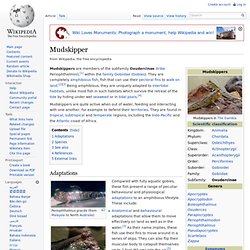 These include: Anatomical and behavioural adaptations that allow them to move effectively on land as well as in the water.[3] As their name implies, these fish use their fins to move around in a series of skips. They can also flip their muscular body to catapult themselves up to 2 feet (60 cm) into the air.[5]The ability to breathe through their skin and the lining of their mouth (the mucosa) and throat (the pharynx). This is only possible when the mudskipper is wet, limiting mudskippers to humid habitats and requiring that they keep themselves moist. Even when their burrow is submerged, mudskippers maintain an air pocket inside it, which allows them to breathe in conditions of very low oxygen concentration.[11][12][13] Species Periophthalmus cantonensis venturing on land See also Muddy the Mudskipper References External links. Tetraodontiformes. Tetraodontidae. Pufferfish are generally believed to be the second-most poisonous vertebrates in the world, after the golden poison frog. 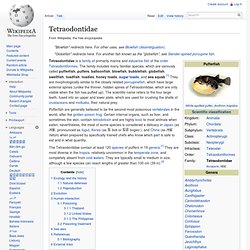 Certain internal organs, such as liver, and sometimes the skin, contain tetrodotoxin and are highly toxic to most animals when eaten; nevertheless, the meat of some species is considered a delicacy in Japan (as 河豚, pronounced as fugu), Korea (as 복 bok or 복어 bogeo ), and China (as 河豚 hétún) when prepared by specifically trained chefs who know which part is safe to eat and in what quantity.

Arachnids. Opiliones. Phalangiidae. The Phalangiidae are a family of harvestmen with about 380 known species. 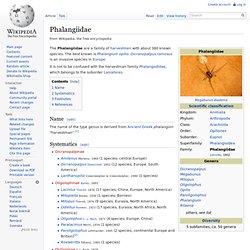 The best known is Phalangium opilio. Dicranopalpus ramosus is an invasive species in Europe. Subfamily Opilioninae. Spiders. Jumping spider. The jumping spider family (Salticidae) contains more than 500 described genera and about 5,000 described species,[2] making it the largest family of spiders with about 13% of all species.[3] Jumping spiders have some of the best vision among arthropods and use it in courtship, hunting, and navigation. 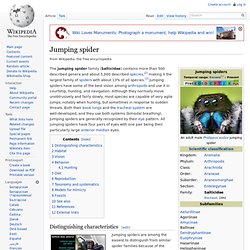 Although they normally move unobtrusively and fairly slowly, most species are capable of very agile jumps, notably when hunting, but sometimes in response to sudden threats. Both their book lungs and the tracheal system are well-developed, and they use both systems (bimodal breathing). Jumping spiders are generally recognized by their eye pattern. All jumping spiders have four pairs of eyes with one pair being their particularly large anterior median eyes. Marpissinae. Euophryinae. Mammals. Diprotodontia. Petauridae. All petaurids have obvious facial markings, a well-defined dorsal stripe, very large lower front incisors, and four-cusped molars. 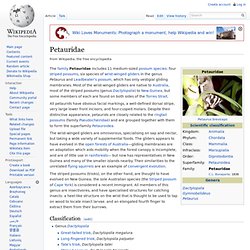 Despite their distinctive appearance, petaurids are closely related to the ringtail possums (family Pseudocheiridae) and are grouped together with them to form the superfamily Petauroidea. The wrist-winged gliders are omnivorous, specialising on sap and nectar, but taking a wide variety of supplemental foods. The gliders appears to have evolved in the open forests of Australia—gliding membranes are an adaptation which aids mobility when the forest canopy is incomplete, and are of little use in rainforests— but now has representatives in New Guinea and many of the smaller islands nearby. Cetacea. Balaenidae.

Characteristics[edit] Balaenids are large whales, with an average adult length of 15 to 17 metres (45–50 feet), and weighing 50-80 tonnes. 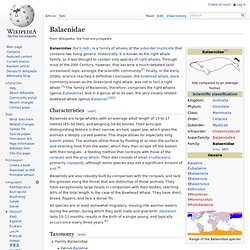 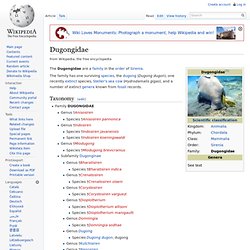 Taxonomy[edit] The genera Eosiren, Eotheroides, and Prototherium have been assigned to Halitheriinae in the past, but recent cladistic analysis recovers these genera as basal to the clade formed by Trichechidae and Dugongidae. Moreover, Halitheriinae is paraphyletic with respect to Dugonginae and Hydrodamalinae, and further use of the name should be discontinued because the type genus is based on a non-diagnostic tooth.[3]

Trichechidae. Definition from Wiktionary, the free dictionary Translingual[edit] Trichechus manatus one of three species of Trichechidae. 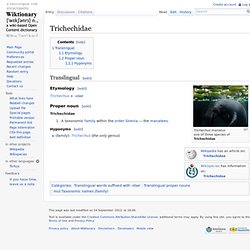 Primates. Hominidae. The Hominidae (/hɒˈmɪnɨdiː/; also known as great apes[notes 1]) form a taxonomic family of primates, including four extant genera: The term "hominid" is also used in the more restricted sense as hominins or "humans and relatives of humans closer than chimpanzees".[2] In this usage, all hominid species other than Homo sapiens are extinct. 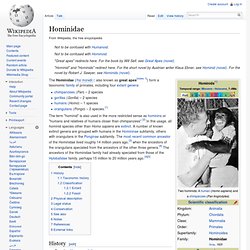 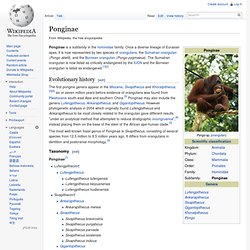 Once a diverse lineage of Eurasian apes, it is now represented by two species of orangutans, the Sumatran orangutan (Pongo abelii), and the Bornean orangutan (Pongo pygmaeus). The Sumatran orangutan is now listed as critically endangered by the IUCN and the Bornean orangutan is listed as endangered.[1][2] Evolutionary history[edit] The first pongine genera appear in the Miocene, Sivapithecus and Khoratpithecus,[3][4] six or seven million years before evidence of orangutans was found from Pleistocene south-east Asia and southern China.[5] Ponginae may also include the genera Lufengpithecus, Ankarapithecus, and Gigantopithecus.

The most well-known fossil genus of Ponginae is Sivapithecus, consisting of several species from 12.5 million to 8.5 million years ago. Homininae. Homininae is a subfamily of Hominidae that includes humans, gorillas, chimpanzees, bonobos and some extinct relatives; it comprises all hominids that arose after the split from orangutans (Ponginae). The Homininae cladogram has three main branches, which lead to gorillas, chimpanzees and bonobos, and humans. There are several extant species of chimpanzees and gorillas, but only one human species remains, although traces of several hypothetical species have been found with dates as recent as 12,000 years ago (Homo floresiensis, Homo denisova). Organisms in this class are described as hominine or hominines (not to be confused with hominin or hominini).

Hominini. Through DNA comparison, scientists believe the Pan / Homo divergence occurred between 5.4 and 6.3 million years ago, after an unusual process of speciation that ranged over 4 million years.[5] Few fossil specimens on the Pan side of the split have been found, the first fossil chimpanzee discovery being published in 2005,[6] dating to between 545 ± 3 kyr (thousand years) and 284 ± 12 kyr via Argon-argon dating, from Kenya's East African Rift Valley. Hominina. Taxonomy[edit] See also[edit] List of human evolution fossils (with images) Daubentoniidae (primate family) Carnivora. Odobenidae. Odobenidae is a family of Pinnipeds. The only living species is walrus. In the past, however, the group was much more diverse, and includes more than ten fossil genera. Taxonomy[edit] All genera, except Odobenus, are extinct.

Felidae. Extant felids belong to one of two subfamilies: Pantherinae (which includes the tiger, the lion, the jaguar, and the leopard), and Felinae (which includes the cougar, the cheetah, the lynxes, the ocelot, and the domestic cat). The first felids emerged during the Oligocene, about 25 million years ago. In prehistoric times, a third subfamily, the Machairodontinae, included the "saber-toothed cats", such as the well-known Smilodon.

Felinae. Mustelidae. Otter. Etymology[edit] The word otter derives from the Old English word otor or oter. This, and cognate words in other Indo-European languages, ultimately stem from the Proto-Indo-European language root *wódr̥, which also gave rise to the English word "water".[1][2] Terminology[edit] An otter's den is called a holt or couch. Mongoose. Name[edit] The word "mongoose" is derived from the Marathi name mungus (मुंगूस) (pronounced as [muŋɡuːs]), perhaps ultimately from Dravidian (cf. Rodents. New World porcupine. Characteristics[edit] Porcupine. Lagomorphs. Rabbit. Leporidae. Birds. Apodiformes. Hummingbird. Hummingbirds are New World birds that constitute the family Trochilidae. They are among the smallest of birds, most species measuring in the 7.5–13 cm (3–5 in) range. Indeed, the smallest extant bird species is a hummingbird, the 5-cm Bee Hummingbird.

They are known as hummingbirds because of the humming sound created by their beating wings which flap at high frequencies audible to humans. They hover in mid-air at rapid wing flapping rates, typically around 50 times per second,[1] but possibly as high as 200 times per second, allowing them also to fly at speeds exceeding 15 m/s (54 km/h; 34 mph),[2] backwards or upside down.[3][4] Hummingbirds have the highest metabolism of any homeothermic animal.[5] To conserve energy when food is scarce, they have the ability to go into a hibernation-like state (torpor) where their metabolic rate is slowed to 1/15th of its normal rate.[6] The smallest species of hummingbird weighs less than a penny. Diet and specialization for food gathering[edit] Trochilinae. Charadriiformes. Auk. Gruiformes. Rallidae. Sphenisciformes. Category:Spheniscidae. Penguin.