Privilege-checking and call-out culture. : "...what's the biggest challenge we deal with every day? 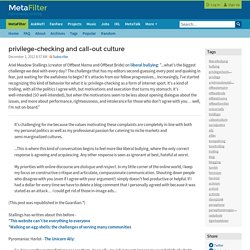 The challenge that has my editors second-guessing every post and quaking in fear, just waiting for the awfulness to begin? It's attacks from our fellow progressives... Increasingly, I've started recognizing this kind of behavior for what it is: privilege-checking as a form of internet sport. It's a kind of trolling, with all the politics I agree with, but motivations and execution that turns my stomach. It's well-intended ( well-intended), but when the motivations seem to be less about opening dialogue about the issues, and more about performance, righteousness, and intolerance for those who don't agree with you… well, I'm not on-board. " (This post was republished in the Guardian.*) Stallings has written about this before - *This website can't be everything to everyone *Walking on egg-shells: the challenges of serving many communities. Dailykos. Like many systems of oppression, it is entirely unconscious and not meant to be offensive. 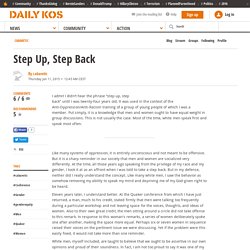 But it is a sharp reminder in our society that men and women are socialized very differently. At the time, all those years ago speaking from the privilege of my race and my gender, I took it at as an affront when I was told to take a step back. But in my defense, neither did I really understand the concept. Like many white men, I saw the behavior as somehow removing my ability to speak my mind and depriving me of my God-given right to be heard. Eleven years later, I understand better. White men, myself included, are taught to believe that we ought to be assertive in our own opinions and proud of their soundness. Even so, the same patterns reinforced themselves over time. The women who shared in the earlier example were clearly uncomfortable somewhat with speaking up. When we discuss step up, stand-back we need to take the topic itself into account.

The Toe Rule for Allies – en. I’ve been working on trans issues as a non-trans person for long, long time, and there’s really one rule that I find the most useful. 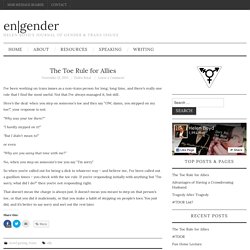 Not that I’ve always managed it, but still. Here’s the deal: when you step on someone’s toe and they say “OW, damn, you stepped on my toe!” , your response is not: Calling In: A Quick Guide on When and How. Nobody is perfect, but when people screw up and do oppressive things, we need to let them know what they did was wrong. 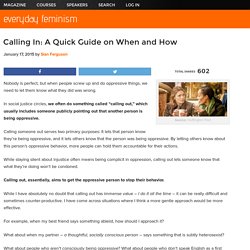 In social justice circles, we often do something called “calling out,” which usually includes someone publicly pointing out that another person is being oppressive. Calling someone out serves two primary purposes: It lets that person know they’re being oppressive, and it lets others know that the person was being oppressive. By letting others know about this person’s oppressive behavior, more people can hold them accountable for their actions.

While staying silent about injustice often means being complicit in oppression, calling out lets someone know that what they’re doing won’t be condoned. Calling out, essentially, aims to get the oppressive person to stop their behavior. So You Call Yourself an Ally: 10 Things All 'Allies' Need to Know. As happens every time that I read something from Black Girl Dangerous, I recently found myself snapping, nodding, and yelling out “YES!” 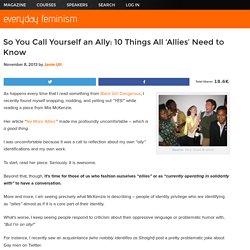 While reading a piece from Mia McKenzie. Her article “No More ‘Allies’” made me profoundly uncomfortable – which is a good thing. I was uncomfortable because it was a call to reflection about my own “ally” identifications and my own work. To start, read her piece. Seriously. Beyond that, though, it’s time for those of us who fashion ourselves “allies” or as “currently operating in solidarity with” to have a conversation. More and more, I am seeing precisely what McKenzie is describing – people of identity privilege who are identifying as “allies” almost as if it is a core part of their identity. What’s worse, I keep seeing people respond to criticism about their oppressive language or problematic humor with, “But I’m an ally!” Aside from expressing my discontent in a tweet, I reached out to her in a private message to explain why I took issue with her joke. 5 Reasons I Refuse to Call Myself An 'Ally' – And Why I Use 'Turncoat' Instead.

I grew up in a home and neighborhood where violence against women and those who presented as feminine was commonplace. 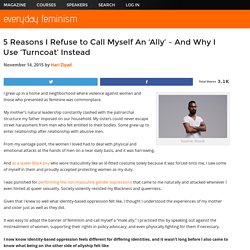 My mother’s natural leadership constantly clashed with the patriarchal structure my father imposed on our household. My sisters could never escape street harassment from men who felt entitled to their bodies. Some grew up to enter relationship after relationship with abusive men. From my vantage point, the women I loved had to deal with physical and emotional attacks at the hands of men on a near daily basis, and it was harrowing. And as a queer Black boy who wore masculinity like an ill-fitted costume solely because it was forced onto me, I saw some of myself in them and proudly accepted protecting women as my duty. On Tone Policing: Why It's Bullshit And Why You Need To Stop. How to deal with being called out. 5 Tips For Being An Ally. 10 Common Things Well-Intentioned Allies Do That Are Actually Counterproductive.

Getting Called Out: How to Apologize. Why I'm not an ally to trans* people (yet) : SRSGSM. I wrote an adaptation of "Love me, I'm a liberal": "love me im an ally" : SRSGSM. Question about being a good trans* ally... : SRSWomen. Do you ever feel that white allies are an example of white people needing to feel relevant even when they're not? : blackladies.

The HRC 'equal sign' logo vs. the pride flag: misappropriation and straight allies : SRSDiscussion. My take on the fundamental problem with the 'ally' term : SRSDiscussion. Require some help, fake allys TW: Abuse : SRSFeminism.