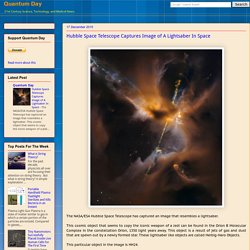 This cosmic object that seems to copy the iconic weapon of a Jedi can be found in the Orion B Molecular Complex in the constellation Orion, 1350 light years away. This object is a result of jets of gas and dust that are spewn out by a newly formed star. These lightsaber like objects are called Herbig-Haro Objects. This particular object in the image is HH24.

Herbig-Haro Objects are young stars that occasionally blast off hot gas and other material into space. Herbig-Haro objects are named after George Herbig and Guillermo Haro who first studied them in detail. Perfectly timed for the release of "Star Wars Episode VII: The Force Awakens", the NASA/ESA Hubble Space Telescope has imaged a cosmic double-bladed lightsabre. This celestial lightsabre lies not in a galaxy far, far away, but within our home galaxy, the Milky Way. Video: Herbig Haro 24: The Force Is Strong With This One. Hubble Finds A Lightsaber in Space. Mysterious Void In Space In Latest MPG/ESO Telescope Image. In the newly released ESO image, the starfield seemed to be devoid of stars in a particular area. 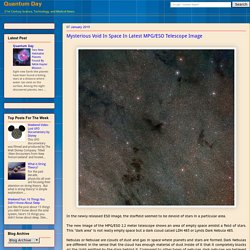 The new image of the MPG/ESO 2.2 meter telescope shows an area of empty space amidst a field of stars. This "dark area" is not really empty space but a dark cloud called LDN 483 or Lynds Dark Nebula 483. Nebulas or Nebulae are clouds of dust and gas in space where planets and stars are formed. Twenty Years Later: Hubble Telescope Recaptures Pillars of Creation in HD. The Pillars of Creation is one of the most memorable and iconic images taken by the NASA/ESA Hubble Telescope in 1995. 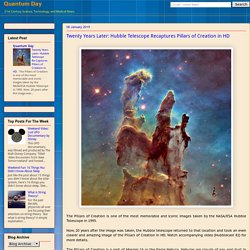 Now, 20 years after the image was taken, the Hubble telescope returned to that location and took an even clearer and amazing image of the Pillars of Creation in HD. Watch accompanying video (Hubblecast 82) for more details. Star Cluster NGC 3293 Nestled Against Clouds of Gas and Dust in the Carina Constellation. ESO’s La Silla Observatory in Chile released a striking image of star cluster NGC 3293 with clouds of glowing red gas and streaks of dust in the background. 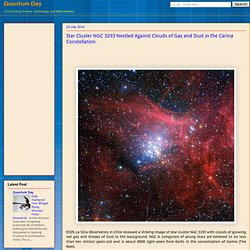 NGC is composed of young stars are believed to be less than ten million years old and is about 8000 light-years from Earth in the constellation of Carina (The Keel). Using the Wide Field Imager (WFI) installed on the MPG/ESO 2.2-meter telescope at the observatory, astronomers study young star clusters such as NGC 3293 to learn more about the evolution of stars.

Star cluster are groups of stars that are held together by their own gravitational fields. Binary Star Systems May Explain Formation of Mysterious Magnetars. Scientists may have found the explanation on how a magnetar is formed. 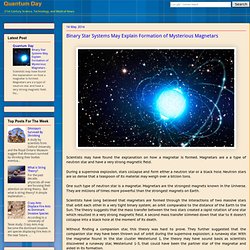 Bubble Shaped Planetary Nebula Abell 33 In Hydra Constellation Imaged. A Nebula is an interstellar cloud made up of dist and gases. 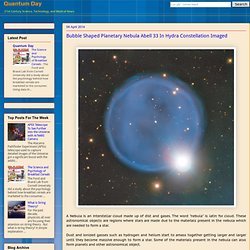 The word "nebula" is latin for cloud. These astronomical objects are regions where stars are made due to the materials present in the nebula which are needed to form a star. Dust and ionized gasses such as hydrogen and helium start to amass together getting larger and larger until they become massive enough to form a star. New 3D Model Gives Insight On How Supernovas are Formed. A new model on how supernovas are formed was presented that can explain certain properties of supernovas that existing models cannot. 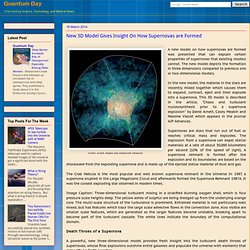 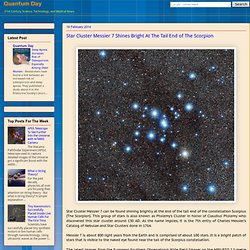 This group of stars is also known as Ptolemy's Cluster in honor of Claudius Ptolemy who discovered this star cluster around 130 AD. VLT Successfully Maps Surface Features Of Brown Dwarf Luhman 16B. The European Southern Observatory for the first time has mapped the surface of a brown dwarf. 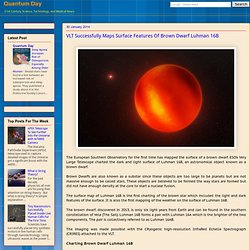 ESO's Very Large Telescope charted the dark and light surface of Luhman 16B, an astronomical object known as a brown dwarf. Brown Dwarfs are also known as a substar since these objects are too large to be planets but are not massive enough to be called stars. These objects are believed to be formed the way stars are formed but did not have enough density at the core to start a nuclear fusion. VLT Survey Telescope Captures Messier 8 Lagoon Nebula in Rich Detail. The European Southern Observatory used its VLT Survey Telescope at Paranal Observatory in Chile to capture the image of the Lagoon Nebula in rich detail. 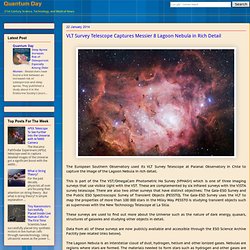 This is part of the The VST/OmegaCam Photometric Hα Survey (VPHAS+) which is one of three imaging surveys that use visible light with the VST. These are complemented by six infrared surveys with the VISTA survey telescope. There are also two other surveys that have distinct objectives; The Gaia-ESO Survey and the Public ESO Spectroscopic Survey of Transient Objects (PESSTO). The Gaia-ESO Survey uses the VLT to map the properties of more than 100 000 stars in the Milky Way. PESSTO is studying transient objects such as supernovas with the New Technology Telescope at La Silla. APEX Telescope To See Further into the Universe with ArTeMiS Camera. The Atacama Pathfinder Experiment (APEx) telescope used to capture detailed images of the Universe got a significant boost with the addition of the ArTeMiS camera.

Artemis will help APEX take images faster and with higher pixel resolutions. The ArTeMiS camera is a large bolometer camera in the submillimeter range on APEX. A bolometer is a device that is used to measure infrared, or heat, radiation. ARTEMIS stands for Architectures de bolomètres pour des Télescopes à grand champ de vue dans le domaine sub-Millimétrique au Sol which in English translates to the Bolometer arrays for wide-field submillimetre ground-based telescopes. Sharpest Image of Prawn Nebula (IC 4628) and Star Cluster Collinder 316 Imaged by the ESO. The European Southern Observatory just released the sharpest image of the Prawn Nebula (IC 4628) and the star cluster star, Collinder 316. The Prawn Nebula is 6,000 light years away in the constellation of Scorpius (The Scorpion) A nebula is a cloud of dust and gas where stars are made. Ionized gasses such as helium and hydrogen combine with interstellar dust and start to gain mass.

Circinus X-1 is a binary star system. It is an X-ray binary where one star is a neutron star and the other is an ordinary star. Two star systems or binary star systems orbit each other. New Image of the Orion Molecular Cloud Reveals Fiery Ribbon Like Orange Glow. The Large Apex Bolometer Camera (LABOCA) operated at the ESO-operated Atacama Pathfinder Experiment (APEX) in Chile has imaged the invisible band of gas and dust at the Orion Molecular Cloud in the constellation Orion the Hunter. The constellation Orion is a well known formation of stars that can be seen throughout the world. The name Orion is derived from Greek mythology (Orion the Hunter). Zeus elevates him to the stars upon his death and is also mentioned in Homer's Odyssey where Odysseus sees his shade in the underworld. Combination Reflection Nebula and Emission Nebula in NGC 6559 Imaged. White Dwarf Star Orbiting A Pulsar Discovered By ESO's VLT.

Studying the Evolution of a Supernova Through Supernova Remnant 1987A. Astronomers are intensively studying Supernova Remnant 1987A to find out more about the inner workings of stars, supernovas, and how they interact with the surroundings. A supernova is an astronomical event where a star runs out of fuel or reaches critical mass and explodes. Bright Blue Young Stars in Star Cluster NGC 2547. Star Clusters are groups of stars that are held together by each other's gravity. Lobster Nebula NGC 6357 Imaged In Infrared By VISTA Telescope. Bok Globule Barnard 86 - A Dark Cloud Against A Sea Of Stars. Seagull Nebula IC 2177 Shows Off Its Wings. Nebulae or nebulas are regions in space where astronomers believe stars are formed.

Nebulae are composed of clouds gas and dust that start to clump together to form stars and even planets. Just like the clouds in the sky, these nebulae also seem to form various forms that resemble animals or things such as the Seagull Nebula or IC 2177. Reflection Nebula NGC 1999 in Orion Imaged By APEX LABOCA Camera.