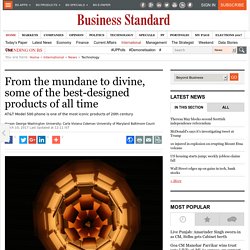 It is pleasing to look at, easy to use and solves a common problem. We reached out to five design professors and posed the following question: What’s the best-designed product of all time, and why? Their responses vary from cheap, everyday products to newer, more expensive ones. But all share a story of trial, error and ingenuity. Cutting the glare Catherine Anderson, The George Washington University In the early 1920s, as Danish designer Poul Henningsen observed Copenhagen at night, he lamented the quality of light in people’s homes.

Henningsen set out to create a new design that would mitigate this “dismal” effect; it would be “…constructed with the most difficult and noble task in mind: lighting in the home.” “The aim is to beautify the home and who lived there,” he wrote, “to make the evening restful and relaxing.” His approach was scientific. In 1924, the “PH lamp” was born. It’s delightful to look at. Terminal waits Craig M. How the Soviets invented the internet and why it didn't work. On the morning of 1 October 1970, the computer scientist Viktor Glushkov walked into the Kremlin to meet with the Politburo. 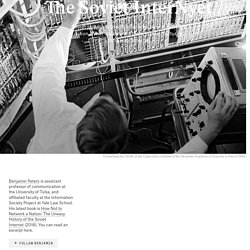 He was an alert man with piercing eyes rimmed in black glasses, with the kind of mind that, given one problem, would derive a method for solving all similar problems. And at that moment the Soviet Union had a serious problem. A year earlier, the United States launched ARPANET, the first packet-switching distributed computer network that would in time seed the internet as we know it. The distributed network was originally designed to nudge the US ahead of the Soviets, allowing scientists’ and government leaders’ computers to communicate even in the event of a nuclear attack.

It was the height of the tech race, and the Soviets needed to respond. Glushkov’s idea was to inaugurate an era of electronic socialism. But when Glushkov entered the cavernous room that morning, he noticed two empty chairs at the long table: his two strongest allies were missing. Is Keck’s Law Coming to an End? Since 1980, the number of bits per second that can be sent down an optical fiber has increased some 10 millionfold. 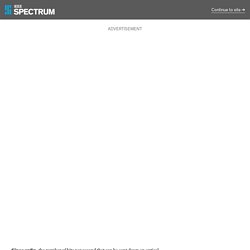 That’s remarkable even by the standards of late-20th-century electronics. It’s more than the jump in the number of transistors on chips during that same period, as described by Moore’s Law. There ought to be a law here, too. Call it Keck’s Law, in honor of Donald Keck. He’s the coinventor of low-loss optical fiber and has tracked the impressive growth in its capacity. Moore’s Law may get all the attention. Now, as electronics faces enormous challenges to keep Moore’s Law alive, fiber optics is also struggling to sustain the momentum. The heart of today’s fiber-optic connections is the core: a 9-micrometer-wide strand of glass that’s almost perfectly transparent to 1.55-µm, infrared light. The Information Liar Paradox: A Problem for Floridi’s RSDI Definition. Three meanings of “technology”

A year of tech industry hype in a single graph. Tech industry trends follow a fairly predictable pattern: there's a rush of hype, an inevitable backlash, and then a long, tired slog towards a product that actually works. 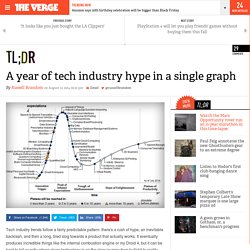 It eventually produces incredible things like the internal combustion engine or my Droid 4, but it can be hard to tell exactly where given technology is on the slow journey from bullshit to reality. Luckily, the analysts at Gartner have given us a kind of roadmap, plotting out the trends of 2014 on an immutable line they call the Hypecycle. Gartner has been making these for 20 years, and there's always a lot of guesswork involved, but this one's particularly useful as a snapshot of the present moment.

Speech recognition is just starting to be useful (hello, Siri), and virtual reality decks like the Oculus Rift are getting there. People have stopped saying "big data" as much, but "internet of things" is still ascendant, and god help us once "neurobusiness" gets going.