Untitled. ICT-mastery.eu - Welcome. Blockchain Jobs and Projects. Ethical software development: Ask Uber and Volkswagen. Uber is the latest company to get caught out for using software to help it overcome official audits and tests. 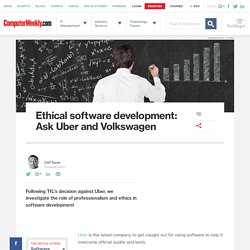 Among the reasons Transport for London (TfL) gave in September 2017 for not renewing Uber’s licence to operate in London was the software the app-based taxi firm developed to avoid officials inspecting its drivers. By submitting your personal information, you agree that TechTarget and its partners may contact you regarding relevant content, products and special offers. You also agree that your personal information may be transferred and processed in the United States, and that you have read and agree to the Terms of Use and the Privacy Policy. While newspaper commentary has largely been about the Licensed Taxi Drivers’ Association, which represents black cab drivers in London, lobbying TfL against Uber, an important part of its decision was Uber’s stealth software. Ethics: How to handle a difficult conversation David Evans, BCS director of policy and community. Forbes Welcome. CGMA competency framework. 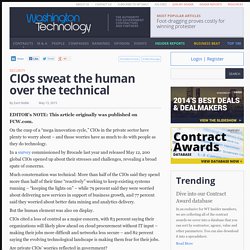 On the cusp of a “mega innovation cycle,” CIOs in the private sector have plenty to worry about – and those worries have as much to do with people as they do technology. In a survey commissioned by Brocade last year and released May 12, 200 global CIOs opened up about their stresses and challenges, revealing a broad spate of concerns. Much consternation was technical: More than half of the CIOs said they spend more than half of their time “reactively” working to keep existing systems running – “keeping the lights on” – while 79 percent said they were worried about delivering new services in support of business growth, and 77 percent said they worried about better data mining and analytics delivery.

But the human element was also on display. Are private CIOs’ worries reflected in government? “Do we have innovation in the leaders who are driving change?” European eCompetence Framework. International Professional Managers Association. Home > Management Competences A professional manager must have suitable characteristics and qualities to be able to function effectively. 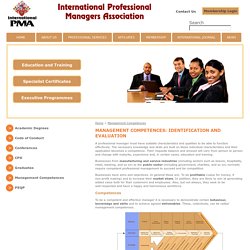 The necessary knowledge and skills are built on these individual characteristics and their application becomes a competence. Their requisite balance and amount will vary from person to person and change with maturity, experience and, in certain cases, education and training. Businesses from manufacturing and service industries (including sectors such as leisure, hospitality, retail, banking, and so on) to the public sector (including government, charities, and so on) normally require competent professional management to succeed and be competitive. Businesses have aims and objectives. Competences To be a competent and effective manager it is necessary to demonstrate certain behaviour, knowledge and skills and to achieve agreed deliverables. 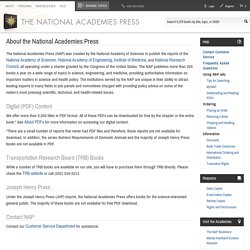 The NAP publishes more than 200 books a year on a wide range of topics in science, engineering, and medicine, providing authoritative information on important matters in science and health policy. The institutions served by the NAP are unique in their ability to attract leading experts in many fields to join panels and committees charged with providing policy advice on some of the nation’s most pressing scientific, technical, and health-related issues. Digital (PDF) Content We offer more than 5,000 titles in PDF format. All of these PDFs can be downloaded for free by the chapter or the entire book.* See About PDFs for more information on accessing our digital content. 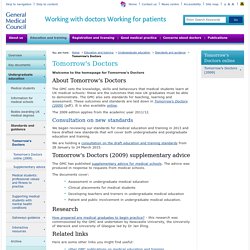 The GMC also sets standards for teaching, learning and assessment. These outcomes and standards are laid down in Tomorrow's Doctors (2009) (pdf). It is also available online. CanMEDS. CanMEDS 2015 Series IV NOW AVAILABLE On March 3, the Royal College released the Series IV Draft of the CanMEDS 2015 Framework. 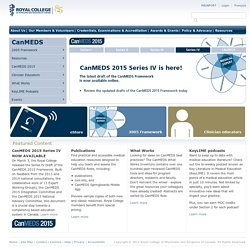 Built on feedback from the 2013 and 2014 national consultations, the collaborative work of 13 Expert Working Groups), the CanMEDS 2015 Integration Committee and the CanMEDS 2015 National Advisory Committee, this document is a crucial step towards a competency based education system in Canada. Learn more Publications. It's too soon to abandon CIOs. Management It's too soon to abandon CIOs The recent resignations of U.S. 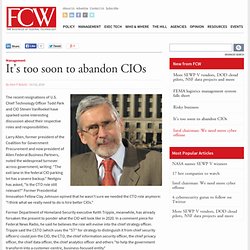 Chief Technology Officer Todd Park and CIO Steven VanRoekel have sparked some interesting discussion about their respective roles and responsibilities. Larry Allen, former president of the Coalition for Government Procurement and now president of Allen Federal Business Partners, noted the widespread turnover across government, writing: "The exit lane in the federal CIO parking lot has a severe backup.

" Nextgov has asked, "Is the CTO role still relevant? " Former Department of Homeland Security executive Keith Trippie, meanwhile, has already forsaken the present to ponder what the CIO will look like in 2020. But I, for one, would feel much more comfortable scrapping the Clinger-Cohen Act paradigm of 1996 if we had ever actually tried or achieved what Rep. So let's dispel some misconceptions that seem to exist today: Home. ICCP -The standard in certification for business intelligence, data management and computing.