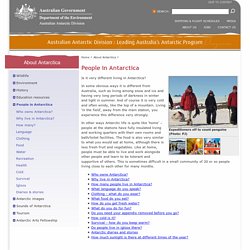 In some obvious ways it is different from Australia, such as living among snow and ice and having very long periods of darkness in winter and light in summer. And of course it is very cold and often windy, like the top of a mountain. Living ‘in the field’, away from the main station, you experience this difference very strongly. In other ways Antarctic life is quite like ‘home’ – people at the stations have fully insulated living and working quarters with their own rooms and bath/toilet facilities. The food is also very similar to what you would eat at home, although there is less fresh fruit and vegetables. Employment in Antarctica. IntroductionNews and OpportunitiesTypes of JobsEmployersEmployment ConditionsThe RealityApplyingThe Good and the BadPhotos of People Working in Antarctica Introduction. 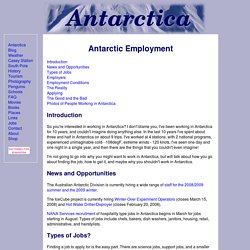 Antarctica Jobs. Are you looking for a truly unique, challenging and rewarding work assignment? 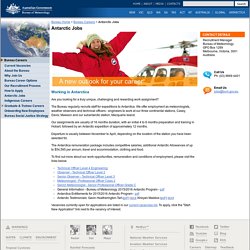 The Bureau regularly recruits staff for expeditions to Antarctica. We offer employment as meteorologists, weather observers and technical officers - engineers to work at our three continental stations, Casey, Davis, Mawson and our subantarctic station, Macquarie Island. Our assignments are usually of 16 months duration, with an initial 4 to 6 months preparation and training in Hobart, followed by an Antarctic expedition of approximately 12 months. Departure is usually between November to April, depending on the location of the station you have been selected for. 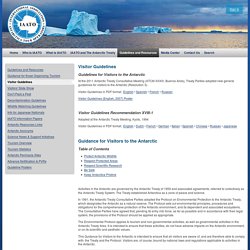 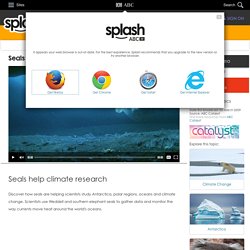 Scientists use Weddell and southern elephant seals to gather data and monitor the way currents move heat around the world's oceans. Duration: 3 mins 45 secs Source : ABC Catalyst Learning area: Science Secondary: Years 8, 10 Before viewing Why are scientists studying the ocean and ice in Antarctica? What traditional tools might scientists use to study the world's oceans? As you view Dr Steve Rintoul says Antarctica is a big blind spot for oceanographers.

Watch what scientists do with transmitters. What are the natural behaviours and abilities of seals that make them useful to ocean scientists? After viewing The data collected helps scientists understand how oceans transport heat around the globe. How does using seals compare with traditional methods of measuring ocean changes? What's polluting the whales? - Science (7,10) - ABC Splash - Overview Explore how chemical pollutants affect the Antarctic food web. 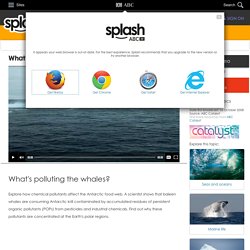 A scientist shows that baleen whales are consuming Antarctic krill contaminated by accumulated residues of persistent organic pollutants (POPs) from pesticides and industrial chemicals. Find out why these pollutants are concentrated at the Earth's polar regions. Human impacts in Antarctica. Antarctica is often thought of as a pristine land untouched by human disturbance. 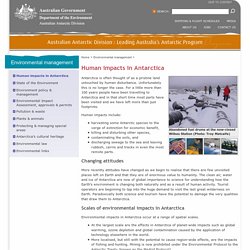 Unfortunately this is no longer the case. For a little more than 100 years people have been travelling to Antarctica and in that short time most parts have been visited and we have left more than just footprints. Human impacts include: harvesting some Antarctic species to the verge of extinction for economic benefit, killing and disturbing other species, contaminating the soils, and discharging sewage to the sea and leaving rubbish, cairns and tracks in even the most remote parts.

Chronologies & Timelines of Antarctic Exploration. This chronology was prepared by Robert K. 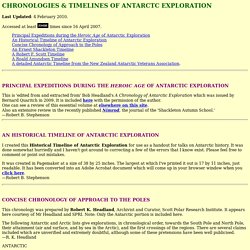 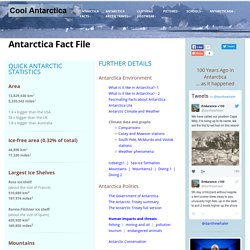 Ice Antarctica has 70% of all the world's freshwater frozen as ice - and 90% of all the world's ice. Thickness. About Antarctica. OneWorld Magazine - ANTARCTICA: TERRA INCOGNITA. Antarctic Summer. Glacial dreaming The Mertz Glacier, named for Swiss explorer Xavier Mertz who died during an Australian expedition with Douglas Mawson in 1913 and whose body most likely remains in the glacier today, is an inhospitable, remote part of Antarctica between Cape de la Motte and Cape Hurley. 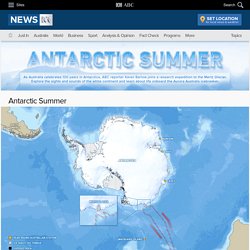 The glacier was renowned for an exposed ice tongue poking 40 kilometres out from the Antarctic continent but in early 2010 a 97-kilometre long iceberg smashed into Mertz, resulting in the calving of a massive chunk of the ice tongue. In January 2011, a team of nearly 40 Australian and international scientists braved the Southern Ocean to deploy underwater cameras, moorings and sensors to study the glacier and its surrounding waters, with the mission of uncovering new information about the Earth's changing climate.

Related links Interactive: Super icebreaker The Aurora Australis has been at the centre of Australia's research in Antarctic since the super icebreaker was launched in 1990. A world of white Credits.