Resources for the 2.1 assignment

Volume Extended Reads - Volume: Making Music in Aotearoa. A song may begin with a few strums on a guitar or some catchy beats, but once it is performed it becomes more than what you can hear. 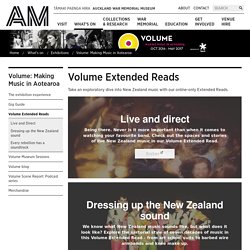 Lyrics aren't the only channel for getting a message across. A musician's look can champion a cause, turn heads, influence audiences or remind a rising star of where it all began. 'I wear my leather jacket like a great big hug' It is a now\-famous [leather jacket]( that connected The Chills' Martin Phillipps to the past.

Normally associated with toughness, his jacket became the subject of a song written to honour its previous owner, bandmate Martyn Bull who died of leukemia in 1984. Sophistication, style, and matching outfits \- it's a look that demands attention and adds a large dose of star power to the stage. Tami Neilson is one such star who goes for this look. Judy also worked with Tami to design a striking yellow dress and coat trimmed with feathers for the 2016 Vodafone New Zealand Music Awards. 'I absolutely love making clothes for Tami. #AMVolume. NZ On Screen. Public protest. A public protest allows people to complain about something they think is wrong, and build support to change it. 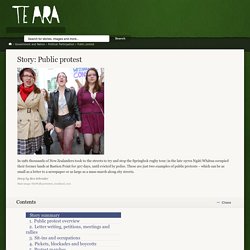 Most target politicians. The Bill of Rights Act guarantees the right to public protest. Most protests are in towns and cities. In Wellington, protesters often march to Parliament and are addressed by MPs. Letters and petitions People write to a newspaper or a politician to highlight an issue and start debate. Petitions collect signatures to ask that a grievance be considered (usually by Parliament or a local authority). The women’s suffrage petitions were signed by more than 30,000 people in the 1880s and 1890s. Meetings and rallies At meetings protest leaders make speeches, and those attending may decide on resolutions and actions. Rallies are held outside.

Sit-ins and occupations These occur when a group occupies a place to highlight a grievance. VietnamWar.govt.nz, New Zealand and the Vietnam War. There was a vocal and well-organised anti-war movement in New Zealand. Worldwide protest against the war centred on the policies and actions of the United States government. Critics of the war accused the New Zealand government of simply doing what the US told it to, and called for a more independent, less submissive foreign policy position. Opponents of the war also questioned whether communism posed any real threat to New Zealand. 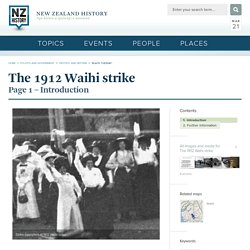 The 'Red Feds' An Australian-born stationary-engine driver, Evans belonged to the militant Waihi Trade Union of Workers. Led by Bill Parry, also Australian-born, this was affiliated to the New Zealand Federation of Labour ('Red Feds') and was implacably opposed to the Waihi Goldmining Company. In May 1912 the union went on strike in protest at the formation of a breakaway union for engine-drivers, which they alleged was backed by the company. The local police inspector initially adopted a low-key response to the dispute, but he was overruled by the tough Police Commissioner John Cullen, who ordered extra forces to be sent to the town. 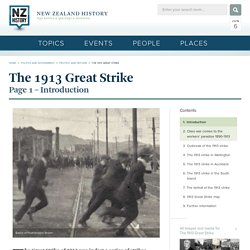 It was one of New Zealand’s most violent and disruptive industrial confrontations. Between 14,000 and 16,000 workers went on strike, out of a population of just over one million. The strike wave of October 1913 began with two relatively small disputes: one at a Huntly coal mine, the other on the Wellington waterfront. Try Revolution. Search Menu <div class='widget_title_videoplayer'><div class='form_messages'><div><div><h2 class='h2'> Video Player </h2><p class='error'> Please enable javascript </p><p> NZ On Screen makes use of JavaScript to present video. 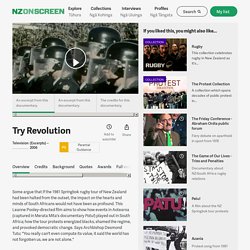