Stay on track at uni by avoiding these habits. By Alyssa Abel University is an opportunity to learn more about yourself while you’re making memories. 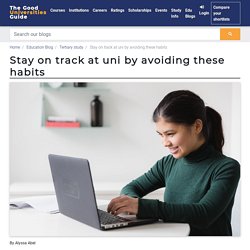 You can meet lifelong friends, enjoy wonderful experiences and find the path to your future. That said, it's also essential to prioritise your progress and productivity, practise discipline and build good habits you can carry into adulthood. Avoid these common student pitfalls and turn them into positive choices instead.

For those in first year, this newfound freedom can lead to challenges and habits that need to change, especially when it comes to your coursework. Here are five bad habits to avoid — and what to do instead — to put you on the right track as a student. 1. When you have to wake up at 6.30am every Monday for statistics, it's very tempting to snooze the alarm. 2. For most students, university offers a chance for new experiences. 3. When you're a student, it often feels like you're always on the move. 4. Of course, you don't need to stay at school for the entire year. 5.

What are the best flexible jobs for uni students? Are you tired of wondering which flavour of ramen or two-minute noodles to make for dinner? 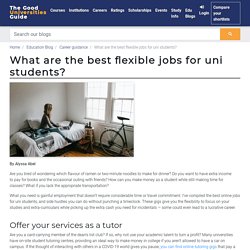 Do you want to have extra income to pay for books and the occasional outing with friends? How can you make money as a student while still making time for classes? What if you lack the appropriate transportation? What you need is gainful employment that doesn’t require considerable time or travel commitment. I’ve compiled the best online jobs for uni students, and side hustles you can do without punching a timeclock. Offer your services as a tutor Are you a card-carrying member of the dean’s list club? Walk Dogs One of the biggest challenges with traditional part-time work is that you rarely control your assigned hours.

You don’t need any mental power to exercise a pooch, so hang up posters advertising your services on community bulletin boards, and maybe post in local Facebook groups. Humanities graduates earn more than those who study science and maths. Education minister Dan Tehan has announced changes to funding rates for university courses as part of a plan to create “job ready graduates”. 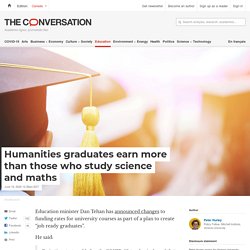 He said: Projections prepared before the COVID-19 pandemic showed that over the five years to 2024 it is expected that the overwhelming majority of new jobs will require tertiary qualifications – and almost half of all new jobs will go to someone with a bachelor or higher qualification. Under the new plan, students doing teaching, nursing, clinical psychology, English and languages will pay 46% less for their degree from next year. Students in agriculture and maths will pay 62% less, while those studying science, health, architecture, environmental science, IT, and engineering will be 20% better off.

But the student contribution for the humanities will go up by 113%, and the costs for law and commerce will jump by 28%. The rationale is to encourage students to select courses with the best employment outcomes. If the government listened to business leaders, they would encourage humanities education, not pull funds from it. The federal government’s announcement they will more than double the cost of humanities and communications degrees for university students has taken the sector by surprise – not least because it goes against increasing evidence that these programs are the key to our nation’s future success. 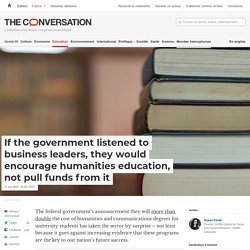 À lire aussi : Fee cuts for nursing and teaching but big hikes for law and humanities in package expanding university places If the government wants to support university courses that lead to jobs, they’d do well to listen to their business leaders who have been quite clear, in recent years, about the sorts of graduates they’re looking for. Business leaders call for humanities Chief Executive of the Business Council of Australia, Jennifer Westacott, said in a 2016 speech all 21st century successful leaders would need “some form of humanities perspective and education”. They found 72% of employers “demanded” communication skills when hiring, but only 27% of potential hires actually had those skills. Morrison's VET reforms offer the same old promises, with no more money. Prime Scott Morrison last week outlined a plan to create jobs and revitalise the economy post COVID-19. 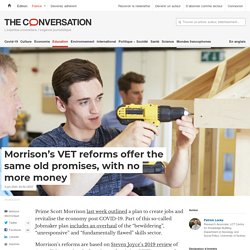 Part of this so-called Jobmaker plan includes an overhaul of the “bewildering”, “unresponsive” and “fundamentally flawed” skills sector. Morrison’s reforms are based on Steven Joyce’s 2019 review of Australia’s vocational education and training (VET) system, of which all recommendations were accepted by the federal government. But actors in the sector may be sceptical of the “overhaul” based on their experience of past changes. Reforms in 2014 were similarly aimed at making VET more responsive to industry needs and cutting red tape, all the while pulling funding from the sector.

À lire aussi : The government keeps talking about revamping VET – but is it actually doing it? The end result was a substantial contraction of the sector, as well as significant rorting by private organisations. What’s happened since the last reforms? The sector has also shrunk.