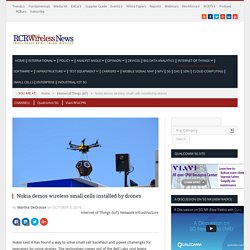 The technology comes out of the Bell Labs unit Nokia acquired when it bought Alcatel-Lucent. The solution will use drones to deposit solar-powered units called F-Cells on rooftops, and these will connect wirelessly to 64-antenna massive multiple-input multiple-output systems. Each antenna system will support eight F-Cells. In a recent test in Silicon Valley, an F-Cell was installed by a drone and then the unit self-powered, self-configured, and automatically connected to the network. No fiber or power cables were used. Wirelessly powered drone enables indefinite flight time. A drone capable of being powered by wireless induction, allowing it to stay airborne indefinitely, has been demonstrated by Imperial College London scientists. 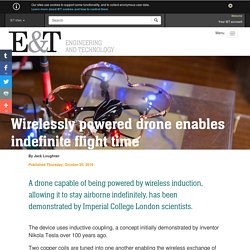 The device uses inductive coupling, a concept initially demonstrated by inventor Nikola Tesla over 100 years ago. Two copper coils are tuned into one another enabling the wireless exchange of power at a certain frequency. Although experiments have been conducted using this technology for decades, this is the first time it has been demonstrated wirelessly powering flying devices. A retail quadcopter drone, measuring approximately 12 centimetres, was used to prove that the method works. Drone receives wireless power, on the fly. Given that the battery life of most multicopter drones typically doesn't exceed 30 minutes of flight time per charge, there are many tasks that they simply can't perform. 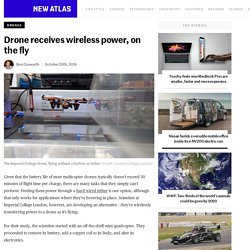 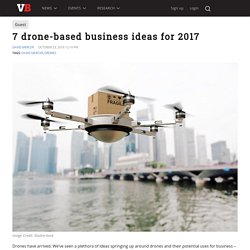 We’ve seen a plethora of ideas springing up around drones and their potential uses for business – aerial surveying and reporting, real estate assessment, wedding photos, sports action photos, to name a few. And with plenty of new software and hardware coming out all the time, the opportunities for drone-oriented startups are virtually limitless. But what really interests me are the “crossover” opportunities between drones and other technologies that will give rise to truly new innovation that will change the way we live and work. Wireless broadband initiatives take to the skies, Supplements, Phnom Penh Post. In separate initiatives to extend broadband internet coverage to every corner of the planet, two of the world’s biggest tech companies are developing ambitious plans to use fleets of balloons and drones to deliver wireless internet to those still off the grid. 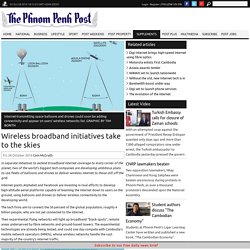 Internet giants Alphabet and Facebook are investing in rival efforts to develop high-altitude aerial platforms capable of beaming the internet down to users on the ground, using balloons and drones to deliver wireless connectivity to the developing world. The tech firms aim to connect the 56 percent of the global population, roughly 4 billion people, who are not yet connected to the internet. Their experimental flying networks will light up broadband “black-spots”, remote areas underserved by fibre networks and ground-based towers. Facebook’s solar-power-run Aquila technology. FACEBOOK Winds will keep the balloons in perpetual motion. The internet space race is on.

Solar Powered Clothing You Can Plug Your Phone Into. If allowing your smartphone to run out of power during the day doesn’t make you feel silly enough, consider this: Every hour it’s idle in your pocket or bag, the sun is bathing the earth in enough energy to run the world economy for a year. 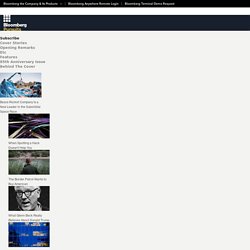 The obvious fix here is to turn every square inch of your body into a power plant—solar could be the ultimate accessory, more important than purses, satchels, or, well, sunglasses. But first, there’s the science part. Wearable technology has been largely constrained to the sartorial periphery—smartwatches, camera-sunglasses, and fitness trackers. Much of the fabric tech in the apparel industry is devoted to things needed for activewear and workout gear: moisture-wicking, stretchiness, breathability. Smart garments have popped up here and there, mostly dealing with athletics and personal care. But beyond all the fancy gadgetry, there’s a much simpler melding of clothing and energy. Facebook Seeks Partner Countries for Drone Trials. Facebook Inc. is in talks with several countries for trial broadcasts of internet content from highflying drones, underscoring the social media company’s push to provide bandwidth to poorly connected parts of the globe. 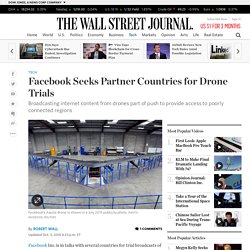 Several companies aim to provide bandwidth to far-flung places that can’t easily be connected by terrestrial links. Alphabet Inc.’s Google this year ran the first tests of its “Project Loon” that seeks to connect users via high-altitude balloons. OneWeb Ltd. is working on a large constellation of satellites to deliver fast global internet service from space. But many of the projects face big obstacles. Drone and balloon projects require approvals from national governments to operate in their airspace. Martin Gomez, Facebook’s director of aeronautical platforms, said a number of countries may be involved in trials. Mr. The demonstrations could take place in 2018, he said, though an exact schedule hasn’t been fixed. Mr. Facebook hasn’t said when Aquila will fly again. Mr. Airnamics, What a big drone you have!! 5 Heavy Lifting Drones - That Are Available on Amazon [2016] Have you been looking for a drone capable of lifting heavy cameras and other objects? 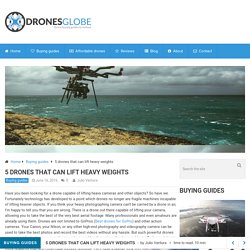