Food | restaurants. Under The Tuscan Gun - The Official Website. Food | drinks. Food | juicing. Five New Cooking Habits I Brought Back from Rome — Life in the Kitchen. It's hard to go anywhere in Italy and not return home with a new outlook on your cooking. 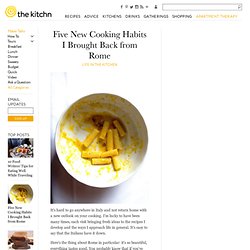 I'm lucky to have been many times, each visit bringing fresh ideas to the recipes I develop and the ways I approach life in general. It's easy to say that the Italians have it down. Here's the thing about Rome in particular: it's so beautiful, everything tastes good. You probably know that if you've been there, or anywhere for that matter where the history is rich and the people care about their food. There is an everyday commonsense feeling to the extraordinary food and drink Romans consume, just as they speed by the Colosseum on their Vespas while we foreigners gawk at its magnificence. This last time I went to Rome, just a few weeks ago, I returned with five pieces of cooking inspiration — nothing new like an ingredient I hadn't heard of, or a crazy recipe to wow my friends, but rather reminders of the Italian way of cooking and how I gravitate toward this way of cooking in my own life. 1. 2. 3. 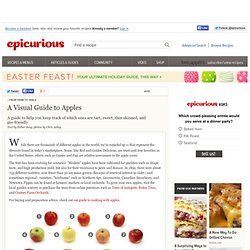 Some, like Red and Golden Delicious, are tried-and-true favorites in the United States; others such as Cameo and Fuji are relative newcomers to the apple scene. The fruit has been evolving for centuries: "Modern" apples have been cultivated for qualities such as shape, taste, and high production yield, but also for their resistance to pests and disease. In 1892, there were about 735 different varieties; now fewer than 50 are mass-grown. Because of renewed interest in older—and sometimes regional—varieties, "heirlooms" such as Northern Spy, Gravenstein, Canadian Strawberry, and Newtown Pippin can be found at farmers' markets or local orchards.

To grow your own apples, visit the local garden nursery or purchase the trees from online purveyors such as Trees of Antiquity, Fedco Trees, and Century Farm Orchards. Sankow's Beaver Brook Farm.

Parmigiano Reggiano® Cheese: The Only Parmesan. Slow Food International. Sitting Down to a Family Meal Is Easier Than You Think. Nutrition Tidbits Podcast Transcript - Restaurateur Meeru Dhalwala talks about healthy home-cooked Indian cuisine. Gloria Tsang, RD: In celebration of May being Asian Heritage month, and inspired by the success of the movie Slumdog Millionaire, we cast this month's spotlight on tasty Indian cuisine. 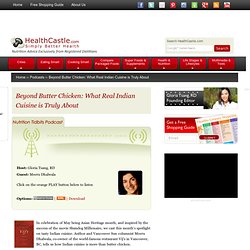 Now, if the image that comes to your mind at the mention of Indian cuisine is butter chicken, then you have a long way to go! Welcome to the Nutrition Tidbits podcast. This is Gloria Tsang, editor-in-chief for HealthCastle.com. Joining me today is author and Vancouver Sun columnist Meeru Dhalwala, co-owner of the world-famous restaurant Vij's in Vancouver, BC. She is here today to tell us how Indian cuisine is more than butter chicken. Thank you for joining me Meeru. All About Meat Cuts and Grilling: Tips from A Chef. (HealthCastle.com) Summer is here, and people everywhere are firing up their grills with thoughts of great-tasting barbecue dishes. 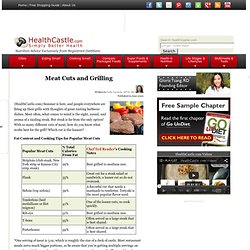 Most often, what comes to mind is the sight, sound, and aroma of a sizzling steak. But steak is far from the only option! With so many different cuts of meat, how do you know what works best for the grill? Which cut is the leanest? Fat Content and Cooking Tips for Popular Meat Cuts. Diary of a Foodie: Diary of a Foodie. Eating Your Way to Happy: Foods that Help Fight Winter Blues. Written by Sofia Layarda, MPH, RD Published in January 2010 (HealthCastle.com) The holidays are over and we're back in the thick of routines, while in most parts of the country, sunshine is in short supply! 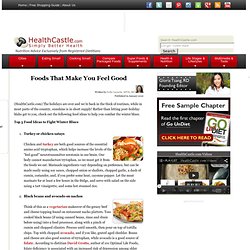 Rather than letting post-holiday blahs get to you, check out the following food ideas to help you combat the winter blues. Top 5 Food Ideas to Fight Winter Blues Turkey or chicken satays Chicken and turkey are both good sources of the essential amino acid tryptophan, which helps increase the levels of the "feel-good" neurotransmitter serotonin in our brain.

Never in a million years would I have picked this recipe out of Veganomicon. But my husband zeroed right in on it--he thought it sounded good. And his instincts were right. Delete olive oil.