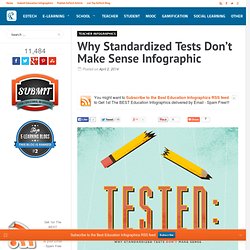 Higher Ed Accrediting Commissions: Transparency for thee, not for me. Why do I keep covering accreditation issues on e-Literate, a blog nominally about online learning and educational technology? 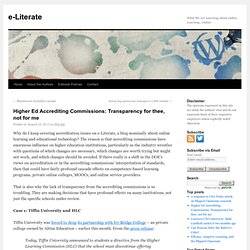 The reason is that accrediting commissions have enormous influence on higher education institutions, particularly as the industry wrestles with questions of which changes are necessary, which changes are worth trying but might not work, and which changes should be avoided. If there really is a shift in the DOE’s views on accreditation or in the accrediting commissions’ interpretation of standards, then that could have fairly profound cascade effects on competency-based learning programs, private online colleges, MOOCs, and online service providers.

That is also why the lack of transparency from the accrediting commissions is so troubling. They are making decisions that have profound effects on many institutions, not just the specific schools under review. Case 1: Tiffin University and HLC. The Rise of the Micro-Celebrity. I’ve read the claims that young Americans in their 20s are selfish, self-absorbed, lazy, and a cultural and moral declension of their predecessors. 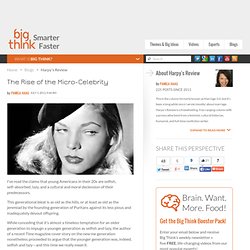 This generational bleat is as old as the hills, or at least as old as the jeremiad by the founding generation of Puritans against its less pious and inadequately devout offspring. While conceding that it’s almost a timeless temptation for an older generation to impugn a younger generation as selfish and lazy, the author of a recent Time magazine cover story on the new me generation nonetheless proceeded to argue that the younger generation was, indeed, selfish and lazy—and this time we really mean it. I haven’t had many occasions to observe millennials in the workplace. Education System Stifles Creativity, Say Teachers, Parents.

Is Formality In The Workplace Dead? Business is traditionally a fairly formal sphere of life. 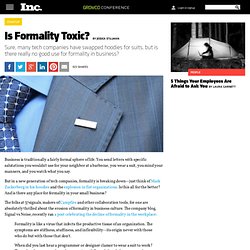 You send letters with specific salutations you wouldn't use for your neighbor at a barbecue, you wear a suit, you mind your manners, and you watch what you say. But in a new generation of tech companies, formality is breaking down--just think of Mark Zuckerberg in his hoodies and the explosion in flat organizations. Is this all for the better? And is there any place for formality in your small business? The folks at 37signals, makers of Campfire and other collaboration tools, for one are absolutely thrilled about the erosion of formality in business culture.

Formality is like a virus that infects the productive tissue of an organization. A fourth “r” for 21st century literacy - The Answer Sheet. This was written by Cathy N. 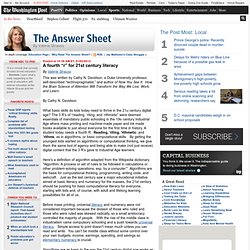 Davidson, a Duke University professor, self-described “technopragmatist,” and author of Now You See It: How the Brain Science of Attention Will Transform the Way We Live, Work, and Learn. By Cathy N. Davidson What basic skills do kids today need to thrive in the 21st century digital age? The 3 R’s of “reading, ‘riting, and ‘rithmetic” were deemed essentials of mandatory public schooling in the 19th century Industrial Age where mass printing and machine-made paper and ink made books available to just about everyone for the first time in history.

Here's a definition of algorithm adapted from the Wikipedia dictionary. Before mass printing, universal literacy and numeracy were not considered important because the division of those who ruled and those who were ruled was skewed radically, so a small aristocracy controlled the majority of people. *If we don't teach kids how to control this dynamic means of production, we will lose it. The 4 R's. Culture Eats Strategy For Lunch. Why Do We Focus On Finland? A Must-Have Guidebook. With schools failing, poor test scores, and dwindling budgets, there’s no doubt that the American education system is in need of reform, but how to go about doing that has been, and undoubtedly will continue to be, a controversial issue among politicians, teachers, students, and parents alike. In recent years, programs like No Child Left Behind and Race to the Top have aimed at helping motivate teachers and communities to turn around schools, but unfortunately these reforms seem to have little lasting impact, with some claiming they’ve done more harm than good.

So what can work to really reform American schools? There is no easy answer, but many are looking to Finland as a model of how to build an education system that really works. Over the past decade, Finland’s students have consistently scored near or at the top of international assessments regardless of economic or social background, despite spending fewer hours in school than their American counterparts. Teachers are in charge. Universities should focus on unique value proposition.