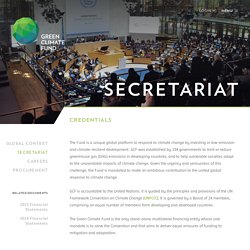 He was appointed by the GCF Board at its 14th meeting and took office on 10 January 2017. He is the second Executive Director of the Fund. Ambassador Bamsey has spent most of his career in international diplomacy and public service. Coalition for Advancing Low Carbon Fuels Launches at COP22. A massive scale-up in renewable energy deployment is vital to fully decarbonize the global energy system by 2050, which is required to meet the ambitions of the Paris Agreement and keep global temperature rise to 2 degrees celsius. 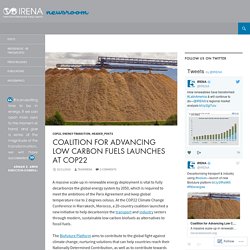 At the COP22 Climate Change Conference in Marrakech, Morocco, a 20-country coalition launched a new initiative to help decarbonize the transport and industry sectors through modern, sustainable low-carbon biofuels as alternatives to fossil fuels. The Biofuture Platform aims to contribute to the global fight against climate change, nurturing solutions that can help countries reach their Nationally Determined Contribution, as well as to contribute towards the Sustainable Development Goals. 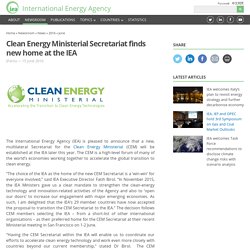 The CEM is a high-level forum of many of the world’s economies working together to accelerate the global transition to clean energy. Pocketbook energy 2016 web final final 1. Myremote Teleworking. ECN - Your energy. Our passion. Energy Innovation Board. My full speech at the #SETPlan16 conference emphasising the role of energy innovation #CleanEnergyEU. European Neighbourhood Policy and Enlargement Negotiations - Energy diplomacy: Commissioner Arias Cañete participates in the Euro-Mediterranean Forum on Energy. Today, the European Commissioner for Climate Action and Energy Miguel Arias Cañete participates in the Euro-Mediterranean Ministerial Energy Meeting in Rome, a key forum under the Union for the Mediterranean to foster energy cooperation on both shores of the Mediterranean. 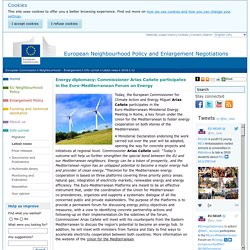 A Ministerial Declaration endorsing the work carried out over the year will be adopted, opening the way for concrete projects and initiatives at regional level. Commissioner Arias Cañete said: "Today's outcome will help us further strengthen the special bond between the EU and our Mediterranean neighbours. 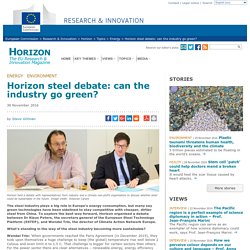 Wendel Trio: ‘When governments reached the Paris Agreement (in December 2015), they took upon themselves a huge challenge to keep (the global) temperature rise well below 2 Celsius and even limit it to 1.5 C. That challenge is bigger for certain sectors than others. Publication: Key World Energy Statistics 2016. Cash, Jobs And Better Health: How Renewables Can Give Tunisia’s Economy A Lift #climate #Tunisia2020. Looking Ahead with Advanced Biofuels. Today’s modern world is one defined by mobility. 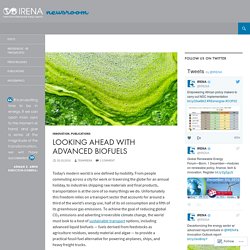 From people commuting across a city for work or traversing the globe for an annual holiday, to industries shipping raw materials and final products, transportation is at the core of so many things we do. Unfortunately this freedom relies on a transport sector that accounts for around a third of the world’s energy use, half of its oil consumption and a fifth of its greenhouse gas emissions.  Innovation Outlook: Advanced Liquid Biofuels. Countries - Eurogia. Compact of Mayors. Covenant of Mayors - Covenant of Mayors for Climate & Energy.

Heralded as the “world’s biggest urban climate and energy initiative” by Commissioner Miguel Arias Cañete, the Covenant of Mayors for Climate & Energy brings together thousands of local and regional authorities voluntarily committed to implementing EU climate and energy objectives on their territory. 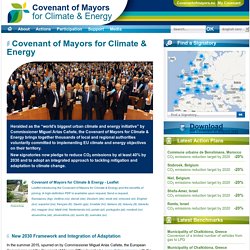 New signatories now pledge to reduce CO2 emissions by at least 40% by 2030 and to adopt an integrated approach to tackling mitigation and adaptation to climate change. Covenant of Mayors for Climate & Energy - LeafletLeaflet introducing the Covenant of Mayors for Climate & Energy and the benefits of joining. A high-definition PDF is available upon request. New 2030 Framework and Integration of Adaptation. The Agency. Page Content The Agency for the Cooperation of Energy Regulators (ACER), a European Union Agency, was created by the Third Energy Package to further progress the completion of the internal energy market both for electricity and natural gas. 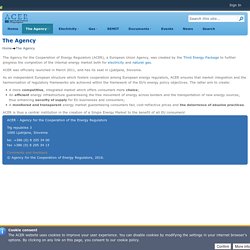 ACER was officially launched in March 2011, and has its seat in Ljubljana, Slovenia. As an independent European structure which fosters cooperation among European energy regulators, ACER ensures that market integration and the harmonisation of regulatory frameworks are achieved within the framework of the EU’s energy policy objectives. The International Energy Efficiency Scorecard. The 2012 International Energy Efficiency Scorecard ranks 12 of the world's largest economies, representing over 78 percent of global gross domestic product, 63 percent of global energy consumption, and 62 percent of the global carbon-dioxide-equivalent emissions. 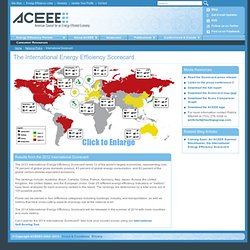 The rankings include: Australia, Brazil, Canada, China, France, Germany, Italy, Japan, Russia, the United Kingdom, the United States, and the European Union. Over 25 different energy efficiency indicators or "metrics" have been analyzed for each economy ranked in the report. The rankings are determined by a total score out of 100 possible points. Points can be earned in four difference categories including buildings, industry, and transportation, as well as metrics that track cross-cutting aspects of energy use at the national level.

Spanish EUREKA Chair. Spain is a EUREKA founding member country taking over the network’s chairmanship for the third time. 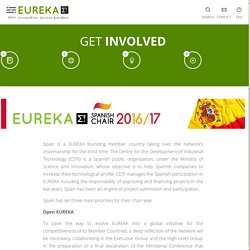 The Centre for the Development of Industrial Technology (CDTI) is a Spanish public organisation, under the Ministry of Science and Innovation, whose objective is to help Spanish companies to increase their technological profile. CDTI manages the Spanish participation in EUREKA including the responsibility of approving and financing projects.In the last years, Spain has been an engine of project submission and participation.

WorldEnergyOutlook2016ExecutiveSummaryEnglish. A delicate balance between water demand and the low-carbon energy transition. 15 November 2016 Biofuels production, concentrating solar power, carbon capture and storage and nuclear power can have significant water demands (Photograph © Graphic Obsession) Energy and water have always been closely intertwined. About us. The Directorate-General for Energy is one of 33 policy-specific departments in the European Commission. It focuses on developing and implementing the EU's energy policy – secure, sustainable, and competitive energy for Europe. DG Energy is organised into five Directorates consisting of 17 individual units.

Organisational chartSearch for available translations of the preceding link••• Mission statement The Directorate-General for Energy is responsible for developing and implementing a European energy policy under the political guidance of the European Commission Vice-President for Energy Union Maroš Šefčovič and Climate Action and Energy Commissioner Miguel Arias Cañete. Ten Tough Interview Questions and Ten Great Answers - CollegeGrad.com. The best way to prepare yourself for the interview is to know what questions may be coming and practice in advance.

The following are some of the most difficult questions you will face in the course of your job interviews. Some questions may seem rather simple on the surface—such as "Tell me about yourself"—but these questions can have a variety of answers. Climate Change - United Nations Sustainable Development.

Share this story, choose your platform! Climate change is now affecting every country on every continent. It is disrupting national economies and affecting lives, costing people, communities and countries dearly today and even more tomorrow. People are experiencing the significant impacts of climate change, which include changing weather patterns, rising sea level, and more extreme weather events. The greenhouse gas emissions from human activities are driving climate change and continue to rise.