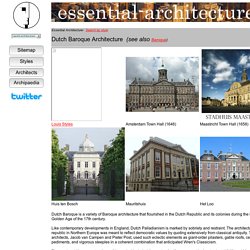 Like contemporary developments in England, Dutch Palladianism is marked by sobriety and restraint. The architecture of the first republic in Northern Europe was meant to reflect democratic values by quoting extensively from classical antiquity. Two leading architects, Jacob van Campen and Pieter Post, used such eclectic elements as giant-order pilasters, gable roofs, central pediments, and vigorous steeples in a coherent combination that anticipated Wren's Classicism. The most ambitious constructions of the period included the seats of self-government in Amsterdam (1646) and Maastricht (1658), designed by Campen and Post, respectively. On the other hand, the residences of the House of Orange are closer to a typical burgher mansion than to a royal palace.