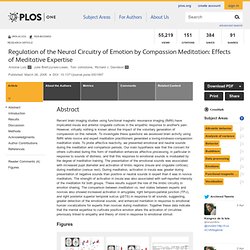 However, virtually nothing is known about the impact of the voluntary generation of compassion on this network. To investigate these questions we assessed brain activity using fMRI while novice and expert meditation practitioners generated a loving-kindness-compassion meditation state. To probe affective reactivity, we presented emotional and neutral sounds during the meditation and comparison periods. Our main hypothesis was that the concern for others cultivated during this form of meditation enhances affective processing, in particular in response to sounds of distress, and that this response to emotional sounds is modulated by the degree of meditation training.

Figures. On what key points do the discoveries of neuroscience and Buddhist philosophy intersect. BuddhasBrainArticle. 10 Take-Aways from Workshop on Neuroscience, Meditation & Health. The other day, I had the pleasure of being able to attend a "Wise Heart and the Mindful Brain" workshop given by Jack Kornfield, a world renowned expert in Buddhist Psychology, and Dan Siegel, an authority on interpersonal neurobiology. 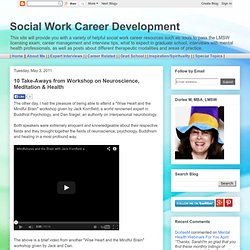 Both speakers were extremely eloquent and knowledgeable about their respective fields and they brought together the fields of neuroscience, psychology, Buddhism and healing in a most profound way. The above is a brief video from another "Wise Heart and the Mindful Brain" workshop given by Jack and Dan. I will share with you what I think were the key take-aways from the workshop that Jack and Dan presented. Dan referred to three of his books during the workshop: Learnings from Neuroscience: Gems from Buddhist Psychology: Aside from learning so much during the two day workshop, we also went through several meditations or practices.

Meditation on forgivenessMeditation on compassionMeditation on lovingkindness My partner had a very different experience. Dialogues. Photo: Manuel Bauer The Mind and Life Dialogues began in 1987 as a joint quest between scientists, philosophers and contemplatives to investigate the mind, develop a more complete understanding of the nature of reality, and promote well-being on the planet. 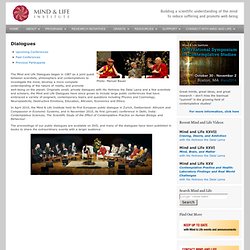 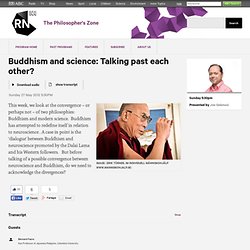 Buddhism has attempted lately to redefine itself in relation to neuroscience. A case in point is the dialogue between Buddhism and neuroscience promoted by the Dalai Lama and his western followers. To look at how this dialogue has been conducted, I’m joined by Professor Bernard Faure, who holds the Kao chair in Japanese religion at Columbia University, where he’s also Director of the Columbia Center for Japanese Religion. Bernard Faure, welcome to The Philosopher’s Zone. Bernard Faure: Thank you for having me. Buddhism and the Brain. Credit: Flickr user eschipul Over the last few decades many Buddhists and quite a few neuroscientists have examined Buddhism and neuroscience, with both groups reporting overlap. 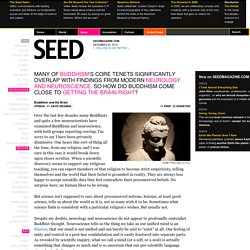 I’m sorry to say I have been privately dismissive. One hears this sort of thing all the time, from any religion, and I was sure in this case it would break down upon closer scrutiny. When a scientific discovery seems to support any religious teaching, you can expect members of that religion to become strict empiricists, telling themselves and the world that their belief is grounded in reality. They are always less happy to accept scientific data they feel contradicts their preconceived beliefs. But science isn’t supposed to care about preconceived notions. Despite my doubts, neurology and neuroscience do not appear to profoundly contradict Buddhist thought. Buddhists say pretty much the same thing. Mr. Although I despaired, I comforted myself by looking at the overlying cortex. The next day Mr. This is Your Brain on Buddha, by Erik Davis. Anyone studying the mind will soon stumble across a fundamental tension between first-person and third-person accounts of cognition. 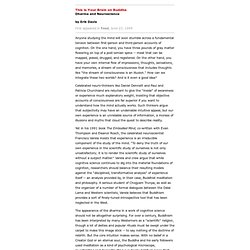 On the one hand, you have three pounds of gray matter flowering on top of a post-simian spine -- meat that can be mapped, poked, drugged, and registered. On the other hand, you have your own internal flow of impressions, thoughts, sensations, and memories, a stream of consciousness that includes thoughts like "the stream of consciousness is an illusion. " How can we integrate these two worlds? And is it even a good idea? Celebrated neuro-thinkers like Daniel Dennett and Paul and Patricia Churchland are reluctant to give the "inside" of awareness or experience much explanatory weight, insisting that objective accounts of consciousness are far superior if you want to understand how the mind actually works.

The appearance of the dharma in a work of cognitive science should not be altogether surprising. Other long-time dharmaheads have a different take. Buddhism and Buddhist schools. Buddhism Vs. Neuroscience. Long before my interest in Buddhism, I was fascinated by how our brains work, how thoughts arise, how consciousness works, and where this feeling of self comes from. 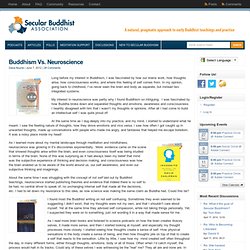 In my opinion, going back to childhood, I’ve never seen the brain and body as separate, but instead two integrated systems. My interest in neuroscience was partly why I found Buddhism so intriguing. I was fascinated by how Buddha broke down and separated thoughts and emotions, awareness and consciousness. I heartily disagreed with him that I wasn’t my thoughts or opinions. After all I had come to build an intellectual self I was quite proud of! At the same time as I dug deeply into my practice, and my mind, I started to understand what he meant. As I learned more about my mental landscape through meditation and mindfulness, neuroscience was growing in it’s discoveries exponentially. I found most the Buddhist writing on not self confusing.

Not all scientists agree that there isn’t a self.