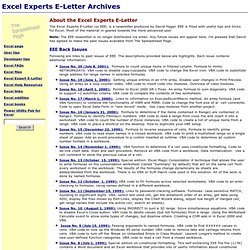 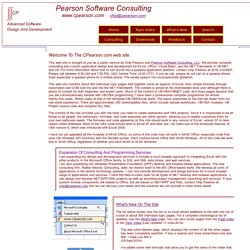 We provide complete consulting and custom application design and development for Excel, Office, Visual Basic, and the NET Framework in VB.NET and C#. For more information about how to turn Excel into a powerful application platform, contact Chip Pearson at (816) 214-6957. Please call between 9:00 AM and 7:00 PM, USA Central Time (-6:00 UTC). If you do call, please do not call on a speaker phone, most especially a speaker phone on a mobile phone. 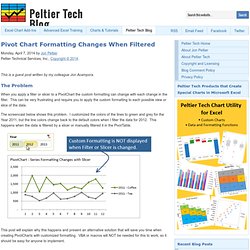 I know everyone in this neighborhood, but I’ve never seen your face before. Can you account for yourself? Freddy: Yes, I am Dr. Frederick Fronkonsteen, newly arrived from America. Jon's Excel Charts and Tutorials - Index. Microsoft Office Development. Excel Charts Blog. Sparklines for Excel® SparkLines. Download source code - 4.41 KB Introduction Spark lines is this really cool way to visualize information. They are small high resolution line charts that show you where things are heading. Note that they don't show any detailed data, but only the general trend.

This article explains how to create and use spark lines in your ASP.NET application. Using the code An ASP.NET page (sparkline.aspx) is producing the binary output to generate the image. The table below shows the list of parameters that the image page (sparkline.aspx) can accept. Eugene's Blog: How To...Draw a Polar Diagram in Excel. I have added a new video to YouTube as part of my "How To... 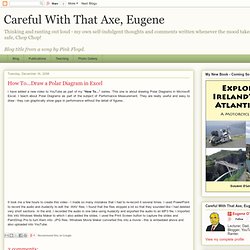 " series. This one is about drawing Polar Diagrams in Microsoft Excel. I teach about Polar Diagrams as part of the subject of Performance Measurement. They are really useful and easy to draw - they can graphically show gaps in performance without the detail of figures. It took me a few hours to create this video - I made so many mistakes that I had to re-record it several times. I used PowerPoint to record the audio and Audacity to edit the .WAV files. How to Make a Donut-Pie Combination Chart. We’ve been dissing pie charts and donut charts quite a bit. 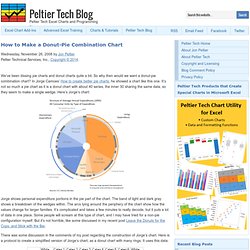 So why then would we want a donut-pie combination chart? In Jorge Camoes’ How to create better pie charts, he showed a chart like this one. It’s not so much a pie chart as it is a donut chart with about 40 series, the inner 30 sharing the same data, so they seem to make a single wedge. Here’s Jorge’s chart: Jorge shows personal expenditure portions in the pie part of the chart. There was some discussion in the comments of my post regarding the construction of Jorge’s chart. Why are there so many series named “core” with the identical data? Below left is a donut chart created with this data.

That left hand image looks like a dendrochronograph. Here’s how to make a similar chart with donut and pie series in the same chart. At first glance we seem to be stuck, but never fear, the chart doctor is here (the “voodoo” doctor, that is). Explode the pie. Below left, the pie segments have been moved to the center one wedge at a time. Multi-level Pie Charts. By: Jeff Clark Date: Thu, 27 Jul 2006 I promised a few months ago to describe something I call a Multi-level Pie Chart or Radial Treemap. 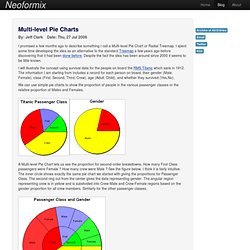 I spent some time developing the idea as an alternative to the standard Treemap a few years ago before discovering that it had been done before. Despite the fact the idea has been around since 2000 it seems to be little known. I will illustrate the concept using survival data for the people on board the RMS Titanic which sank in 1912. The information I am starting from includes a record for each person on board, their gender (Male, Female), class (First, Second, Third, Crew), age (Adult, Child), and whether they survived (Yes,No). We can use simple pie charts to show the proportion of people in the various passenger classes or the relative proportion of Males and Females. Computers: Software: Spreadsheets: Excel. Excel Help Forum. The Spreadsheet Page - By John Walkenbach. Excel Digest. 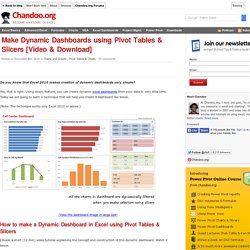 Yes, that is right. Using slicers feature, you can create dynamic excel dashboards from your data in very little time.