The Road to Happiness. Mysterious Notes. Please do NOT copy/distribute my works without permission. 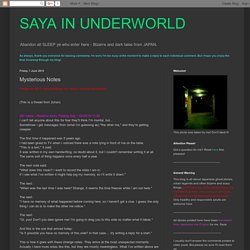 A Ghost Waving A Hand (updated) The White Death. The White Death is a creepy story about a vengeful spirit in Mexico who hunts down anyone who knows about her existence. 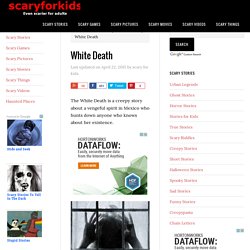 I am currently sitting in front of my computer, scared witless. Every moment could be my last. My friend is here with me and he is the sole reason why my life is in danger. It may not make sense at first, but let me explain. It all started earlier today, when a friend of mine burst into my house and slammed the door behind him. He had been living with his Aunt for the past year because his parents were in Mexico. They brought him over to a chair and let him sit down. Confused, they asked him who or what a Muerto Blanco was. She is a girl, but not a girl, he said. “She knocks once for you skin, which she’ll use to patch her own decaying flesh.

“No matter where you go, The White Death will track you down and you will hear her terrible knocking begin on the door. The terrified man was certain that this thing had killed his sister. Hachishakusama. Eight Feet Tall or “Hachishakusama” is a Japanese urban legend about a tall woman who abducts children. 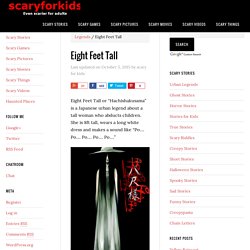 She is 8ft tall, wears a long white dress and makes a sound like “Po… Po… Po… Po… Po…” My grandparents lived in Japan. Every Summer, my parents would take me there on holiday to visit them. Razor Games. The estimated reading time for this post is 36 minutes, 58 seconds Add this post to your list of favorites! 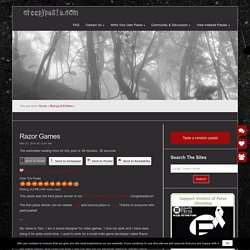 Rating: 9.2/10 (346 votes cast) This pasta was the third place winner of our Gaming Creepypasta Challenge. Brother's Treasure - Creepypasta Wiki - Wikia. Preface If you were to loose that most important person, what would you do to get them back? 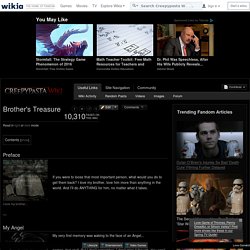 Square Papers - Creepypasta Wiki - Wikia. All this shit started when I found that little note. 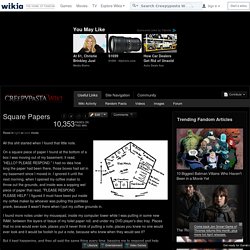 On a square piece of paper I found at the bottom of a box I was moving out of my basement, it read, "HELLO? PLEASE RESPOND. " One-Way Experiment - Creepypasta Wiki - Wikia. Author's note: Before we begin, I would like to clarify that the information I am about to release can be debated to be real OR fake. 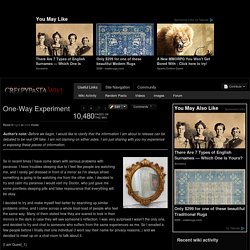 I am not claiming on either sides, I am just sharing with you my experience in exposing these pieces of information. So in recent times I have come down with serious problems with paranoia. I have troubles sleeping due to I feel like people are watching me, and I rarely get dressed in front of a mirror as I'm always afraid something is going to be watching me from the other side. I decided to try and calm my paranoia I would visit my Doctor, who just gave me some pointless sleeping pills and false reassurance that everything will be okay. I decided to try and make myself feel better by searching up similar problems online, and I came across a whole boat-load of people who feel the same way. 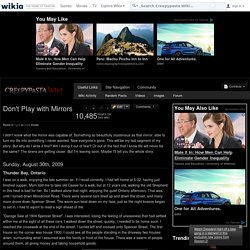 Something so beautifully mysterious as that mirror, able to turn my life into something I never wanted. Now everyone's gone. This will be my last segment of my story. But why do I write it first? Am I doing it out of fear? Sunday, August 30th, 2009 Thunder Bay, Ontario I was on a walk, enjoying the late summer air. "Garage Sale at 1904 Spencer Street". I walked closer, and came to a table with stuff on it. The Demon in the Mirror Trick - Creepypasta Wiki - Wikia. This is an old trick, one I am sure many of you have tried. 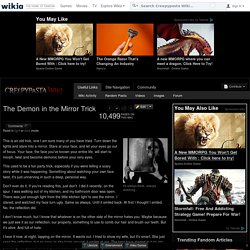 Turn down the lights and stare into a mirror. Stare at your face, and let your eyes go out of focus. Your face, the face you've known your entire life, will start to morph, twist and become demonic before your very eyes. This used to be a fun party trick, especially if you were telling a scary story while it was happening. Channel 71 - Creepypasta Wiki - Wikia. “I didn't want to say too much over the phone because I didn't want to jinx this,” Karen said, pulling into the driveway of a small mid-century bungalow. 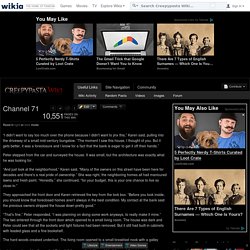 “The moment I saw this house, I thought of you. But it gets better, it was a foreclosure and I know for a fact that the bank is eager to get it off their hands.” Peter stepped from the car and surveyed the house. The Amnesia Tapes - Creepypasta Wiki - Wikia. My parents always tell me the stories about my childhood that, for some odd reason, I cannot recall. Stories about how I used to have a imaginary friend named Bilbo who supposedly, according to my childhood self, lived in the walls with his pet snake Axel.

Be Careful What You Wish For. The estimated reading time for this post is 8 minutes, 19 seconds Add this post to your list of favorites! Rating: 7.2/10 (407 votes cast) The night was painted like a scene in a bad horror movie, the wind howling through the cracks in the windows sounding like the screaming of a tortured woman. The house vibrated with each crack of thunder and the lightening lit up the house as if it were broad daylight . Jacob, Alex and Kaya pretended to be brave and manly, hoping to impress the girls they invited over while Kaya’s parents were out of town. Sydney was the hottest girl in the entire high school and Kaya really wanted to ask her out.

The worst ice storm Detroit had seen in a century had done its work well, transforming the entirety of the park into frozen sculptures. He eyed the forest, standing on the other side of the worn stone bridge, hands buried in his pockets. He had an idea who the blood on the bridge belonged to.