Unit type. The unit type is the terminal object in the category of types and typed functions. 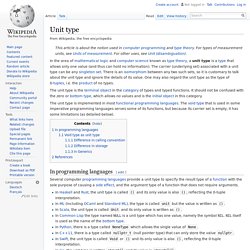 It should not be confused with the zero or bottom type, which allows no values and is the initial object in this category. The unit type is implemented in most functional programming languages. The void type that is used in some imperative programming languages serves some of its functions, but because its carrier set is empty, it has some limitations (as detailed below). Top type. The top type in the type theory of mathematics, logic, and computer science, commonly abbreviated as top or by the down tack symbol (⊤), is the universal type, sometimes called the universal supertype as all other types in any given type system are subtypes of top. 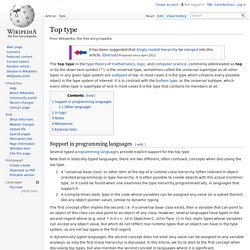 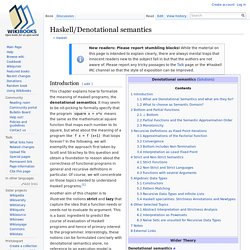 It may seem to be nit-picking to formally specify that the program square x = x*x means the same as the mathematical square function that maps each number to its square, but what about the meaning of a program like f x = f (x+1) that loops forever? In the following, we will exemplify the approach first taken by Scott and Strachey to this question and obtain a foundation to reason about the correctness of functional programs in general and recursive definitions in particular.

Of course, we will concentrate on those topics needed to understand Haskell programs.[1] Another aim of this chapter is to illustrate the notions strict and lazy that capture the idea that a function needs or needs not to evaluate its argument. What are Denotational Semantics and what are they for? Bottom type. In type theory, a theory within mathematical logic, the bottom type is the type that has no values. 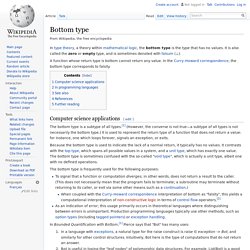 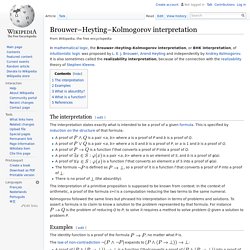 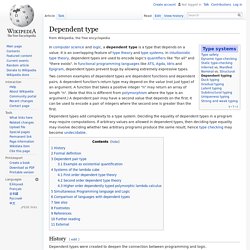 Deciding the equality of dependent types in a program may require computations. If arbitrary values are allowed in dependent types, then deciding type equality may involve deciding whether two arbitrary programs produce the same result; hence type checking may become undecidable. History[edit] Dependent types were created to deepen the connection between programming and logic. In 1934, Haskell Curry noticed that the types used in mathematical programming languages followed the same pattern as axioms in propositional logic. Predicate logic is an extension of propositional logic, adding quantifiers. Type theory. In mathematics, logic, and computer science, a type theory is any of a class of formal systems, some of which can serve as alternatives to set theory as a foundation for all mathematics. 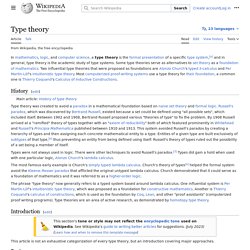 In type theory, every "term" has a "type" and operations are restricted to terms of a certain type. Two well-known type theories that can serve as mathematical foundations are Alonzo Church's typed λ-calculus and Per Martin-Löf's intuitionistic type theory. Type class. In computer science, a type class is a type system construct that supports ad hoc polymorphism. 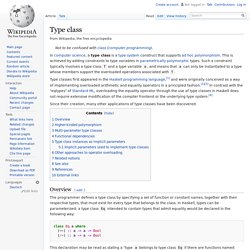 This is achieved by adding constraints to type variables in parametrically polymorphic types. Such a constraint typically involves a type class T and a type variable a, and means that a can only be instantiated to a type whose members support the overloaded operations associated with T. Since their creation, many other applications of type classes have been discovered. Overview[edit] The programmer defines a type class by specifying a set of function or constant names, together with their respective types, that must exist for every type that belongs to the class. Polymorphism (computer science) Ad hoc polymorphism: when a function denotes different and potentially heterogeneous implementations depending on a limited range of individually specified types and combinations. 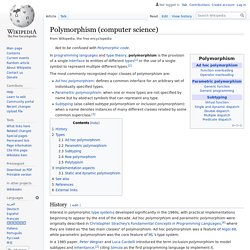 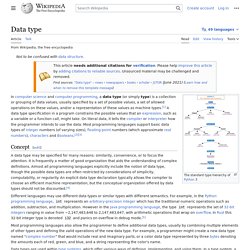 For their use in statistics, see statistical data type. In computer science and computer programming, a data type or simply type is a classification identifying one of various types of data, such as real, integer or Boolean, that determines the possible values for that type; the operations that can be done on values of that type; the meaning of the data; and the way values of that type can be stored.[1][2] Overview[edit] Data types are used within type systems, which offer various ways of defining, implementing and using them.

Type safety. Recursive data type. In computer programming languages, a recursive data type (also known as a recursively-defined, inductively-defined or inductive data type) is a data type for values that may contain other values of the same type. Data of recursive types are usually viewed as directed graphs. An important application of recursion in computer science is in defining dynamic data structures such as Lists and Trees. Recursive data structures can dynamically grow to a theoretically infinite size in response to runtime requirements; in contrast, a static array's size requirements must be set at compile time. Algebraic data type. The values of a sum type are typically grouped into several classes, called variants.

A value of a variant type is usually created with a quasi-functional entity called a constructor. Each variant has its own constructor, which takes a specified number of arguments with specified types. The set of all possible values of a sum type is the set-theoretical sum, i.e. the disjoint union, of the sets of all possible values of its variants.

Type constructor. In the area of mathematical logic and computer science known as type theory, a type constructor is a feature of a typed formal language that builds new types from old. Typical type constructors encountered are product types, function types, power types and list types. Simply typed lambda calculus. The simply typed lambda calculus ( Typed lambda calculus. ) to denote anonymous function abstraction. Curry–Howard correspondence. A proof written as a functional program: the proof of commutativity of addition on natural numbers in the proof assistant Coq. nat_ind stands for mathematical induction, eq_ind for substitution of equals and f_equal for taking the same function on both sides of the equality. Earlier theorems are referenced showing m = m + 0 and S (m + y) = m + S y.