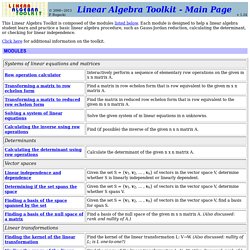 Each module is designed to help a linear algebra student learn and practice a basic linear algebra procedure, such as Gauss-Jordan reduction, calculating the determinant, or checking for linear independence. Click here for additional information on the toolkit. The Linear Algebra Toolkit has been written entirely in PERL. Every effort has been made to make it compatible with a broad range of browsers, however, no guarantee can be made that every browser will properly handle this application.In order to bookmark the toolkit, first go to the cover page; all the other pages in this toolkit (including the one you are reading) are created dynamically.The toolkit represents all the data (such as matrix entries, vector components and polynomial coefficients) as rational numbers, where both the numerator and denominator are stored as integers. 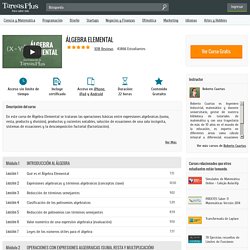 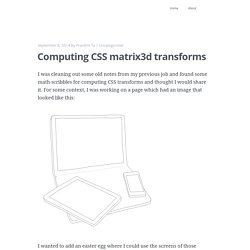 For some context, I was working on a page which had an image that looked like this: I wanted to add an easter egg where I could use the screens of those devices to display arbitrary things. I thought it would just be a simple matter of pixel pushing with translate/rotate/scale/etc using CSS transforms but couldn’t really get things to line up perfectly. Frustrated, I started trying to solve it analytically instead.

That means for any given shape, I need to solve for the perspective transform that warps an element into that shape. See the coffeescript tab for the code. Using that you can drag things into whatever (convex quadrilateral) shape you want: Blah blah blah blah blah I ended up not using this for anything but hope someone else will find it useful! Thus the transformation matrix H that we want to solve for must satisfy. Visualizing Algorithms. The power of the unaided mind is highly overrated… The real powers come from devising external aids that enhance cognitive abilities. 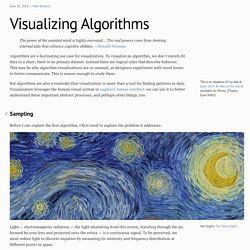 —Donald Norman Algorithms are a fascinating use case for visualization. To visualize an algorithm, we don’t merely fit data to a chart; there is no primary dataset. Instead there are logical rules that describe behavior. This may be why algorithm visualizations are so unusual, as designers experiment with novel forms to better communicate. But algorithms are also a reminder that visualization is more than a tool for finding patterns in data. #Sampling Before I can explain the first algorithm, I first need to explain the problem it addresses. Light — electromagnetic radiation — the light emanating from this screen, traveling through the air, focused by your lens and projected onto the retina — is a continuous signal. Code School - Try R. A Primer on Bézier Curves. In order to draw things in 2D, we usually rely on lines, which typically get classified into two categories: straight lines, and curves. 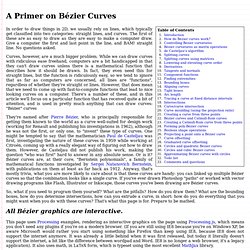 The first of these are as easy to draw as they are easy to make a computer draw. Give a computer the first and last point in the line, and BAM! Straight line. No questions asked. Curves, however, are a much bigger problem. They're named after Pierre Bézier, who is principally responsible for getting them known to the world as a curve well-suited for design work (working for Renault and publishing his investigations in 1962), although he was not the first, or only one, to "invent" these type of curves.

So, what if you need to program them yourself? All Bézier graphics are interactive. This page uses Processing examples, rendering as interactive graphics on the page using Processing.js, which means you don't need any plugins if you're on a modern browser. Examples have a "view source" option. Questions, comments: The Nature of Code. “Roger, Roger. What’s our vector, Victor?” — Captain Oveur (Airplane) This book is all about looking at the world around us and coming up with clever ways to simulate that world with code. Divided into three parts, the book will start by looking at basic physics—how an apple falls from a tree, a pendulum swings in the air, the earth revolves around the sun, etc.

Absolutely everything contained within the first five chapters of this book requires the use of the most basic building block for programming motion—the vector. Now, the word vector can mean a lot of different things. A vector is typically drawn as a arrow; the direction is indicated by where the arrow is pointing, and the magnitude by the length of the arrow itself.