ControlsFX. ControlsFX is an open source project for JavaFX that aims to provide really high quality UI controls and other tools to complement the core JavaFX distribution. 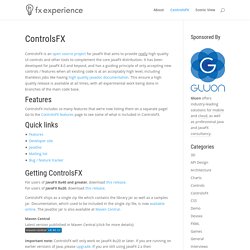 It has been developed for JavaFX 8.0 and beyond, and has a guiding principle of only accepting new controls / features when all existing code is at an acceptably high level, including thankless jobs like having high quality javadoc documentation. This ensure a high quality release is available at all times, with all experimental work being done in branches of the main code base. Features ControlsFX includes so many features that we’re now listing them on a separate page! Go to the ControlsFX features page to see some of what is included in ControlsFX.

Quick links Getting ControlsFX For users of JavaFX 8u40 and greater, download this release. ControlsFX ships as a single zip file which contains the library jar as well as a samples jar. Maven Central Latest version published in Maven Central (click for more details): Release Versioning. Ribbon for java using javafx – Pixel Duke.

CaptainCasa - Rich Internet Application Framework for demanding Applications. The GroovyFX Guide. In JavaFX, you display graphics and controls on the screen by constructing a scene graph that consists of various types of nodes - perhaps a circle or a button control. 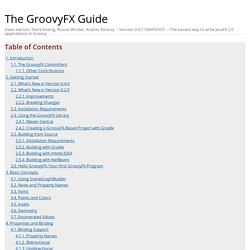 The scene graph is put into a Scene, which defines the area in which your scene graph will be displayed. The Scene can then be shown on a Stage. You can think of a Stage as the application container. If your applicaiton is running on the user’s desktop, the Stage corresponds to a desktop window that typically has a title bar and resizing controls. If your application is embedded into a browser, then the Stage corresponds to the applet’s display area.

This arrangement of Stage → Scene → Scene Graph is a hierarchy of nodes that can be described nicely using a declarative format: Except for one other minor detail which we’ll cover in the next section, this is a complete GroovyFX program that, when run, will produce the output below. Aim's Blog. JavaFX News, Demos and Insight // FX Experience. Jonathan Giles. I’ve spent the last two weeks crammed inside a steel tube doing a full trip around the world bringing JavaFX joy to developers everywhere Because of this, I missed out on posting the links for the last few weeks, and equally bad, I became so busy during that time I couldn’t keep track of things that happened. 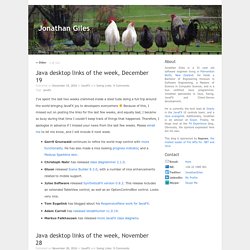 Therefore, I apologise in advance if I missed your news from the last few weeks. Please email me to let me know, and I will include it next week. Gerrit Grunwald continues to refine his world map control with more functionality. He has also made a nice looking progress indicator, and a Medusa Sparkline skin.Christoph Nahr has released class diagrammer 2.1.0.Gluon released Scene Builder 8.3.0, with a number of nice enhancements related to mobile support.Jyloo Software released SyntheticaFX version 0.8.2.

A few nice links this week – enjoy! Lots of good links – enjoy! GVM on Windows – Pawel Oczadly. What is GVM GVM allows you to manage different versions of Gradle. 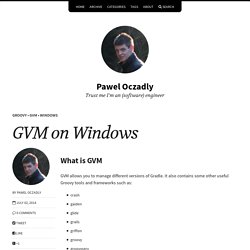 It also contains some other useful Groovy tools and frameworks such as: crash gaiden glide grails griffon groovy groovyserv lazybones springboot vertx More info: Installation Check your PowerShell version $PSVersionTable.PSVersion If the version is less than 3 update PowerShell by installing this update Check your PowerShell modules path If the modules directory does not exist, create it (C:\Users\paweloczadly\Documents\WindowsPowerShell\Modules) Clone the posh-gvm repository to the modules directory: git clone Import posh-gvm module Verification. 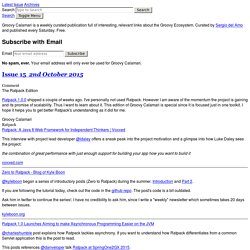 I've personally not used Ratpack. However I am aware of the momentum the project is gaining and its promise of scalability. Thus I want to learn about it. Groovy Calamari Ratpack Ratpack: A Java 8 Web Framework for Independent Thinkers | Voxxed This interview with project lead developer @ldaley offers a sneak peak into the project motivation and a glimpse into how Luke Daley sees the project: the combination of great performance with just enough support for building your app how you want to build it voxxed.com Zero to Ratpack - Blog of Kyle Boon @kyleboon began a series of introductory posts (Zero to Ratpack) during the summer.

If you are following the tutorial today, check out the code in the github repo. Mrhaki.com - Groovy, Grails and Java Developer. Grails Best Practices. I work at IntelliGrape, a company which specializes in Groovy & Grails development. 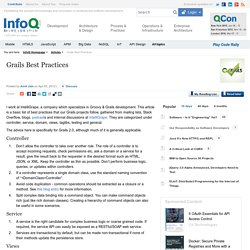 This article is a basic list of best practices that our Grails projects follow, gathered from mailing lists, Stack Overflow, blogs, podcasts and internal discussions at IntelliGrape. They are categorized under controller, service, domain, views, taglibs, testing and general. The advice here is specifically for Grails 2.0, although much of it is generally applicable. Controller Don’t allow the controller to take over another role.