What scared Napoleon in the pyramid?

The Mystic Traveller: Napoleon & The Mystery Within The Pyramid. In 1798, Napoleon Bonaparte embarked on a military expedition of Egypt. 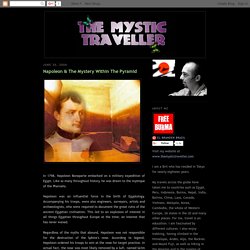 Like so many throughout history, he was drawn to the mystique of the Pharoahs. Napoleon was an influential force in the birth of Egyptology. Accompanying his troops, were also engineers, surveyors, artists and archaeologists, who were required to document the great ruins of the ancient Egyptian civilisation. This led to an explosion of interest in all things Egyptian throughout Europe at the time; an interest that has never waned. Inside the Great Pyramid. By Paul Horn From Inside Paul Horn, Paul Horn HarperSanFrancisco, 1990 -Chapter 14 As head of Epic’s A &: R department, David Kapralik saw the potential of Inside the Taj Mahal when nobody else did and released it. 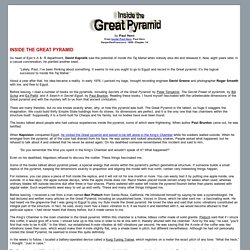 Now, eight years later, in a casual conversation, he planted another seed. “Lately, Paul, I’ve been thinking about something. About a year after that, his idea became a reality. Before leaving, I read a number of books on the pyramids, including Secrets of the Great Pyramid, by Peter Tompkins; The Secret Power of pyramids, by Bill Schul and Ed Pettit; and A Search in Secret Egypt, by Paul Brunton. There are many theories, but no one knows exactly when, why, or how this pyramid was built. The books talked about people who had various experiences inside the pyramid, some of which were frightening. Napoleon and the Great Pyramid: Myth and Reality - Beachcombing's Bizarre History Blog.

Author: Beach Combing | in : Ancient, Modern , trackback One of the best WIBT (wish I’d been there) moments in history must have been that wonderful occasion when Napoleon ascended to the royal chamber in the Great Pyramid and asked to spend a minute alone with the pharoahs: perhaps it is so fantastically attractive as history because no one was there and so there is the mystery of just what happened. 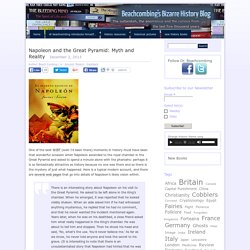 Here is a typical modern account, and there are several web pages that go into details of Napoleon’s likely vision within. There is an interesting story about Napoleon on his visit to the Great Pyramid. He asked to be left alone in the King’s chamber. When he emerged, it was reported that he looked visibly shaken. Now, Beach wrote above that no one was there with the Emperor, but actually, and this is rather embarassing, the Emperor wasn’t there either. On the 14th of July Bonaparte left Cairo for the Pyramids. And who is this author? Worth thinking what lying dogs we humans are. Buon. Napoleon Bonaparte's mystical experience inside the Great Pyramid of Giza.

Did you know that Napoleon Bonaparte had a mystical experience inside the Great Pyramid of Giza? 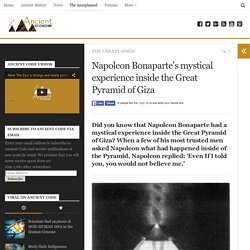 When a few of his most trusted men asked Napoleon what had happened inside of the Pyramid, Napoleon replied: ‘Even If I told you, you would not believe me.’ It is said that one night of August in 1799 changed the course of world history as Napoleon Bonaparte was inside the Great Pyramid of Giza, experiencing a secret that would forever alter Napoleon’s destiny. If we look back into history, we will find out that on summer of 1798, more than thirty thousand French soldiers came to Egypt under the command of General Bonaparte.

Napoleon. PYRAMID HISTORY - PART 1 Napoleon visits the King's ChamberIt is assumed by Egyptologists that the Great Pyramid of Giza was built in the reign of the pharaoh Khufu (known as Cheops to the Greeks), in the fourth Egyptian dynasty around 2600 BC. 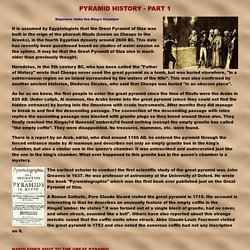 This date has recently been questioned based on studies of water erosion on the sphinx. It may be that the Great Pyramid of Giza also is much older than previously thought. Exploring Napoleon’s Nightmare Vision inside Cheop’s Pyramid. A friend, who visited Napoleon in his final days, asked him to tell him the secret of that day. 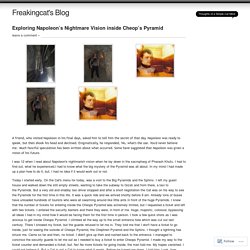 Napoleon was ready to speak, but then shook his head and declined. Enigmatically, he responded, 'No, what's the use. You'd never believe me.' Much fanciful speculation has been written about what occurred. Some have suggested that Napoleon was given a vision of his future. I was 12 when I read about Napoleon's nightmarish vision when he lay down in the sacropharg of Pharaoh Khufu. Today I started early. I jumped over the security barriers and made my way back to the Big Pyramid with a speed that even the Camels held their breath when they saw me rushing by. On the way in which is a long narrow walkway, I met a few tourists on their way out. Napoleon Bonaparte's Nightmare Vision Inside The Great Pyramid. MessageToEagle.com – What horrifying images did Napoleon Bonaparte see when he visited the Great Pyramid in Egypt? 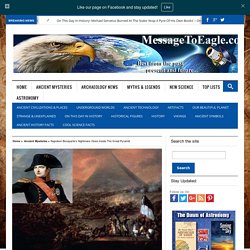 Was Napoleon given a vision of the future? Napoleon’s strange encounter inside the King’s Chamber is still shrouded in mystery. In 1798, Napoleon embarked on a military and archaeological expedition of Egypt. Like so many other people at the time, Napoleon was fascinated with Pharaohs and he took with him several engineers, surveyors, astronomers and archaeologists in order to learn more about the mysteries of ancient Egypt.

Napoleon’s scientists surveyed, measured, explored and made drawings of the Great Pyramid. This brings us to the most interesting part of Napoleon’s visit to Egypt. Napoleon had a need to explore the inner sanctorum of the pyramid and he asked to be left alone in the King’s Chamber where he stayed for some time. When he returned, it was reported that he looked visibly shaken. All he said was that he never wanted the incident to be mentioned again.