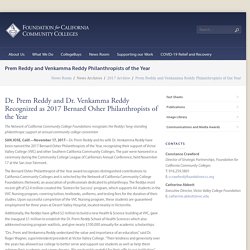 —November 17, 2017—Dr. Prem Reddy and his wife Dr. Venkamma Reddy have been named the 2017 Bernard Osher Philanthropists of the Year, recognizing their support of Victor Valley College (VVC) and other Southern California Community Colleges. The pair were honored in a ceremony during the Community College League of California’s Annual Conference, held November 17 at the San Jose Fairmont. The Bernard Osher Philanthropist of the Year award recognizes distinguished contributions to California Community Colleges and is selected by the Network of California Community College Foundations (Network), an association of professionals dedicated to philanthropy. Additionally, the Reddys have gifted $2 million to build a new Health & Science building at VVC, gave the inaugural $1 million to establish the Dr. Prime's chairman, Prem Reddy a Political Donor. This story originally ran in The Record on Aug. 25, 2014. 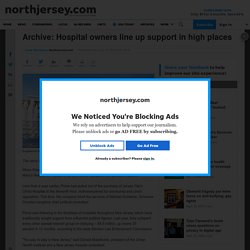 When Prime Healthcare Services, the California hospital chain, bid on St. Mary's Hospital in Passaic in 2012, it came equipped with political firepower. Less than a year earlier, Prime had pulled out of the purchase of Jersey City's Christ Hospital at the eleventh hour, outmaneuvered by community and union opposition. This time, the company hired the services of Michael DuHaime, Governor Christie's longtime chief political consultant. Prime was following in the footsteps of hospitals throughout New Jersey, which have traditionally sought support from influential political figures. "You pay to play in New Jersey," said Donald Malafronte, president of the Urban Health Institute and a New Jersey hospital consultant. Prem Reddy, MD, FACC, FCCP, is a physician, entrepreneur, and philanthropist. 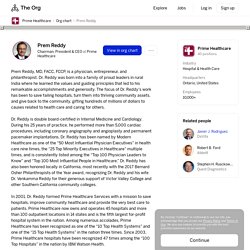 Dr. Reddy was born into a family of proud leaders in rural India where he learned the values and guiding principles that led to his remarkable accomplishments and generosity. The focus of Dr. Reddy's work has been to save failing hospitals, turn them into thriving community assets, and give back to the community, gifting hundreds of millions of dollars to causes related to health care and caring for others. CSUSB High Desert Students Receive Dr. Prem Reddy Academic Excellence Scholarships. CSUSB High Desert Students Receive Dr. 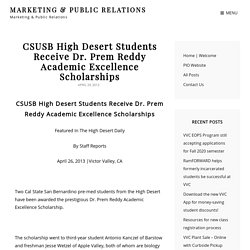 Prem Reddy Academic Excellence Scholarships Featured In The High Desert Daily By Staff Reports April 26, 2013 |Victor Valley, CA Two Cal State San Bernardino pre-med students from the High Desert have been awarded the prestigious Dr. The scholarship went to third-year student Antonio Kanczel of Barstow and freshman Jesse Wetzel of Apple Valley, both of whom are biology majors with a pre-med option and have made the Dean’s List. Kanczel, a junior with a 3.68 grade point average, plans on attending medical school with aspirations of becoming a surgeon with the ultimate goal of becoming head of surgery. “We’re grateful for Dr. “These students are our future, and it is imperative that we help foster their interest in medicine,” said Dr. Prem Reddy donates $500,000 to nursing program at UCUSB. Donation to go towards new laboratory, equipment at university. 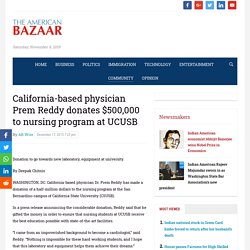 By Deepak Chitnis WASHINGTON, DC: California-based physician Dr. Prem Reddy has made a donation of a half-million dollars to the nursing program at the San Bernardino campus of California State University (CSUSB). In a press release announcing the considerable donation, Reddy said that he gifted the money in order to ensure that nursing students at UCUSB receive the best education possible with state-of-the-art facilities. “I came from an impoverished background to become a cardiologist,” said Reddy. The CSUSB’s nursing program averages about 400 undergraduate students, and offers both BS and MS degrees in nursing. Originally from a small village in Andhra Pradesh, Reddy was able to gain admission in Sri Venkateswara University Medical College, from which he graduated in 1973. Leaders of IEHP and CUSM, which was founded by Dr. Prem Reddy. Local Advertisement The Inland Empire Health Plan (IEHP), part of an expanding network of private-public collaborations in support of the mission of the California University of Science and Medicine (CUSM), has committed a $1.2 million annual donation to help eliminate medical school debt for medical students who pledge to serve needy communities in the region upon graduation. 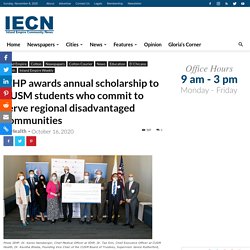 Leaders of IEHP and CUSM, which was founded by Dr. Prem Reddy and the Prime Healthcare Foundation, said the donation is an example of the type of philanthropy that can make an impact on the long-term health of communities while furthering the mission of the medical school: to inspire, motivate and empower students to become excellent and caring physicians, scientists, and leaders. Thirty-five percent of current CUSM medical students are from the Inland Empire, and 50 percent come from low socioeconomic backgrounds. Prem Reddy's dream come true to establish a Medical School. Alyssa Rege - Wednesday, February 21st, 2018 Print | Email. 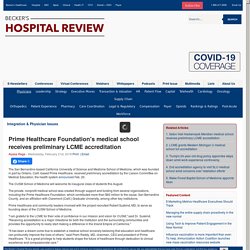 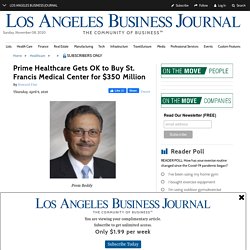 Bankruptcy Court approval to purchase St. Francis Medical Center in Lynwood from bankrupt Verity Health System of California Inc. for more than $350 million. Under terms of the deal, which was announced April 9, Prime Healthcare will purchase St. Francis for a base price of $200 million, plus $15 million in payroll and benefits for the hospital’s staff. As part of the “total net consideration” price of more than $350 million outlined in the agreement, Prime Healthcare has committed to investing $47 million in St. 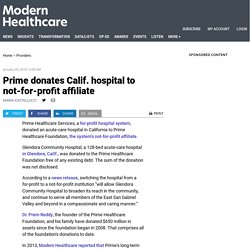 Glendora Community Hospital, a 128-bed acute-care hospital in Glendora, Calif., was donated to the Prime Healthcare Foundation free of any existing debt. The sum of the donation was not disclosed. According to a news release, switching the hospital from a for-profit to a not-for-profit institution “will allow Glendora Community Hospital to broaden its reach in the community, and continue to serve all members of the East San Gabriel Valley and beyond in a compassionate and caring manner.” Federation of American Hospitals Elects Dr Prem Reddy, as Chair-Elect for 2021 Board of Directors. Ontario, Calif., Oct. 24, 2019 (GLOBE NEWSWIRE) -- The Federation of American Hospitals (FAH) has named Prem Reddy, MD, Board of Directors Chair-Elect for 2021. 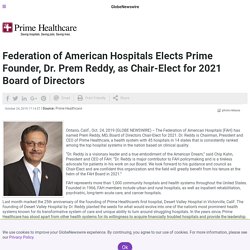 Dr. Reddy is Chairman, President and CEO of Prime Healthcare, a health system with 45 hospitals in 14 states that is consistently ranked among the top hospital systems in the nation based on clinical quality.