Ipad Apps for Learners with Dyslexia. Many iPad apps are available to support learners with reading and writing difficulties. 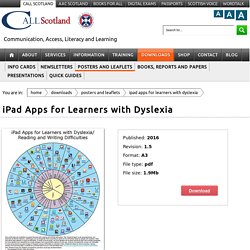 This 'Wheel of Apps' is not comprehensive, but attempts to identify relevant apps and to categorise them according to some of the difficulties faced by people with dyslexia. It was originally published as an A3 poster, but works equally well as an A4 leaflet. Links on the electronic version are 'clickable, taking you to information about the individual app on the iTunes site for the UK. iPad Apps for Learners with Dyslexia / Reading and Writing Difficulties was last updated in October 2016. The main change is the removal of the section on Visual Stress, as the introduction of 'Display Accommodations' in the iOS 10 Accessibility Settings makes the apps in this section redundant. DnA - Resources. Quizlet is a free learning and revision tool. 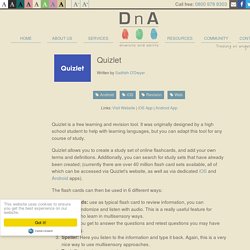 It was originally designed by a high school student to help with learning languages, but you can adapt this tool for any course of study. Quizlet allows you to create a study set of online flashcards, and add your own terms and definitions. Additionally, you can search for study sets that have already been created; (currently there are over 40 million flash card sets available, all of which can be accessed via Quizlet's website, as well as via dedicated iOS and Android apps). The flash cards can then be used in 6 different ways: Flashcards: use as typical flash card to review information, you can shuffle/randomize and listen with audio.

Quizlet is free, but you can pay to upgrade to Quizlet Plus for some extra features, (namely speech recording and customised images). Learning tools & flashcards, for free. Diversity and Ability. DnA - Resources. Dear Dyslexia. Free online courses for teachers. Updated September 2016 Coursera ‘MOOC’ A total exceeding 28,000 learners have enrolled in this course. 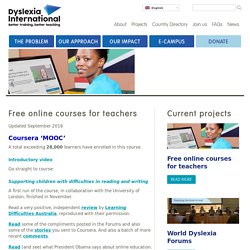 Introductory video Go straight to course: Supporting children with difficulties in reading and writing A first run of the course, in collaboration with the University of London, finished in November. Read a very positive, independent review by Learning Difficulties Australia, reproduced with their permission.

Read some of the compliments posted in the Forums and also some of the stories you sent to Coursera. Dyslexia International. (Checked September 2016) GraphoGame An evidence-based learning game that helps children learn the basic letters and their sounds. 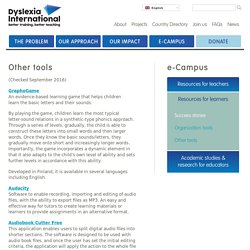 By playing the game, children learn the most typical letter-sound relations in a synthetic-type phonics approach. Through a series of levels, gradually, the child is able to construct these letters into small words and then larger words. Once they know the basic sounds/letters, they gradually move onto short and increasingly longer words. Importantly, the game incorporates a dynamic element in that it also adapts to the child’s own level of ability and sets further levels in accordance with this ability. Developed in Finland, it is available in several languages including English. Audacity Software to enable recording, importing and editing of audio files, with the ability to export files as MP3. Audiobook Cutter Free This application enables users to split digital audio files into shorter sections. Dyslexia International. ‘Many dyslexics have poor organization and time management skills. 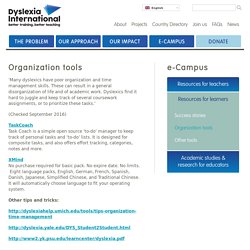 These can result in a general disorganization of life and of academic work. Dyslexics find it hard to juggle and keep track of several coursework assignments, or to prioritize these tasks.’ (Checked September 2016) TaskCoach Task Coach is a simple open source ‘to-do’ manager to keep track of personal tasks and ‘to-do’ lists. It is designed for composite tasks, and also offers effort tracking, categories, notes and more. Dyslexia International. British Dyslexia Association. 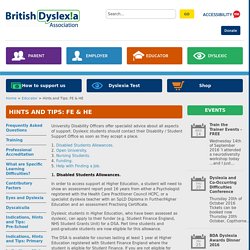 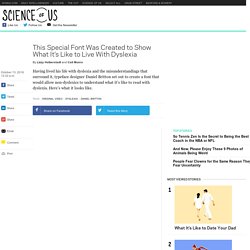 We will never post to your social media account without your permission. Films about dyslexia. My Dyslexic Mind - A Newsround Special - CBBC Newsround. About one in every 10 children has dyslexia. 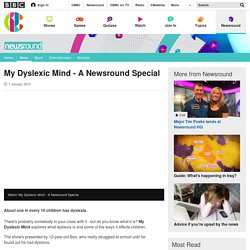 There's probably somebody in your class with it - but do you know what it is? My Dyslexic Mind explores what dyslexia is and some of the ways it affects children. The show's presented by 12-year-old Ben, who really struggled at school until he found out he had dyslexia. It's a learning disability, which means reading and writing are harder than for other kids. It also affects his memory. As part of the show Ben meets Dominic - one half of Dick and Dom. To find out more check out our guide to dyslexia and have a go at 'Try Being Me', an interactive experience, which aims to put you in the shoes of the children featured in the latest Newsround special. If you think you might have dyslexia, you should tell a parent, guardian or teacher. Dyslexia. 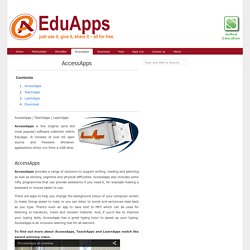 Learn Hacks #24 Readability. Five apps that can help with dyslexia – DigitalAgenda. Albert Einstein and Steve Jobs both had dyslexia, and many science and business leaders are affected. 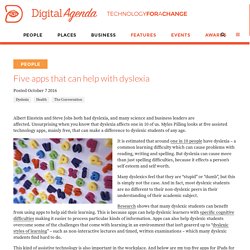 Unsurprising when you know that dyslexia affects one in 10 of us. Myles Pilling looks at five assisted technology apps, mainly free, that can make a difference to dyslexic students of any age. It is estimated that around one in 10 people have dyslexia – a common learning difficulty which can cause problems with reading, writing and spelling. But dyslexia can cause more than just spelling difficulties, because it effects a person’s self esteem and self worth.

Many dyslexics feel that they are “stupid” or “dumb”, but this is simply not the case. MyStudy Bar guide. Why Entrepreneur Stan Gloss Credits Dyslexia for His Success. Stan Gloss, an entrepreneur with dyslexia, launched his first business at age 11. He’s now the cofounder and CEO of BioTeam, a multi-million-dollar company that builds supercomputers to accelerate scientific research. His clients include the National Institutes of Health, Biogen, Autism Speaks and the Centers for Disease Control and Prevention. Growing up, Gloss had a tough time in school. British Dyslexia Association. Home. ADSHE. Dyslexia Research Trust. The Dyslexia-SpLD Trust - Home. Home. The Codpast - Fresh Content for Students & Adults With Dyslexia The Codpast.