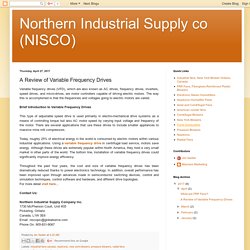 The way this is accomplished is that the frequencies and voltages going to electric motors are varied.Brief Introduction to Variable Frequency Drives This type of adjustable speed drive is used primarily in electro-mechanical drive systems as a means of controlling torque but also AC motor speed by varying input voltage and frequency of the motor. There are several applications that use these drives to include smaller appliances to massive mine mill compressors. Today, roughly 25% of electrical energy in the world is consumed by electric motors within various industrial applications. 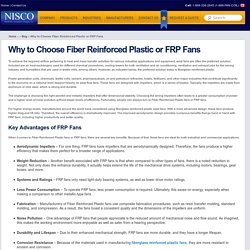 What Are the Working Principles of a Variable Frequency Drive (VFD)? Saving money and developing a solid company reputation can be achieved by reducing energy costs. 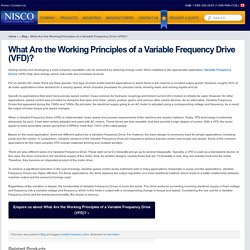 When installed in the appropriate application, Variable Frequency Drives (VFD) help save energy, which cuts costs and increases revenue. For an electric AC motor, there are fixed speeds. This type of motor works best for applications in which there is the need for a constant output speed. However, roughly 50% of all motor applications have demand for a varying speed, which includes processes for precision tools, winding reels, and moving liquids and air. Specific to applications that need more precise speed control, it was common for hydraulic couplings and Direct Current (DC) motors to initially be used. Understanding the Basics and Benefits of Variable Frequency Drives (VFD) 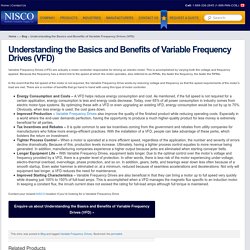 This is accomplished by varying both the voltage and frequency applied. Because the frequency has a direct link to the speed at which the motor operates, also referred to as RPMs, the faster the frequency, the faster the RPMs. In the event that the full speed of the motor is not required, the Variable Frequency Drive works by reducing voltage and frequency so that the speed requirements of the motor’s load are met. There are a number of benefits that go hand in hand with using this type of motor controller.

Energy Consumption and Costs – A VFD helps reduce energy consumption and cost. Industrial fans suppliers in canada. Axial Fans: New technology for clean air. When it comes to ventilating and providing spot cooling for internal machinery components in areas where space limitation is an issue, axial fans can provide an effective solution. 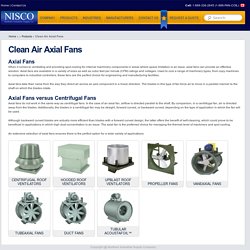 Axial fans are available in a variety of sizes as well as cubic feet per minute (CFM) ratings and voltages. Used to cool a range of machinery types, from copy machines to computers to industrial controllers, these fans are the perfect choice for engineering and manufacturing facilities. Axial fans take their name from the way they direct air across an axis component in a linear direction. The blades in this type of fan force air to move in a parallel manner to the shaft on which the blades rotate.

Axial fans do not work in the same way as centrifugal fans. Although backward curved blades are actually more efficient than blades with a forward curved design, the latter offers the benefit of self-cleaning, which could prove to be beneficial in applications in which high dust concentration is an issue. Outstanding Solutions with New York Blowers. New York Blowers is a reputable company with an outstanding history of manufacturing various fan solutions. 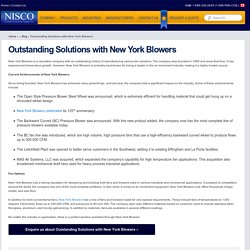 The company was founded in 1889 and since that time, it has experienced tremendous growth. New York Industrial pressure blowers. How to Improve Fan System Performance. Specific to air handling units, there are a number of ways to improve the performance of fan systems. 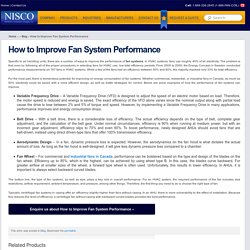 In HVAC systems, fans use roughly 40% of all electricity. The problem is that even by following all of the proper procedures in selecting fans for HVAC use, low total efficiency persists. From 2005 to 2009, the Energy Concept in Sweden conducted performance measurements on 767 fans in HVAC systems. While a few of the fans had an efficiency between 50% and 60%, the majority reached only 33% for total efficiency. The Way Gas Humidifiers Work. There are two primary types of gas humidifiers, flow-through and reservoir, both operated on natural or propane gas. 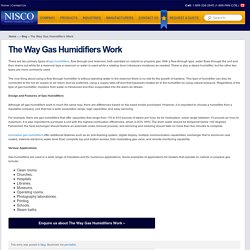 With a flow-through type, water flows through the unit and then drains out while for a reservoir type a reservoir or water is used while a rotating drum introduces moistures as needed. There is also a steam humidifier, but the other two types are more commonly used. The nice thing about using a flow-through humidifier is without standing water in the reservoir there is no risk for the growth of bacteria. This type of humidifier can also be connected to the hot air supply or air return duct as preferred, using a supply take-off duct that bypasses heated air to the humidifier by using natural pressure.

Regardless of the type of gas humidifier, moisture from water is introduced and then evaporated into the warm air stream. Design and Features of Gas Humidifiers Although all gas humidifiers work in much the same way, there are differences based on the exact model purchased. Introduction to Electric Duct Heaters. Electric duct heaters are used around the world for industrial and commercial markets. 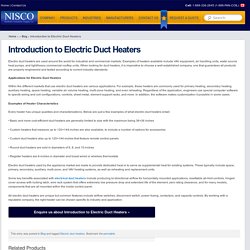 Examples of heaters available include VAV equipment, air handling units, water source heat pumps, and light/heavy commercial rooftop units. When looking for duct heaters, it is imperative to choose a well-established company, one that guarantees all products are properly engineered and tested according to current industry standards. Applications for Electric Duct Heaters Within the different markets that use electric duct heaters are various applications. For example, these heaters are commonly used for primary heating, secondary heating, auxiliary heating, space heating, variable air volume heating, multi-zone heating, and even reheating. Industrial Electric heaters and humidifiers. What are FRP Fans? FRP is the acronym for “Fiberglass Reinforced Plastic” so in the case of FRP fans, these units are designed for corrosive air movement applications. 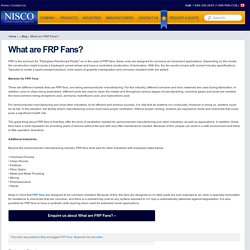 Depending on the model, the construction might include a backward curved wheel and have a controlled construction of lamination. With this, the fan would comply with current industry specifications. Typically to create a spark-resistant product, more layers of graphite impregnation and corrosion resistant cloth are added. A Review of Variable Frequency Drives. Variable frequency drives (VFD), which are also known as AC drives, frequency drives, inverters, speed drives, and micro-drives, are motor controllers capable of driving electric motors. The way this is accomplished is that the frequencies and voltages going to electric motors are varied. Brief Introduction to Variable Frequency Drives This type of adjustable speed drive is used primarily in electro-mechanical drive systems as a means of controlling torque but also AC motor speed by varying input voltage and frequency of the motor.

There are several applications that use these drives to include smaller appliances to massive mine mill compressors. Today, roughly 25% of electrical energy in the world is consumed by electric motors within various industrial applications. Throughout the past four years, the cost and size of variable frequency drives has been dramatically reduced thanks to power electronics technology. Best Blowers Services in New York.