Since 2010, Jim Balfanz has served as President of City Year, steering its continued evolution as a performance-driven organization. Balfanz led City Year’s strategic shift towards addressing the nation’s urban education challenge as a scalable human capital strategy for high-poverty schools and co-authored a 2012 City Year report, “Closing the Implementation Gap,” that highlights the critical role national service can play in helping to improve student achievement in America’s highest need schools.

Jim Balfanz President of City Year: Jim Balfanz and Gillian Smith of City Year – Getting Everyone Involved. A lot of people may look at a large corporation and only see how the company runs their business. 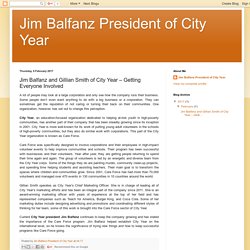 Some people don’t even want anything to do with a big business or a corporation. They can sometimes get the reputation of not caring or turning their back on their communities. One organization, however, has set out to change this perception. City Year, an education-focused organization dedicated to helping at-risk youth in high-poverty communities, has another part of their company that has been steadily growing since its inception in 2001. Jim Balfanz and Gillian Smith of City Year – Taking Educational Work to an International Level. Some people view a business successful when it turns a profit. 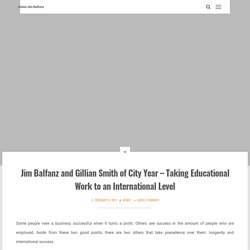 Others see success in the amount of people who are employed. Aside from these two good points, there are two others that take precedence over them: longevity and international success. Starting a business and being able to maintain it over decades is something that is not easily done. This takes consistent profit, dedicated employees, and a strong belief in what you do. Once you are established in your own country, there is sometimes an opportunity to take things to the international stage. Jim Balfanz and Gillian Smith of City Year – Values That Reflect Our Culture. Building a business or putting together and organization has many components and working factors. 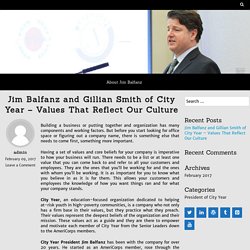 But before you start looking for office space or figuring out a company name, there is something else that needs to come first, something more important. Having a set of values and core beliefs for your company is imperative to how your business will run. There needs to be a list or at least one value that you can come back to and refer to all your customers and employees. They are the ones that you’ll be working for and the ones with whom you’ll be working. 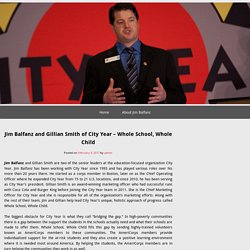 Jim Balfanz has been working with City Year since 1993 and has played various roles over his more than 20 years there. He started as a corps member in Boston, later on as the Chief Operating Officer where he expanded City Year from 15 to 21 U.S. locations, and since 2010, he has been serving as City Year’s president. Gillian Smith is an award-winning marketing officer who had successful runs with Coca Cola and Burger King before joining the City Year team in 2011.

Jim Balfanz and Gillian Smith of City Year – Bridging the Gap. In high-poverty communities students are faced with obstacles and factors that don’t occur to students who live in more well-off communities. 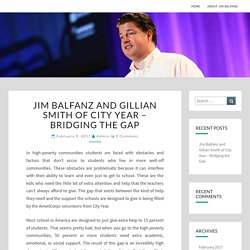 These obstacles are problematic because it can interfere with their ability to learn and even just to get to school. These are the kids who need the little bit of extra attention and help that the teachers can’t always afford to give. The gap that exists between the kind of help they need and the support the schools are designed to give is being filled by the AmeriCorps volunteers from City Year. Most school in America are designed to just give extra help to 15 percent of students. That seems pretty bad, but when you go to the high-poverty communities, 50 percent or more students need extra academic, emotional, or social support.