Misconceptions about laws and theories

What is the difference between a theory and a law? I recently read a journal article* that spurred my curiosity. 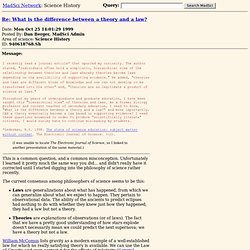 The author stated, "Individuals often hold a simplistic, hierarchical view of the relationship between theories and laws whereby theories become laws depending on the availibility of supporting evidence. " He added, "theories and laws are different kinds of knowledge and one can not develop or be transformed into the other" and, "theories are as legitimate a product of science as laws. " Throughout my years of undergraduate and graduate education, I have been taught this "hierarchical view" of theories and laws. As a former biology professor and current teacher of secondary education, I need to know, "What is the difference between a theory and a law?

" and more importantly, CAN a theory eventually become a law based on supporting evidence? *Lederman, N.G. 1998. (I was unable to locate The Electronic Journal of Science, so I linked to another presentation of the same material.) Science Teaching Reconsidered: A Handbook. Image of a sun that moves about the earth. 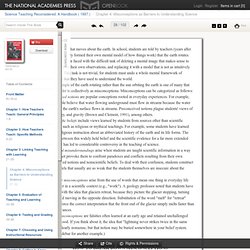 In school, students are told by teachers (years after they have already formed their own mental model of how things work) that the earth rotates. Students are then faced with the difficult task of deleting a mental image that makes sense to them, based on their own observations, and replacing it with a model that is not as intuitively acceptable. This task is not trivial, for students must undo a whole mental framework of knowledge that they have used to understand the world.

The example of the earth rotating rather than the sun orbiting the earth is one of many that teachers refer to collectively as misconceptions. Misconceptions can be categorized as follows: Preconceived notions are popular conceptions rooted in everyday experiences. Scientific Laws and Theories. SCIENTIFIC LAWS and THEORIES I've had a student ask me to clarify the difference between a scientific "law" and a "theory". 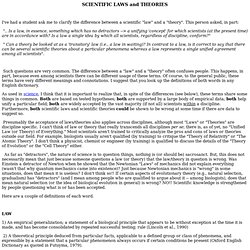 This person asked, in part: ".. Is a law, in essence, something which has no detractors --> a unifying 'concept' for which scientists (at the present time) are in accordance with? Is a law a single idea by which all scientists, regardless of discipline, conform? " " Can a theory be looked at as a 'transitory' law (i.e., a law in waiting)? Such questions are very common. As used in science, I think that it is important to realize that, in spite of the differences (see below), these terms share some things in common. Presumably the acceptance of laws/theories also applies across disciplines, although most "Laws" or "Theories" are discipline specific. As far as "detractors", the nature of science is to question things, nothing is (or should be) sacrosanct. Here are a couple of definitions of each word. 4) 1. Literature Cited Futuyma, D. 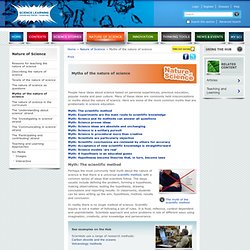 Myth: Science proves ideas. Tips and strategies for teaching the nature and process of science.