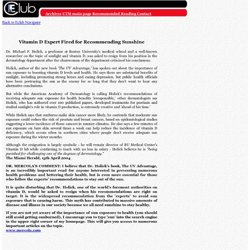 Michael F. Holick, a professor at Boston University's medical school and a well-known researcher on the topic of sunlight and vitamin D, was asked to resign from his position in the dermatology department after the chairwoman of the department criticized his conclusions. Holick, author of the new book has spoken out about the importance of sun exposure to boosting vitamin D levels and health. He says there are substantial benefits of sunlight, including promoting strong bones and easing depression, but public health officials have been portraying the sun as the enemy for so long that they don't want to hear any alternative conclusions. While Holick says that sunburns make skin cancer more likely, he contends that moderate sun exposure could reduce the risk of prostate and breast cancers, based on epidemiological studies suggesting a lower incidence of those cancers in sunnier climates. 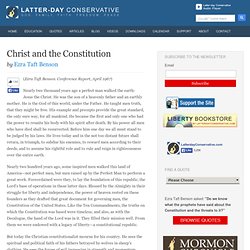 Conference Report, April 1967) Nearly two thousand years ago a perfect man walked the earth: Jesus the Christ. He was the son of a heavenly father and an earthly mother. He is the God of this world, under the Father. He taught men truth, that they might be free. Nearly two hundred years ago, some inspired men walked this land of America—not perfect men, but men raised up by the Perfect Man to perform a great work. But today the Christian constitutionalist mourns for his country. This life is a probation: a probation in which you and I prove our mettle, a probation that has eternal consequences for each of us. The Lord has so arranged things in this life that men are free agents unto themselves to do good or evil.

Clearly, there would be little trial of faith if we received our full reward immediately for every goodly deed, or immediate retribution for every sin. The Lord is displeased with wickedness, and he will help those who oppose it. United States Foreign Policy – Ezra Taft Benson - Latter-day Conservative. Observe good faith and justice towards all Nations; cultivate peace and harmony with all. 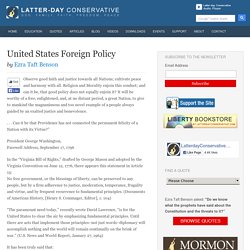 Religion and Morality enjoin this conduct; and can it be, that good policy does not equally enjoin it? It will be worthy of a free, enlightened, and, at no distant period, a great Nation, to give to mankind the magnanimous and too novel example of a people always guided by an exalted justice and benevolence. . . . Can it be that Providence has not connected the permanent felicity of a Nation with its Virtue?” President George Washington, Farewell Address, September 17, 1796. 101 Constitutional Questions To Ask Candidates – W. Cleon Skousen - Latter-day Conservative. W. 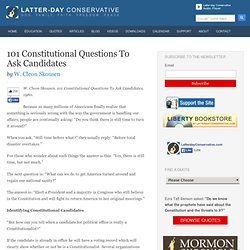 Cleon Skousen. 101 Constitutional Questions To Ask Candidates. 1980. Because so many millions of Americans finally realize that something is seriously wrong with the way the government is handling our affairs, people are continually asking: “Do you think there is still time to turn it around?” When you ask, “Still time before what?” They usually reply: “Before total disaster overtakes.” For those who wonder about such things the answer is this: “Yes, there is still time, but not much.” The next question is: “What can we do to get America turned around and regain our national sanity?”

The answer is: “Elect a President and a majority in Congress who still believe in the Constitution and will fight to return America to her original moorings.” Identifying Constitutional Candidates “But how can you tell when a candidate for political office is really a Constitutionalist?” What Kind of Questions Should Be Asked? 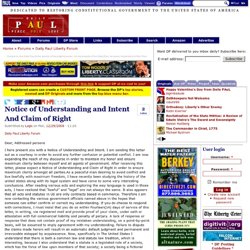 I am sending this letter out as a courtesy in order to avoid any further confusion or potential conflict. I am now expanding the reach of my discourse in order to maintain my honor and ensure maximum clarity between myself and all agents of government. After receiving this letter, please expect a Notice of Understanding and Claim of Right in order to ensure maximum clarity amongst all parties.As a peaceful man desiring to avoid conflict and live lawfully with maximum freedom, I have recently been studying the history of the united states along with its legal system and have come to some very interesting conclusions.

After reading various acts and exploring the way language is used in those acts, I have realized that “lawful” and “legal” are not always the same. The Greatest Speech Ever. Are you a Sovereign Yet Part 1. T4TT - EXCLUSIVE... Dean C. Clifford - Both Sides of The Story Part 2. Freemen Arrest A Judge. Birkenhead UK (part 1)