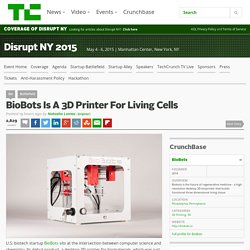 Its debut product, a desktop 3D printer for biomaterials, which was just demoed on stage at TechCrunch Disrupt NY — printing Van Gogh’s ear in replica, no less — combines hardware, software and wetware. It’s the latter area where the core innovation sits, says co-founder Danny Cabrera. Biofabrication, the process of artificially building living tissue structures, is not a new field — there is more than a decade of research in this area already. But Cabrera and his co-founders believe they have spotted an opportunity to overhaul expensive (circa $100,000+), large, complex legacy devices — taking inspiration from the small, low-cost desktop 3D printers being used by the maker movement to extrude plastic. Bioprinting in 3D: Looks like candy, could regenerate nerve cells. The printer looks like a toaster oven with the front and sides removed. 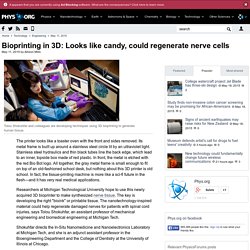 Its metal frame is built up around a stainless steel circle lit by an ultraviolet light. Stainless steel hydraulics and thin black tubes line the back edge, which lead to an inner, topside box made of red plastic. In front, the metal is etched with the red Bio Bot logo. Guarda un cuore in miniatura che batte (stampato in 3D) Mancano 1 giorni al Wired Next Fest. 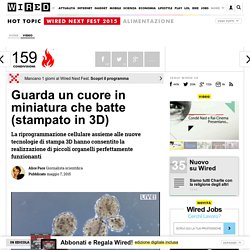 Scopri il programma. Beyond the trinkets: Voxel8 shows 3D electronics printer. Beyond plastic angel paperweights and keychain elves, how complex can complex be in today's output from 3D printers? 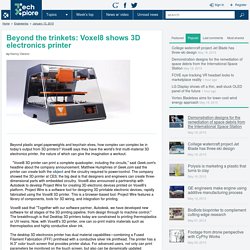 Voxel8 says they have the world's first multi-material 3D electronics printer, the nature of which can give the imagination a workout. "Voxel8 3D printer can print a complete quadcopter, including the circuits," said Geek.com's headline about the company announcement. Matthew Humphries of Geek.com said the printer can create both the object and the circuitry required to power/control. BioBots bioprinter to complement cutting-edge research. A high-resolution desktop 3D bioprinter that builds functional 3D living tissue was shown recently at TechCrunch Disrupt in New York. 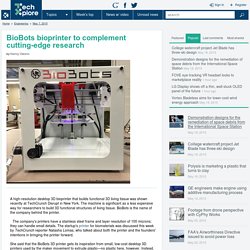 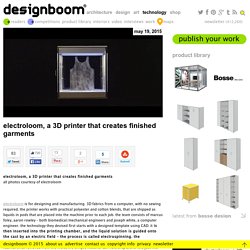 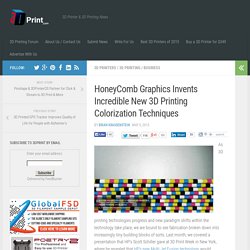 Last month, we covered a presentation that HP’s Scott Schiller gave at 3D Print Week in New York, where he revealed that HP’s new Multi Jet Fusion technology would eventually be capable of fabricating objects based on single voxels, changing the color, material and composition of an object, one voxel at a time. Certainly HP will not be the only company, or Multi Jet Fusion the only technology, which will advance to levels of accuracy allowing for such intricate fabrication. In fact, earlier this week a company called Honeycomb Graphics published a video and revealed a recent patent application for a technology they call Solid Projection Printing (SPP). Material and Property Changing Deposition Method This is probably one of the more fascination sections of the patent applications. Filament 2.0 – Eastman Chemical and taulman 3D Team for n-vent Line of 3D Printing Filament.

3D printing filament is to FFF-based 3D printers as blood is to a mammal’s body. 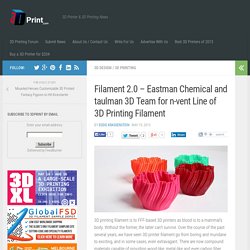 Without the former, the latter can’t survive. Over the course of the past several years, we have seen 3D printer filament go from boring and mundane to exciting, and in some cases, even extravagant. There are now compound materials capable of providing wood-like, metal-like and even carbon fiber traits to objects which are fabricated on our 3D printers. However, there has not yet been a single partnership, occurrence or event that has really moved 3D printing from the past and present into the future. Today that may have just changed. In what could just be the start of the “Filament 2.0″ era, today we learn of a partnership formed between Eastman Chemical Company, taulman 3D and Aleph Objects, to create a new line of 3D printer filament with characteristics that look to advance the quality of products that come off of our printers.

Is 3D Printing Emitting Harmful Toxins? Clean Strands Aims Find Out With Kickstarter Campaign. Rachel Spieczny is a PMP Certified Project Manager who works in the architecture and high-tech fields, and she also helped Zeepro, the 3D printer manufacturer, raise $348,000 on Kickstarter for their startup. 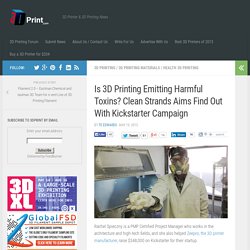 Spieczny says that, while she’s a 3D printing booster of long standing, one element of the technology has gone begging when it comes to study and investigation – the safety of the process to users. “We need to be asking the tough questions, and doing everything we can to ensure 3D printing is safe for everyone,” Spieczny says. Richard H (@RichRap3D) The Bocusini is the first universal Plug & Play food 3D printer, soon on Kickstarter. Apr. 24, 2015 | By Simon When it comes to food-based additive manufacturing, the niche-specific form of 3D printing hasn’t taken off as much as some previously thought it would. 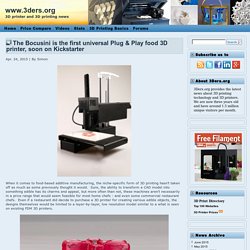 Sure, the ability to transform a CAD model into something edible has its charms and appeal, but more often than not, these machines aren’t necessarily in a price range that would seem feasible for most home chefs - and even some commercial restaurant chefs. Printrbot sur Twitter : "Coming soon….. Printrbot Play. $399 assembled. 100x100x130mm. Metal construction. Mic6 Alu bed. #printrbot.

StaticBoardsES (@StaticBoardsES) Felip Fenollosa (@ffenollosa) The Bocusini Plug and Play 3D Food Printer. Several 3D food printers have been attempted, but now there’s a “plug and play” version called the “Bocusini”. The Bocusini is plug and play due to two key features: A simplified cartridge system which is easily plugged into the printer.A simple app to control the printing process And it really is as simple as that.

You just need to have a selection of cartridges available containing the desired food substances. They say they have successfully tested some 30 different food products: