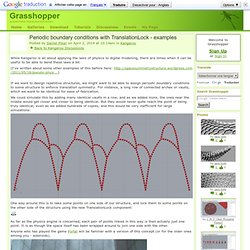 (I've written about some other examples of this before here: If we want to design repetitive structures, we might want to be able to assign periodic boundary conditions to some structure to enforce translation symmetry. For instance, a long row of connected arches or vaults, which we want to be identical for ease of fabrication. We could simulate this by adding many identical vaults in a row, and as we added more, the ones near the middle would get closer and closer to being identical. Voronoi. New tutorial - Developable strips - Part 3. Following on from parts 1 & 2 Once we have relaxed our mesh, and stopped the timer, we can click the Data Dam to pass the result to the next part of the definition: The Stripper* component breaks the mesh into long strips 1 quad wide. 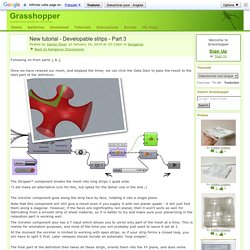 *I did make an alternative icon for this, but opted for the tamer one in the end ;) The Unroller component goes along the strip face by face, rotating it into a single plane. Voronoi. MeshMachine update. A minor update to the remeshing component (read about the earlier release here) This adds the option to also scale the triangle size by distance from the boundaries: download this new version here: (replaces the previous version, no need to change any of the other files) The 2 new inputs are BoundaryScale and BoundaryDistance If BoundaryScale is set to 1 (the default) then it has no effect and everything else works as before. 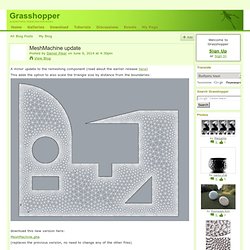 If it is set to (for example) 0.2, then the mesh edges along the boundaries will have a target length of 0.2 multiplied by the Length input value. The BoundaryDistance input controls the size of the transition zone from this reduced boundary edge length to the standard edge length. New tutorial - Developable strips - Part 3. Parametric Truss Part 1. Rhino grasshopper 02. triangulate. Nurbs closed surface to mesh (rhino grasshopper) Tri panel system with Grasshopper. Grasshopper Waffle Script. Solid waffle for laser cutting « Dreamation Workshop. This is a script done last year during spring break, first posted on Grasshopper forum and modified once. 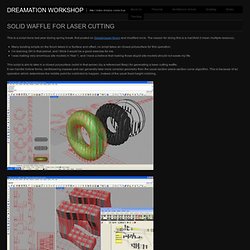 The reason for doing this is a manifold (I mean multiple reasons), Many existing scripts on the forum takes in a Surface and offset, no script takes an closed polysurface for this operation.I’m learning GH in that peirod, and I think it would be a good exercise for me.I was making very enormous site models in Year 1, and I have a believe that making those stupid site models should not waste my life. Geodesic Dome. Desert Domes - The 6v Dome Calculator. Geodesic Dome Notes & Calculator. Education. Parametric Design with GRASSHOPPER – 3D PRINTING oriented Basic grasshopper workshop Lisbon / 21-23 November 2014 [.] 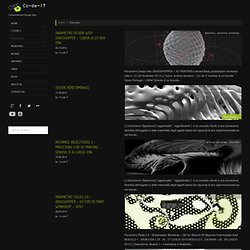 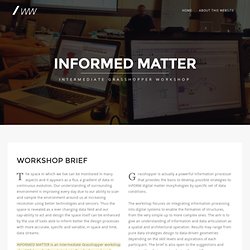 Our understanding of surrounding environment is improving every day due to our ability to scan and sample the environment around us at increasing resolution using better technologies and sensors. Thus the space is revealed as a ever changing data field and our cap-ability to act and design the space itself can be enhanced by the use of tools able to inform better the design processes with more accurate, specific and variable, in space and time, data streams. 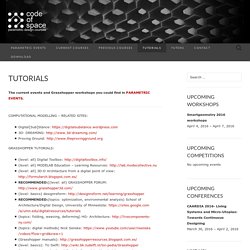 Python General/basics: Double Curvature Surface Rationalization. One of the greatest capabilities of Rhinoceros is the possibility of creating complex double curvature surfaces in a really quick and easy way, if well this characteristic is a great advantage at the moment of representing ideas, it leads us to a very important issue: How can we fabricate this kind of geometrical shapes? 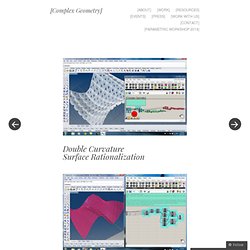 By definition Double curvature surfaces are non developable, this means that you can’t just unroll or smash the surface and get an accurate result. In order to solve this problem, there have been developed a wide variety of schemes that pretend to translate computational complex geometry to the physical world. One of this approaches is the developed in this definition, it consist in subdivide a surface into smaller pieces that may be fabricated from planar materials such as wood, paperboard, metal sheets, etcetera. I also added some attractor functionality, just to make it look fancy, hope you like it. Creative Commons Attribution-Share Alike 3.0 Unported License. New example files - Mesh tools 1. Over the coming weeks I will be posting a complete set of example files to go with the new release (0.096) of Kangaroo. 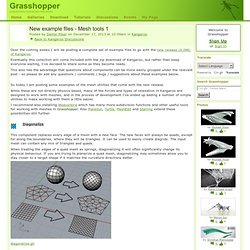 Eventually this collection will come included with the zip download of Kangaroo, but rather than keep everyone waiting, I've decided to share some as they become ready. This also has the advantage that questions about components can be more easily grouped under the relevant post - so please do add any questions / comments / bugs / suggestions about these examples below. So today I am posting some examples of the mesh utilities that come with the new release. While these are not directly physics based, many of the forces and types of relaxation in Kangaroo are designed to work with meshes, and in the process of development I've ended up adding a number of simple utilities to make working with them a little easier.