From Wolfram MathWorld. The word polyhedron has slightly different meanings in geometry and algebraic geometry. 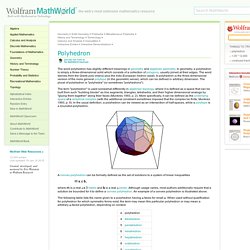 In geometry, a polyhedron is simply a three-dimensional solid which consists of a collection of polygons, usually joined at their edges. The word derives from the Greek poly (many) plus the Indo-European hedron (seat). A polyhedron is the three-dimensional version of the more general polytope (in the geometric sense), which can be defined in arbitrary dimension. The plural of polyhedron is "polyhedra" (or sometimes "polyhedrons"). The term "polyhedron" is used somewhat differently in algebraic topology, where it is defined as a space that can be built from such "building blocks" as line segments, triangles, tetrahedra, and their higher dimensional analogs by "gluing them together" along their faces (Munkres 1993, p. 2).

Introduction. HexDome Introduction to Hexagonal Geodesic Domes Most conventional geodesic domes are based on a triangular tesselation. 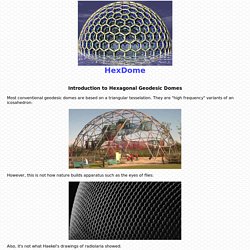 They are "high frequency" variants of an icosahedron: However, this is not how nature builds apparatus such as the eyes of flies: Also, it's not what Haekel's drawings of radiolaria showed: What is a geodesic dome and its digitizing. Voronoi. How can I map a normal triangular grid on a freeform surface...??? Standardized Surface Triangulation 1/2. Folded plane subdivided into equilateral triangles. Hello grasshoppers, I'm student of architecture and I'm new here. 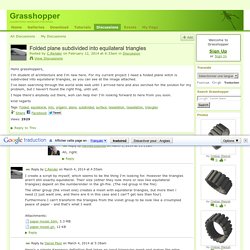 For my current project I need a folded plane witch is subdivided into equilateral triangles, as you can see at the image attached. I've been searching through the world wide web until I arrived here and also serched for the soluton for my problem, but I haven't found the right fing, until yet. Kangaroo Mesh Machine uncomplete mesh. 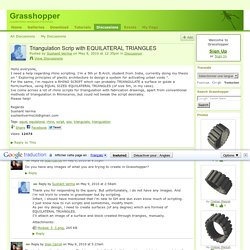 I'm a 5th yr B.Arch. student from India, currently doing my thesis on " Exploring principles of plectic architecture to design a system for activating urban voids ". For the same, i'm require a RHINO SCRIPT which can probably TRIANGULATE a surface or guide a form/surface, using EQUAL SIZED EQUILATERAL TRIANGLES (of size 5m, in my case). Ive come across a lot of rhino scripts for triangulation with fabrication drawings, apart from conventional methods of triangulation in Rhinoceros, but could not tweak the script desirably. Please help! Regards Sushant Verma sushantverma16@gmail.com Tags: equal, equilateral, rhino, script, size, triangulate, triangulation. 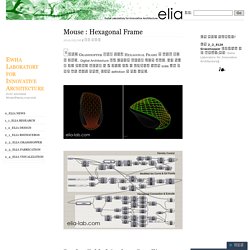 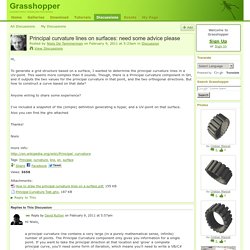 This seems more complex than it sounds. Though, there is a Principal curvature component in GH, and it outputs the two values for the principal curvature in that point, and the two orthogonal directions. But how to construct a curve based on that data? Anyone willing to share some experience? Using Geodesic component 1. 01_iris dome.mov. Planar Quadrilateral : Grasshopper Workshop @ Tamkang University - Flowing Bits. Scale-translation-surface This workshop is invited by professor Chen-Cheng Chen from the architecture department of Tamkang University. 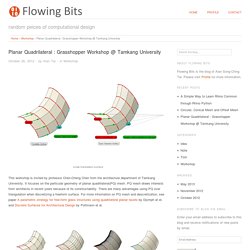 It focuses on the particular geometry of planar quadrilateral(PQ) mesh. PQ mesh draws interests from architects in recent years because of its constructability. There are many advantages using PQ over triangulation when discretizing a freeform surface. For more information on PQ mesh and descretization, see paper A parametric strategy for free-form glass structures using quadrilateral planar facets by Glymph at el. and Discrete Surfaces for Architectural Design by Pottmann et al.

PQ strip The paper by Glymph at el. introduces several methods to construct a PQ mesh. Planar Quad Unroll PQ grasshopper definition There are two things worth noting in the definition. If the model is going to be fabricated with planar material, tabs might need to be added to the faces for construction. Download the definition file here. SmartForm - SMART Solutions Network. SmartForm is a component that is used for applying dynamic relaxation on a SmartMesh. 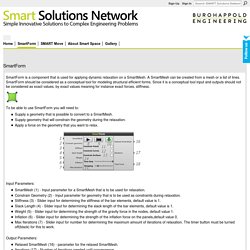 A SmartMesh can be created from a mesh or a list of lines. SmartForm should be considered as a conceptual tool for modeling structural efficient forms. Since it is a conceptual tool input and outputs should not be considered as exact values, by exact values meaning for instance exact forces, stiffness. Schwarz P - Gyroid - Diamond - Neovius - iWP - PH Hybrid. Populate by gradient RGB. Is there anybody have examples for image sampler !

Voronoi + honeycomb. Easily Create Graphical User Interfaces in Rhino Python. I have been doing some work for the Taubman College of Architecture Fabrication Lab. 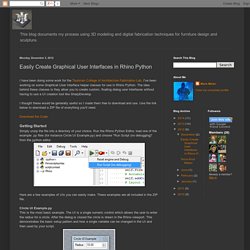 I've been working on some Graphical User Interface helper classes for use in Rhino Python. The idea behind these classes is they allow you to create custom, floating dialog user interfaces without having to use a UI creation tool like SharpDevelop. I thought these would be generally useful so I made them free to download and use. Use the link below to download a ZIP file of everything you'll need. Download the Code Getting Started Simply unzip the file into a directory of your choice. Here are a few examples of UIs you can easily make. Circle UI Example.py This is the most basic example. Relative Prime UI Example.py. Aether – simple speedy spatial fields for Grasshopper. Spatially varying fields, which associate a value (such as a number or a vector) to every point in space, have a wide range of applications. 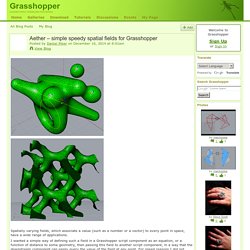 I wanted a simple way of defining such a field in a Grasshopper script component as an equation, or a function of distance to some geometry, then passing this field to another script component, in a way that the downstream component can easily query the value of the field at any point. For speed reasons I did not want to do this by passing millions of sample values. Various tools for fields do already exist in Grasshopper, both natively and as plugins, but of the ones I looked at, I couldn't find any that provided the flexibility and speed I wanted, so I put together a very simple library. For now this includes scalar, vector and frame fields. With the scalar fields, I also made an implicit surface tool.