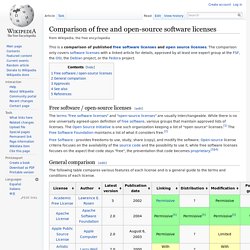 The comparison only covers software licenses with a linked article for details, approved by at least one expert group at the FSF, the OSI, the Debian project, or the Fedora project. Free software / open-source licenses[edit] The terms "free software licenses" and "open-source licenses" are usually interchangeable. While there is no one universally agreed-upon definition of free software, various groups that maintain approved lists of licenses. The Open Source Initiative is one such organization keeping a list of "open source" licenses.[1] The Free Software Foundation maintains a list of what it considers free.[2] Free Software - provides freedoms to use, study, share (copy), and modify the software. General comparison[edit] The following table compares various features of each license and is a general guide to the terms and conditions of each license. Approvals[edit] See also[edit] References[edit] Gutenberg 3D, un proyecto educativo basado en la impresión 3D. 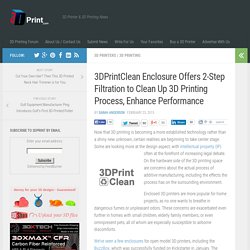 Some are looking more at the design aspect, with intellectual property (IP) often at the forefront of increasing legal debate. On the hardware side of the 3D printing space are concerns about the actual process of additive manufacturing, including the effects the process has on the surrounding environment. ¿Para qué sirve ese cilindro situado en el extremo de nuestros cables?

Amendments to the Electromagnetic Compatibility Directives: Solid Engineering. < Previous article Thursday, 2015-03-12 07:57 Age: 15 Days The companies CEMDAL and Solid Engineering have reached a collaborative agreement to facilitate the conformity process of their products with regarding the compliance with the Electromagnetic Compatibility Directive. 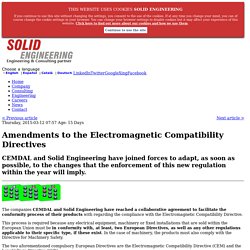 This process is required because any electrical equipment, machinery or fixed installations that are sold within the European Union must be in conformity with, at least, two European Directives, as well as any other regulations applicable to their specific type, if these exist. In the case of machinery, the products must also comply with the Directive for Machinery Safety. The two aforementioned compulsory European Directives are the Electromagnetic Compatibility Directive (CEM) and the Low Voltage Directive (LVD).

CEMDAL and Solid Engineering have joined forces to adapt, as soon as possible, to the changes that the enforcement of this new regulation within the year will imply. Esquema Nueva Directiva CEM. 3DPrintClean Enclosure Offers 2-Step Filtration to Clean Up 3D Printing Process, Enhance Performance. Potential health hazard from 3d printers - Makers' Block. The migration of 3D printer technology from factories to homes has triggered mainstream excitement about the technologys potential. 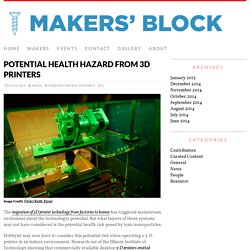 But what buyers of these systems may not have considered is the potential health risk posed by toxic nanoparticles. Hobbyist may now have to consider this potential risk when operating a 3-D printer in an indoor environment. Research out of the Illinois Institute of Technology showing that commercially available desktop 3-D printers emitted potentially harmful nanoparticles that could accumulate in indoor environments.

Published in the academic journal Atmospheric Environment (“Ultrafine particle emissions from desktop 3D printers”), it showed that common, commercially available domestic 3-D printers emitted between 20 and 200 billion ultrafine particles (UFPs) per minute. UFPs are nanoparticles because their diameters are no larger than 10 nanometers. How should this risk should be addressed? Credit: IEEE Spectrum. DIMA 3D - Materiales para impresión 3D. Pre-REACH compared with REACH. Legislative basis In 1967, the first major piece of European chemical supply legislation was published which set the framework for the control of dangerous chemicals. 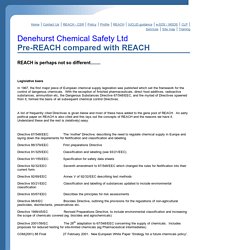 Reach.pdf. NTP_219.PDF. TABLE Z-1 Limits for Air Contaminants. - 1910.1000 TABLE Z-1. NOTE: Because of the length of the table, explanatory Footnotes applicable to all substances are given below as well as at the end of the table. 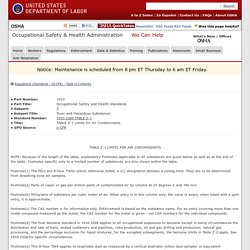 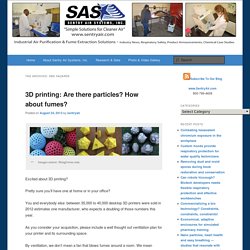 Pretty sure you’ll have one at home or in your office? You and everybody else: between 35,000 to 40,000 desktop 3D printers were sold in 2012 estimates one manufacturer, who expects a doubling of those numbers this year. As you consider your acquisition, please include a well thought out ventilation plan for your printer and its surrounding space. By ventilation, we don’t mean a fan that blows fumes around a room. UFP and 3D printers [See the green sidebar for definitions of acronyms.] Health Risks of Plastics. Chemical Structure of Styrene Acrylonitrile Copolymer Plastic products are everywhere. 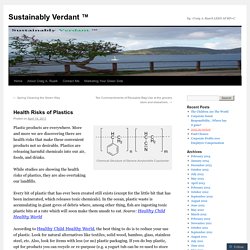 More and more we are discovering there are health risks that make these convenient products not so desirable. Ensinger-Manual_06.pdf. Is 3D Printing Safe? or DIY Testing for HCN from ABS and Nylon 3D Print Material. ABS. Acrylonitrile Butadiene Styrene (ABS) is a commonly used thermoplastic as it is lightweight and can both be injection molded and extruded. 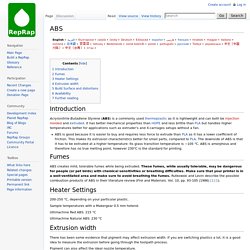 It has better mechanical properties than HDPE and less brittle than PLA but handles higher temperatures better for applications such as extruder's and X-carriages setups without a fan. ABS is good because it is easier to buy and requires less force to extrude than PLA as it has a lower coefficient of friction. This makes its extrusion characteristics better for small parts, compared to PLA. The downside of ABS is that it has to be extruded at a higher temperature: Its glass transition temperature is ~105 °C. HEPA. HEPA-Filter with functional description High-efficiency particulate arrestance or HEPA[1][2] is a type of air filter. 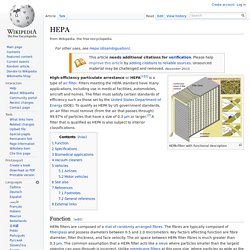 Filters meeting the HEPA standard have many applications, including use in medical facilities, automobiles, aircraft and homes. The filter must satisfy certain standards of efficiency such as those set by the United States Department of Energy (DOE). To qualify as HEPA by US government standards, an air filter must remove (from the air that passes through) 99.97% of particles that have a size of 0.3 µm or larger.[3] A filter that is qualified as HEPA is also subject to interior classifications.

Function[edit] 3D Printering: Wherein ABS Is Dangerous. A lot of the ‘prosumer’ – for as much as I hate that word – 3D printers out there like the Makerbot Replicator and countless other Kickstarter projects only officially support PLA filament. This has a few advantages from a product development standpoint, namely not necessitating the use of a heated build plate. There are other reasons for not supporting ABS and other filaments, as one of the Kickstarter updates for the Buccaneer printer elucidates (update available to backers only, here’s a mirror from somebody on reddit).

The main crux of the Buccaneer team’s decision not to support ABS is as follows: We spoke to our legal counsel about it and they told us that if we officially support a certain “material” type then our printer has to go through massive certification to prove that it is totally safe to use or we will/can get sued badly. Evaluation of respiratory effects of thermal decomposition products... Beyler_Hirschler_SFPE_Handbook_3.pdf. FDM Thermoplastics Model Materials Spec Sheets and MSDS.

So, we thought we’d put together a quick blog to identify some terminology and provide a basic explanation to the hierarchy of requirements. For these examples, we’ll use the EMC Directive 2004/108/EC, but the steps are similar regardless. First, It is important to understand CE marking and how it relates to conformity. Directive 93/68/EEC establishes the scope, structure, and application for CE Marking, which is the official terminology as specified by the EU (in lieu of the term “CE Mark”); and signifies Declaration of Conformity by the manufacturer. 3D Printed Speaker Pushes Rapid Prototyping Boundaries. We think Formlabs has really figured out the key to advertising their line of 3D printers — just design really cool stuff that you can 3D print in resin, and release them publicly!

To celebrate a firmware upgrade to the Form 1+, they’ve designed and released this really cool 3D printed speaker which you can make yourself. Designed by [Adam Lebovitz], the speaker can be printed in just a few jobs, using their flexible resin for the dynamic components. It even sounds pretty damn good. As you can see in the following exploded view of the speaker, almost the entire thing is 3D printed out of just two materials — minus some copper wire, 37 disc magnets, and one cap screw. Of course, this isn’t the first time someone has 3D printed a speaker, but [Adam’s] done a pretty slick job of it. Similar to their 3D printed monocle (which includes the lens!) [Thanks for the tip Jennifer!]

60950-1-搜索结果. List of IEC standards. List of EN standards. Webstore.iec.ch/preview/info_iec60950-1%7Bed2.0%7Den_d.pdf. IEC 61000-4-2-2008_百度文库. EMC(电磁兼容性)_EMI(电磁干扰)-电源网技术频道. EN 55022 CISPR 22. Specification Title: Information Technology Equipment - Radio disturbance characteristics - Limits and methods of measurement EN 55022 is a modified derivative of CISPR 22 and applies to, as the name implies, information technology equipment (ITE). Procedures are given for the measurement of the levels of spurious signals generated by the ITE and limits are specified within the standard for protection of radio services in industrial, commercial or residential environments. The standard is produced by CENELEC, the European Committee for Electrotechnical Standardization.

Ciclop liberado con licencia CC-BY-SA. Ciclop es un kit de escáner 3D DIY. New EU CE Marking 'Blue Book' Guide. For many people who have explored the world of CE marking, they are likely to have come across a very good guide about the implementation of Directives based upon the ‘New Approach.’ The guide was published by the European Commission and was an excellent source of knowledge, not only for the covering the basics, but also helping to tackle some of the grey areas. The guide had a blue front cover and became informally known as the ‘Blue Book’ or guide. The only real down side about the guide was that it was well over 10 years old and was very out of date. For a start, the ‘New Approach’ has now been replaced by the ‘New Legislation Framework,’ but more importantly the Directives covered by the guide have also been replaced.