The Effervescent ENFp « Laila Shares. By Topaz (Personality Cafe) Never ask an ENFP to describe him or herself. 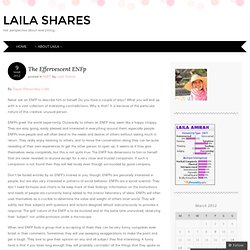 Do you have a couple of days? What you will end up with is a vast collection of interesting contradictions. Why is that? It is because of the particular nature of this creative, unusual person. ENFPs greet the world expectantly. INFJ Personal Growth. What does Success mean to an INFJ? 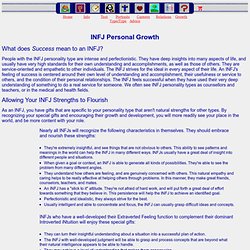 People with the INFJ personality type are intense and perfectionistic. They have deep insights into many aspects of life, and usually have very high standards for their own understanding and accomplishments, as well as those of others. They are service-oriented and empathetic to other individuals. Careers for INFJ Personality Types. Whether you're a young adult trying to find your place in the world, or a not-so-young adult trying to find out if you're moving along the right path, it's important to understand yourself and the personality traits which will impact your likeliness to succeed or fail at various careers. 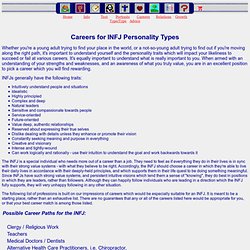 It's equally important to understand what is really important to you. When armed with an understanding of your strengths and weaknesses, and an awareness of what you truly value, you are in an excellent position to pick a career which you will find rewarding. The INFJ is a special individual who needs more out of a career than a job. They need to feel as if everything they do in their lives is in sync with their strong value systems - with what they believe to be right. Famous INFJ And Fictional INFJ People And INFJ Careers. Portrait of an INFJ. As an INFJ, your primary mode of living is focused internally, where you take things in primarily via intuition. 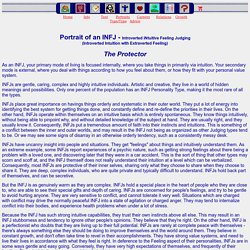 Your secondary mode is external, where you deal with things according to how you feel about them, or how they fit with your personal value system. INFJs are gentle, caring, complex and highly intuitive individuals. Artistic and creative, they live in a world of hidden meanings and possibilities. Only one percent of the population has an INFJ Personality Type, making it the most rare of all the types. INFJs place great importance on havings things orderly and systematic in their outer world.

INFJs have uncanny insight into people and situations. Stage 4: The Mature Soul « Personality & Spirituality. Those undergoing the fourth stage of reincarnation are known as mature souls. 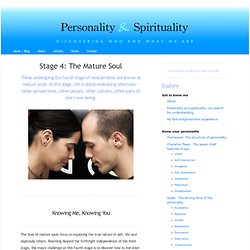 At this stage, life is about embracing otherness — other perspectives, other people, other cultures, other parts of one’s own being. Knowing Me, Knowing You The lives of mature souls focus on exploring the true nature of self, life and especially others. Reaching beyond the forthright independence of the third stage, the major challenge at this fourth stage is to discover how to live inter-dependently with others, and other-ness in general. So … Whereas the young soul focuses on being assertive, competitive and successful, the mature soul focuses on being sensitive, cooperative and authentic.Whereas a young soul insists that its own perspective is right, the mature soul recognises that other perspectives are equally valid.Whereas for the young soul self-interest is all-important, the mature soul is more concerned with the self-other relationship.

Mature Soul Perceptions In other words: Empathy. The Sage soul « Personality & Spirituality. The Sage is one of the seven soul types or roles in essence. 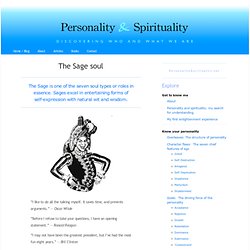 Sages excel in entertaining forms of self-expression with natural wit and wisdom. “I like to do all the talking myself. It saves time, and prevents arguments.” — Oscar Wilde“Before I refuse to take your questions, I have an opening statement.” — Ronald Reagan“I may not have been the greatest president, but I’ve had the most fun eight years.” — Bill Clinton. The Michael Teachings « Personality & Spirituality. Back in 1979, novelist Chelsea Quinn Yarbro presented a whole new framework for understanding personality and spirituality. 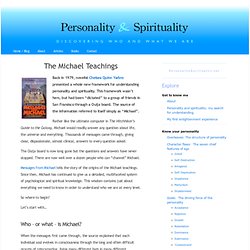 This framework wasn’t hers, but had been “dictated” to a group of friends in San Fransisco through a Ouija board. The source of the information referred to itself simply as “Michael”. Rather like the ultimate computer in The Hitchhiker’s Guide to the Galaxy, Michael would readily answer any question about life, the universe and everything. Thousands of messages came through, giving clear, dispassionate, almost clinical, answers to every question asked. The Ouija board is now long gone but the questions and answers have never stopped. Messages from Michael tells the story of the origins of the Michael teachings.

Growth « Personality & Spirituality. GROWTH is one of seven possible goals in life, chosen by a soul before taking birth. 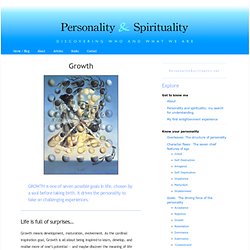 It drives the personality to take on challenging experiences. Life is full of surprises… Growth means development, maturation, evolvement. Finding Your Bliss: A Quick Strategy. A major source of discontent in many people’s lives not knowing what they truly want. 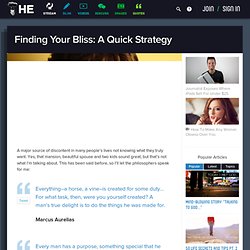 Yes, that mansion, beautiful spouse and two kids sound great, but that’s not what I’m talking about. This has been said before, so I’ll let the philosophers speak for me: Everything–a horse, a vine–is created for some duty… For what task, then, were you yourself created? A man’s true delight is to do the things he was made for. Marcus AureliasTweet Every man has a purpose, something special that he can do better than anyone else. What do you want out of this whole “life” thing?

This is one of the hardest questions for people to answer and yet it’s probably the most important question to know the answer to!