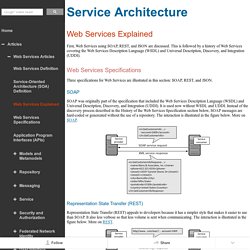 Difference between SOAP and REST web services in java - Java tutorial for beginners. Spring MVC Configuración (I) - Arquitectura Java. Maven – Introduction. Introduction Maven, a Yiddish word meaning accumulator of knowledge, was originally started as an attempt to simplify the build processes in the Jakarta Turbine project. 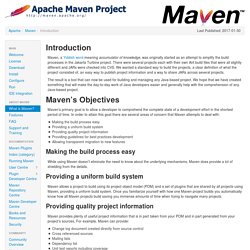 There were several projects each with their own Ant build files that were all slightly different and JARs were checked into CVS. We wanted a standard way to build the projects, a clear definition of what the project consisted of, an easy way to publish project information and a way to share JARs across several projects. The result is a tool that can now be used for building and managing any Java-based project. 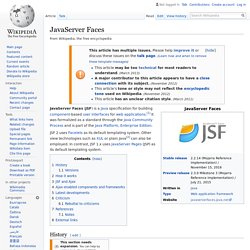 Other view technologies such as XUL or plain Java[2] can also be employed. In contrast, JSF 1.x uses JavaServer Pages (JSP) as its default templating system. History[edit] In 2001, the original Java Specification Request (JSR) for the technology that ultimately became JavaServer Faces proposed developing a package with the name javax.servlet.ui[3] By June 2001, JavaWorld would report on Amy Fowler's team's design of "the JavaServer Faces API" (aka "Moonwalk") – "an application framework for creating Web-based user interfaces".[4] Epoch Converter - Unix Timestamp Converter. Java - Joda DateTime to Timestamp conversion. Eclipse, Android and Java training and support. Recursion – Java, SQL and jOOQ. There has been a lot of hype about the buzzword “web scale“, and people are going through lengths of reorganising their application architecture to get their systems to “scale”. 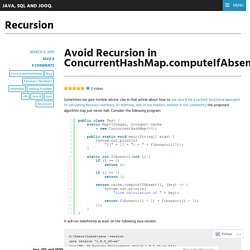 But what is scaling, and how can we make sure that we can scale? Different aspects of scaling The hype mentioned above is mostly about scaling load, i.e. to make sure that a system that works for 1 user will also work well for 10 users, or 100 users, or millions. Spring Tutorial for Beginners. Spring Framework Tutorial For Beginners. About Me I'm Ranga Karanam, an Architect with 15 Years of Java programming and design with major banking clients across the world. 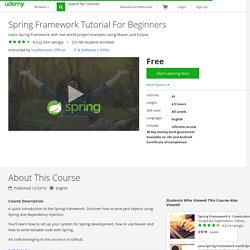 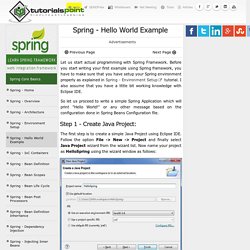 Before you start writing your first example using Spring framework, you have to make sure that you have setup your Spring environment properly as explained in Spring - Environment Setup tutorial. I also assume that you have a little bit working knowledge with Eclipse IDE. So let us proceed to write a simple Spring Application which will print "Hello World! " Hello, World! - Learn Java - Free Interactive Java Tutorial. Java is an object oriented language (OOP). 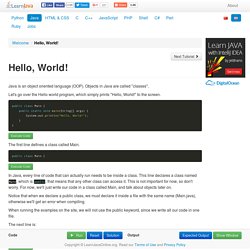 Objects in Java are called "classes". Let's go over the Hello world program, which simply prints "Hello, World! " Intermediate Java programming. Before you start About this tutorial This tutorial introduces you to capabilities of the Java language that are more sophisticated than those covered in the "Introduction to Java programming" tutorial (see Resources for a link to this and other material referenced in this tutorial). 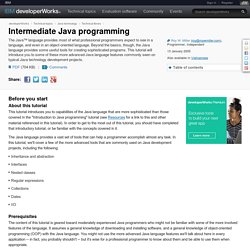 In order to get to the most out of this tutorial, you should have completed that introductory tutorial, or be familiar with the concepts covered in it. The Java language provides a vast set of tools that can help a programmer accomplish almost any task. In this tutorial, we'll cover a few of the more advanced tools that are commonly used on Java development projects, including the following: Open source Java projects: Docker Swarm. This installment of Open source Java projects introduces Java developers to Docker Swarm. 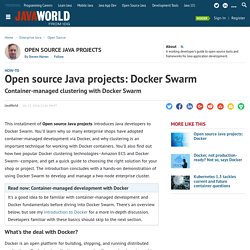 You'll learn why so many enterprise shops have adopted container-managed development via Docker, and why clustering is an important technique for working with Docker containers. You'll also find out how two popular Docker clustering technologies--Amazon ECS and Docker Swarm--compare, and get a quick guide to choosing the right solution for your shop or project. Java Student Projects. WWIII (World War III)Donald Trump accused Hillary Clinton of being so incompetent she would start WWIII. 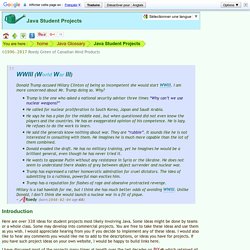 I am more concerned about Mr. Trump doing so. Why? Trump is the one who asked a national security advisor three times Why can’t we use nuclear weapons? He called for nuclear proliferation to South Korea, Japan and Saudi Arabia.He says he has a plan for the middle east, but when questioned did not even know the players and the countries. La importancia del prototipado. Assert (JUnit API) Java.lang.Object org.junit.Assert public class Assertextends java.lang.Object A set of assertion methods useful for writing tests. Java Date Time - Instant EPOCH example. Solve Your Math Problem. MIT6 005F11 lec01 add. Iterator (Java Platform SE 8 ) Providing Constructors for Your Classes (The Java™ Tutorials > Learning the Java Language > Classes and Objects)

A class contains constructors that are invoked to create objects from the class blueprint. Constructor declarations look like method declarations—except that they use the name of the class and have no return type. For example, Bicycle has one constructor: public Bicycle(int startCadence, int startSpeed, int startGear) { gear = startGear; cadence = startCadence; speed = startSpeed; } To create a new Bicycle object called myBike, a constructor is called by the new operator: Roots of x^2-9x. Change the icon of .jar file (Java in General forum at Coderanch) Specified VM install not found: type Standard VM, name jre7. JavaRanch Campfire - Pass By Value, Please. Pass-by-Value Please (Cup Size continued) If you haven't read the Cup Size story, this one won't make sense. Or it will make sense, but you'll think its really stupid. Spring tutorial by Wideskills.

1.1 Spring Overview SJava pring Framework is an open source framework that provides all infrastructure needs for the rapid development of standard and enterprise java applications . Spring Framework was first released in year 2004.Since then spring has added a lot of new functionality day by day and release by release . Part I. Welcome to Spring Roo. 4. New Features and Enhancements in Spring Framework 4.1. Spring 4.1 introduces a much simpler infrastructure to register JMS listener endpoints by annotating bean methods with @JmsListener. The XML namespace has been enhanced to support this new style (jms:annotation-driven), and it is also possible to fully configure the infrastructure using Java config (@EnableJms, JmsListenerContainerFactory). It is also possible to register listener endpoints programmatically using JmsListenerConfigurer.