Boroditsky ea 2003. Germans try to get their tongues around gender-neutral language. Der, die or das? 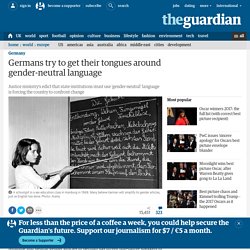 For centuries, the seemingly arbitrary allocation of masculine, feminine and neutral gender articles in German has driven non-native speakers to despair. "In German, a young lady has no sex, while a turnip has," the American writer Mark Twain once complained. "Think what overwrought reverence that shows for the turnip, and what callous disrespect for the girl. " But hope may finally be in sight. Changing attitudes to gender are increasingly transforming the German language, and some theorists argue that scrapping the gendered articles altogether may be the most logical outcome.

Gendered Grammar Linked to Global Sexism. Languages in which nouns are given male or female status are linked to gender inequality, according to a new study that compares languages and equality across the globe. 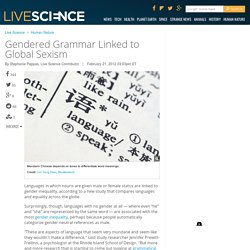 Surprisingly, though, languages with no gender at all — where even "he" and "she" are represented by the same word — are associated with the most gender inequality, perhaps because people automatically categorize gender-neutral references as male. "These are aspects of language that seem very mundane and seem like they wouldn't make a difference," said study researcher Jennifer Prewitt-Freilino, a psychologist at the Rhode Island School of Design.