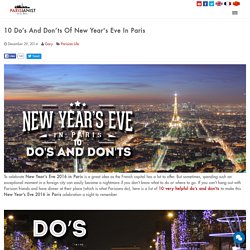 DON'T expect crazy fireworks in Paris: As surprising as it may sound, Paris is one of the only international capitals that does not organize any major fireworks for New Year’s Eve (the event at the Arc de Triomphe is more a sound and light show). You’ll have to wait until July 14th (Bastille Day) for an awesome fireworks show lit from the Eiffel Tower. 2. DON'T go to the Eiffel Tower: You now know that there are no fireworks, but you are still thinking that the Eiffel Tower is the place to be for an awesome celebration? 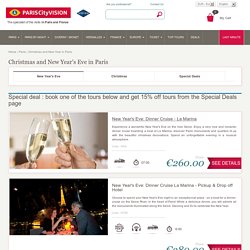 Paris, one of the most beautiful cities in the world, provides a romantic and spectacular setting that is even more impressive during end of the year celebrations. Numerous monuments are often cloaked in snow and covered in lights during this festive period, creating an undeniable Parisian charm. If you’re lucky enough to sojourn in Paris during the Christmas holidays, extending your stay until New Year’s Day would be the opportunity to admire the City of Lights at its most beautiful. You could spend a memorable night out on New Year’s Eve before enjoying the first day in 2016 in the world’s most famous capital. Paris on a budget. By Nicola Williams · It's no secret that Paris, by its very nature as a capital, can be pricey and often stars on the 'World's Most Expensive Cities' lists. 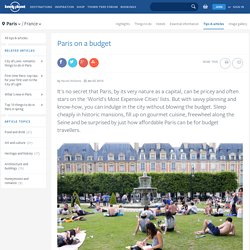 But with savvy planning and know-how, you can indulge in the city without blowing the budget. Sleep cheaply in historic mansions, fill up on gourmet cuisine, freewheel along the Seine and be surprised by just how affordable Paris can be for budget travellers. Pin this image Paris has plenty of green spaces perfect for lazing around and picnicking on market goods.

Plan ahead Paris fills up fast at peak times. Museum lovers should visit the first weekend of any month when museum admission – including top sights Musée d'Orsay, Centre Pompidou, and the Louvre (Nov-Mar only) – is free. Discounts & freebies Build your itinerary around any discounts you’re eligible for: EU citizens under 26 years enjoy free admission at national museums and monuments, including the Louvre, Musée d’Orsay, Sainte Chapelle, Musée Picasso and Musée Rodin. Paris on a Budget - Budget - TravelChannel.com. There's no need to spend a fortune to enjoy the City of Light. 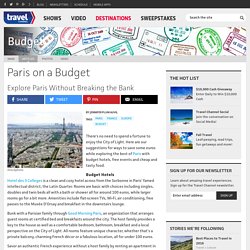 Here are our suggestions for ways to save some euros while exploring the best of Paris with budget hotels, free events and cheap and tasty food. Budget Hotels Hotel des 3 Colleges is a clean and cozy hotel across from the Sorbonne in Paris' famed intellectual district, the Latin Quarter. Rooms are basic with choices including singles, doubles and twin beds all with a bath or shower all for around 100 euros, while larger rooms go for a bit more.

Amenities include flat-screen TVs, Wi-Fi, air conditioning, free passes to the Musée D'Orsay and breakfast in the downstairs lounge. Bunk with a Parisian family through Good Morning Paris, an organization that arranges guest rooms at certified bed and breakfasts around the city. Savor an authentic French experience without a host family by renting an apartment in the city through Paris Attitude. Cheap Eats Sample French bistro fare with the reasonable prix-fixe menu at La Ferrandaise. Visiting Paris on a Budget: Tips and Tricks. Paris can be an incredibly expensive city-- it is, after all, a world center for luxury goods, gourmet restaurants, opulent palace hotels and the like. 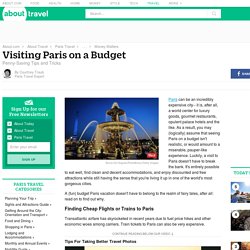 As a result, you may (logically) assume that seeing Paris on a budget isn't realistic, or would amount to a miserable, pauper-like experience. Luckily, a visit to Paris doesn't have to break the bank. It's entirely possible to eat well, find clean and decent accommodations, and enjoy discounted and free attractions while still having the sense that you're living it up in one of the world's most gorgeous cities.

A (fun) budget Paris vacation doesn't have to belong to the realm of fairy tales, after all: read on to find out why. Finding Cheap Flights or Trains to Paris Transatlantic airfare has skyrocketed in recent years due to fuel price hikes and other economic woes among carriers. Continue reading below our video Loaded: 0% Progress: 0% Finally, need to book a place to stay in August? Traveling During Low Season is Best. 22 Ways to Save Money in Paris. Uncorking a bottle of French wine on a sunny day, spreading brie on a baguette, gazing out on the Paris skyline in front of the Sacré-Coeur in Montmartre — to me, that’s the perfect day. 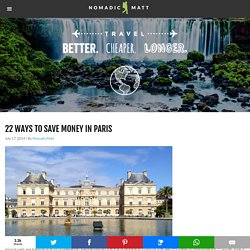 Paris is one of my favorite cities in the world thanks to its cobblestone streets lit up at night under the glow of street lights, historic architecture, incredible music, savory delicious food, and smartly dressed locals. Budget Paris - Paris on the cheap - how to do more with less. The About-France.com guide to Paris: getting round Paris, main tourist attractions and other things to see and do . 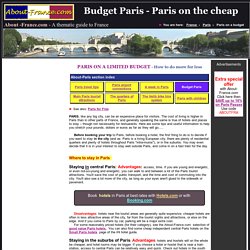 The Eiffel Tower. Things to do in Paris, France. News about #paris. Paris tourist office - Official website. Paris travel guide. Paris Paris, the cosmopolitan capital of France, is one of the largest agglomerations in Europe, with 2.2 million people living in the dense, central city and almost 12 million people living in the whole metropolitan area. 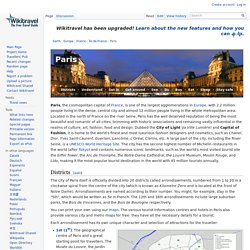