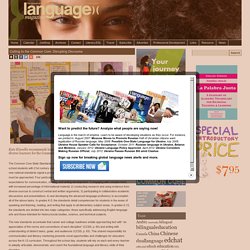 These new national standards signal a pronounced shift in how academic language and literacy instruction must be approached. Four particular competencies are emphasized that represent decidedly new expectations for communication, reading, and writing development: 1) engaging with complex texts, with increased percentage of informational material; 2) conducting research and using evidence from diverse sources to construct verbal and written arguments; 3) participating in collaborative academic discussions and presentations; 4) and developing the advanced language proficiency to accomplish all of the above tasks. References August, D., & Shanahan, T.

Esea essa summary. Accountability for Recently Arrived ELLs: What's Fair? On Wednesday night, the House of Representatives voted overwhelmingly in favor of the new Every Student Succeeds Act (ESSA) bill to replace No Child Left Behind. 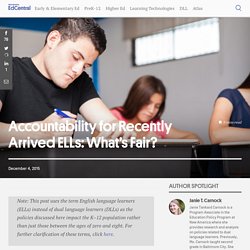 With expected support from the Senate and the President, the bill will most likely become law in the coming weeks. As my colleague Conor Williams highlights in a recent post, the new law would dramatically reduce the federal role in accountability systems and consequences for language learners. ESEA Rewrite Could Serve as &apos;Huge Civil Rights&apos; Bill for ELLs, Some Advocates Say - Learning the Language.

The proposed rewrite of the Elementary and Secondary Education Act could serve as a "huge civil rights protection" for the nation's 5-million plus English-language learners, some ELL advocates say. 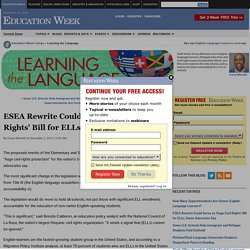 The most significant change in the legislation would shift accountability for English-learner students from Title III (the English-language acquisition section of the ESEA) to Title I (where everyone else's accountability is). The legislation would do more to hold all schools, not just those with significant ELL enrollment, accountable for the education of non-native English-speaking students. "This is significant," said Brenda Calderon, an education policy analyst with the National Council of La Raza, the nation's largest Hispanic civil rights organization. Educational Leadership:Multiple Measures:Balanced Assessment. Tracy A. 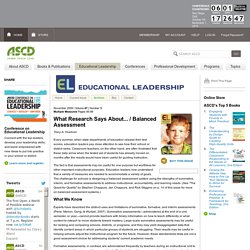 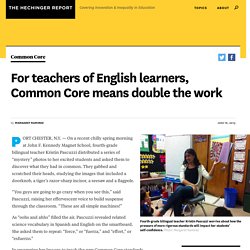 Kennedy Magnet School, fourth-grade bilingual teacher Kristin Pascuzzi distributed a series of “mystery” photos to her excited students and asked them to discover what they had in common. They gabbed and scratched their heads, studying the images that included a doorknob, a tiger’s razor-sharp incisor, a seesaw and a flagpole. New York Compels 20 School Districts to Lower Barriers to Immigrants. Twenty New York school districts found to be blocking access for undocumented immigrant children will be forced to modify their enrollment policies to break down illegal barriers to education, the state attorney general’s office said on Wednesday. 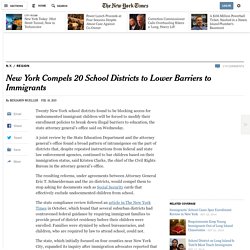 A joint review by the State Education Department and the attorney general’s office found a broad pattern of intransigence on the part of districts that, despite repeated instructions from federal and state law enforcement agencies, continued to bar children based on their immigration status, said Kristen Clarke, the chief of the Civil Rights Bureau in the attorney general’s office. The resulting reforms, under agreements between Attorney General Eric T. Internationals Network For Public Schools. Study of Deeper Learning: Opportunities and Outcomes. The Study of Deeper Learning: Opportunities and Outcomes examines how some schools have provided opportunities for students to acquire deeper learning skills and how these opportunities are related to student outcomes. 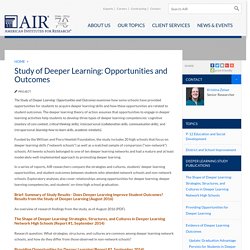 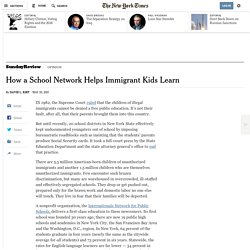 It’s not their fault, after all, that their parents brought them into this country. But until recently, 20 school districts in New York State effectively kept undocumented youngsters out of school by imposing bureaucratic roadblocks such as insisting that the students’ parents produce Social Security cards. It took a full-court press by the State Education Department and the state attorney general’s office to end that practice. The Long Civil Rights Movement - Rethinking Magnet School Policies and Practices: Rethinking Magnet School Policies and Practices.

Simon Sinek: How great leaders inspire action. Private Interests Coming to a Public School Near You. Government agencies are falling short in their efforts to reform education, so corporations are stepping in. 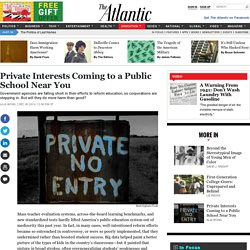 But will they do more harm than good? Brad Higham/Flickr Mass teacher evaluation systems, across-the-board learning benchmarks, and new standardized tests hardly lifted America’s public education system out of mediocrity this past year. In fact, in many cases, well-intentioned reform efforts became so entrenched in controversy, or were so poorly implemented, that they undermined rather than boosted student success.