Karl Lagerfeld takes Chanel on a nature trail in Paris. At Chanel, the show starts long before the clothes appear. 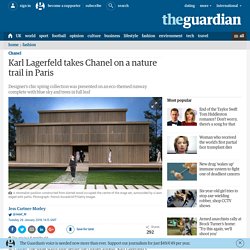 Karl Lagerfeld’s overture began a few days ahead of this collection with the show tickets: simple slabs of eco-friendly plywood looking nothing like haute couture’s traditional beribboned and gold-embossed invitations. Once inside the Grand Palais on the day of the show, guests found themselves transported from the leaden skies and frenetic streets of Paris to a blissed-out, spa-like stage set, with a painted blue sky lit by floodlights and a backdrop of trees in full leaf. A minimalist pavilion in slatted wood sat in the centre of a lawn edged by paths picked out in yet more pale wood. The natural idyll was a notable departure from Lagerfeld’s recent Chanel shows, which have been staged in a Paris street scene (September 2014), a cafe (March 2015), a casino (July 2015) and an airport (October 2015). 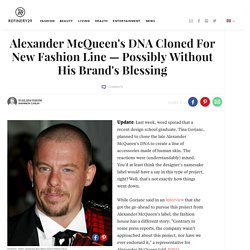 Update: Last week, word spread that a recent design school graduate, Tina Gorjanc, planned to clone the late Alexander McQueen's DNA to create a line of accessories made of human skin. The reactions were (understandably) mixed. You'd at least think the designer's namesake label would have a say in this type of project, right?

Well, that's not exactly how things went down. While Gorjanc said in an interview that she got the go-ahead to pursue this project from Alexander McQueen's label, the fashion house has a different story: "Contrary to some press reports, the company wasn't approached about this project, nor have we ever endorsed it," a representative for Alexander McQueen told WWD. Gorjanc implied that Kering, which owns Alexander McQueen "was aware of the project," per The New York Times. While the project appears to have been mostly cleared of legal issues, the ethics are still coming into question. Fashion Brand 'What Daisy Did' Is Employing Homeless People. 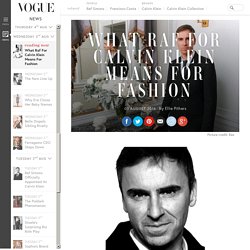 He's presumably worked out some doggy-day-care options, because on Tuesday it was confirmed that the 48-year-old Belgian designer will take the helm at Calvin Klein. Not only will he replace creative directors Francisco Costa, who designed the high-end womenswear line, and Italo Zucchelli, his menswear counterpart, but he will also implement Calvin Klein's new global creative strategy: to "unify all Calvin Klein brands under one creative vision," according to a statement released in April by the brand. Related Show That last nugget might make this appointment look challenging for Simons, given his past comments about the system fashion has adopted. 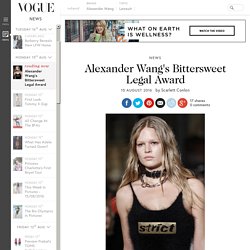 The brand, however, is unlikely to receive the actual amount, as the owners of the domains selling the illegal goods are impossible to trace. "The court system regularly awards very large amounts for the symbolic significance, as a means of deterring other individuals and parties. In other words, Alexander Wang is unlikely to receive $90 million," according to a spokesperson for the brand, reports WWD. It is the first counterfeit case that the company has pursued. Rio Olympics 2016: Laura Trott, Jason Kenny, Giles Scott golds for GB on day 11 - BBC Sport.