History. Meet The Spornosexual: How A Weak Economy Sparked The Selfie-Generation. Poor economies impact countries in a number of detrimental ways including higher rates of poverty, unemployment and chronic disease.

Now, a new study shows the bad economy is to blame for another unfortunate trend: the rise of the selfie generation and "spornosexuality. " As PlanetFreeWill.com's Joseph Jankowski reports, according to a new study from the University of East Anglia (UEA), young men are seeking value through their bodies rather than traditional value creation because of poor economic conditions. Since the 2008 financial crisis, more men have been taking to social media to post images of their fit bodies, says the study’s author, Dr Jamie Hakim.

The term referred to a new generation of men who spent a significant amount of time and money on fashion, male grooming products, and appearances. In his essay, Simpson defined metrosexual as “the single young man with a high disposable income, living or working in the city (because that’s where all the best shops are)” and called him the “most promising consumer market of the decade.” But that was the 90s. The 2000s saw an explosion in male beauty consumerism: the gelled, manicured, tanned, and toned boys on Jersey Shore are no longer specifically Jersey–Italian archetypes. Welcome to the real Millennial Generation - Digging deep into their lives. As the youngest of the Millennial Generation come of age, it is clear what a powerful and important population this is for advertisers. 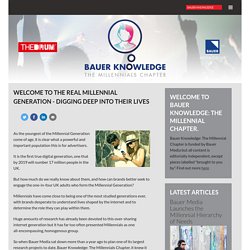 It is the first true digital generation, one that by 2019 will number 17 million people in the UK. But how much do we really know about them, and how can brands better seek to engage the one-in-four UK adults who form the Millennial Generation? Millennials have come close to being one of the most studied generations ever, with brands desperate to understand lives shaped by the internet and to determine the role they can play within them. Huge amounts of research has already been devoted to this over-sharing internet generation but it has far too often presented Millennials as one all-encompassing, homogenous group. The 'selfie' craze: who are more vain, men or women? There are around eleven million 18- to 30-year-olds in the UK and they posted a billion selfies in 2014, according to smartphone maker HTC, which polled 2,000 people on their habits. 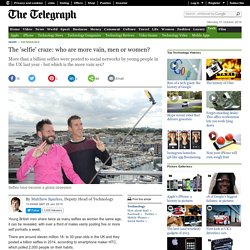 The main reason for men to take selfies was to show off or attract the opposite sex, the survey revealed. A quarter of men polled share selfies to make current or previous partners jealous, and one in ten did it to make themselves more desirable to potential partners. In comparison, half that amount of women take selfies to make ex or partners jealous (just 13 per cent), and only one in 15 (seven per cent) take pictures to make themselves more desirable to potential partners. The main reason women take selfies is to share what they’re doing with friends (35 per cent) and to record memories (26 per cent). But men and women are equally as likely to share selfies to show off (19 per cent). However, 12 per cent of women who are posting selfies of their bodies admitted to revealing their breasts.

It’s not easy being a spornosexual man. Spornosexual may be an uglier, clumsier word than metrosexual - the term Simpson came up with to describe a new breed of man 20 years ago - but then spornosexuals themselves are less subtle than their metrosexual predecessors.

With metrosexuality and the grooming it entails becoming the norm, men have to go to ever greater lengths to stand out. You don’t have to have heard of the term before to have noticed that men are getting bigger. The sort of bodies that once only graced the cover of Men’s Health are popping up in pubs; men are fretting about getting themselves ‘beach ready’ in a way that used to be limited to women; the UK fitness supplement industry is now worth more than £260 million; hiring a personal trainer is no longer the preserve of celebrities and athletes but something office workers do too.

The 'spornosexual' rely on toning their bodies and posting selfies for status. The secret to looking effortlessly stylish. If there’s a fabric that is the basis of all men’s wear, it has got to be denim – the iconic material that all the greatest styles are made of. 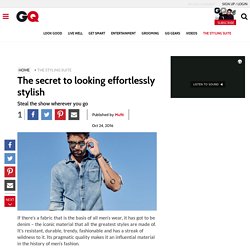 It’s resistant, durable, trendy, fashionable and has a streak of wildness to it. Its pragmatic quality makes it an influential material in the history of men’s fashion. Athlete Interviews. The new age man: Rise of the spornosexual - Fashion Weekly. Left to right: Aries, Taurus and Gemini.

Aries. From Poldark to Bieber, there's a male body ideal but is it problematic? When Poldark returned for its second series on BBC1, it was clear who the real breakout star of the show was: Aidan Turner’s chest. 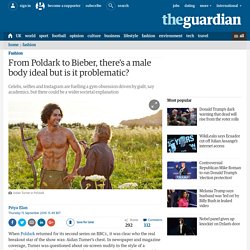 In newspaper and magazine coverage, Turner was questioned about on-screen nudity in the style of a Hollywood starlet opening up about topless scenes. A month earlier, Justin Bieber and Orlando Bloom had appeared fully naked in competitive photo opportunities, a sort of Gladiatorial battle for the Pokémon Go generation. The celebrity male body was not only being more objectified than ever before, it was becoming prime real estate. Could a knock-on effect be a rise in male body issues? A study from the University of Lincoln, links exposure to images of musclebound men with fuelling gym attendance. The study goes further, linking gym attendance with feelings of inadequacy, rather than a desire to build muscle. Inside 'Spornosexual Pride': a Mecca for men who treat their bodies as temples. The Men's Health guide to Spornosexuality. First the credit crunch, then austerity, and finally the post-Brexit downturn.

It’s safe to say that our economic situation could be described with plenty of four-letter words. But instead of counting our pennies and sobbing into ice cream, modern men have been consoling themselves at the squat rack. BBC Radio 1 - Newsbeat Documentaries, Bigorexia: Never Buff Enough. About Mark Simpson. An Error Occurred Setting Your User Cookie. The Sexualisation Of Men In Advertising. Trending News: Are Men Just As Sexualized As Women In Advertising?

Crucially, he explains, his negative body image existed before he became a model. Tommy Hilfiger x Rafael Nadal: it all comes off. Austerity has caused young men to turn into 'spornosexuals' David Beckham and James Corden's New Underwear Line. The Rise And Rise of the Spornosexual. Though Zyzz is no longer with us, many others sharing his philosophy have become Instagram celebrities. Leaders of the pack include Yugoslavian fitness model Sadik Hadzovic (150k followers), former coal miner Cory Gregory (305k followers) and aptly-named Canadian model Marc Fitt (490k followers): men comparatively unknown to the world at large, but with a growing and appreciative online fanbase ready and willing to fawn over their "big ass lats and shoulders", "awesome chest pump" and "clavicle width" whenever they post a pic (which, fear not, is regularly).

Among the most successful of the online sporno generation is Lazar Angelov, a Bulgarian personal trainer who commands a vast audience on both Facebook and Instagram (7.8m likes and 1.2m followers, respectively). On Instagram, an unapologetic snap of his stomach, captioned simply "#Monday #AbsCheck", accrues 43.7k likes. Spornosexuals: what is this new generation of men?