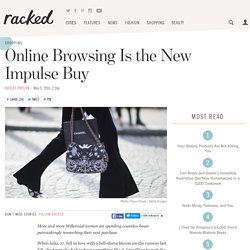 Why Fashion Is A Feminist Issue. Photographed by Victoria Adamson We’ve lost control of fashion. 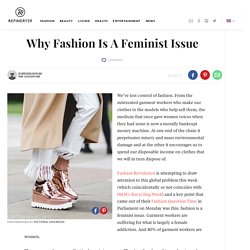 From the mistreated garment workers who make our clothes to the models who help sell them, the medium that once gave women voices when they had none is now a morally bankrupt money machine. At one end of the chain it perpetuates misery and mass environmental damage and at the other it encourages us to spend our disposable income on clothes that we will in turn dispose of. Fashion Revolution is attempting to draw attention to this global problem this week (which coincidentally or not coincides with H&M’s Recycling Week) and a key point that came out of their Fashion Question Time in Parliament on Monday was this: fashion is a feminist issue.

Plus-Size Models Proudly Wear Lingerie for 'Plus is Equal' Movement. Fashion makes an exhibition of itself to pull in the public. At this month’s London fashion week, the brightest and the best of British designers have made room for visitors from all over the world. 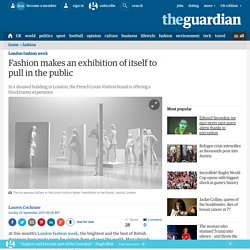 Mega-brands continue to flock to the capital for its cool factor. Versus, the younger line of Versace, brought a typical splash of glamour showing the spring/summer 2016 collection. Louis Vuitton, the storied Parisian fashion house, has made a more permanent move. This weekend has seen the brand launch a free exhibition in central London, with the aim of bringing the environment of a fashion show to the public. It is open to visitors from tomorrow for a month’s run, after a lavish private view for the fashion crowd .

Mulberry director Roger Mather sells shares on way to exit. The outgoing finance director at Mulberry, Roger Mather, has sold a chunk of shares in the luxury handbag maker, calling into question his faith in its tentative recovery. 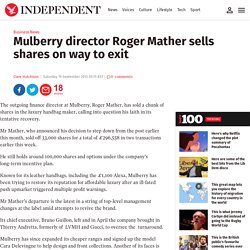 Mr Mather, who announced his decision to step down from the post earlier this month, sold off 33,000 shares for a total of £296,558 in two transactions earlier this week. He still holds around 100,000 shares and options under the company’s long-term incentive plan. Known for its leather handbags, including the £1,100 Alexa, Mulberry has been trying to restore its reputation for affordable luxury after an ill-fated push upmarket triggered multiple profit warnings. Mr Mather’s departure is the latest in a string of top-level management changes at the label amid attempts to revive the brand. Fashion's luxury brands are trying their luck in smaller British cities in a bid to boost sales - Business Analysis & Features - Business.

Apple embraces its future as a very expensive luxury brand. Apple products were always high end, but now they're shooting for being downright rich. 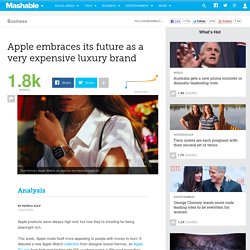 This week, Apple made itself more appealing to people with money to burn. It debuted a new Apple Watch collection from designer brand Hermes, an Apple TV app from high-end fashion site Gilt — where some outfits cost more than $1,000 each — and rose gold iPhones. The mass-appeal, cheaper iPhone 5C was quietly shelved. Apple was putting on the ritz. Given its heavy focus on design, this isn't surprising. Alta Moda’s Luxurious Fashion Show - The New Yorker. Four days will quickly steep themselves in night;Four nights will quickly dream away the time. 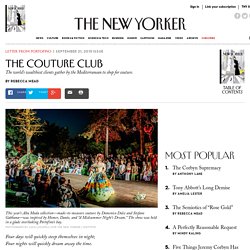 Stefano Gabbana, the fashion designer, leaned on the railing of his yacht, the Regina d’Italia, and smiled. His neighbors in the Portofino marina were enjoying an early-evening aperitivo on the deck of the Ester III—an enormous vessel, with a helipad on top and a transparent-frame swimming pool on the lower deck, that had drawn admiring stares from pedestrians on the quay all afternoon. The neighbors waved; he waved back. Behind the curve, the closed world of haute couture calls in the geeks. Designers will unveil their collections for spring 2016 on the catwalks of New York this week, followed by London, Milan and then Paris, where the twice-yearly fashion circus concludes in a month’s time. 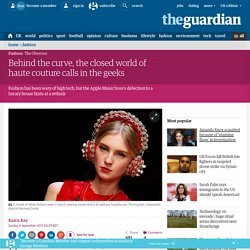 The intense schedule of presentations, many costing well into seven figures, has been established for decades. It has traditionally been a closed shop; an exclusive, invitation-only cabaret for the style cognoscenti. But things are changing, and some industry insiders are now predicting the demise of this exhausting and indulgent showcase of designer theatrics as its relevance in an era of fashion democracy, instant gratification and tech innovation is questioned. The fashion formula has, frankly, become tired, and the industry is starting to lag behind others in its lack of creative vision. Super furry Gucci loafers: why these daft shoes are autumn’s defining item.

You will have noticed that the fashion industry has started its new term. 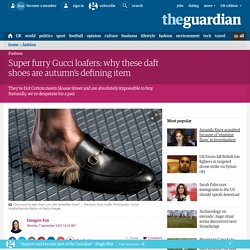 The glossy mags are spewing out trend reports left and right, and there are apparently 158 ways to wear a coat and about 732 must-haves this season. We’ve chipped in with our own rather excellent synopsis, too. Givenchy NYFW Public Fashion Show. Photo: REX Shutterstock. 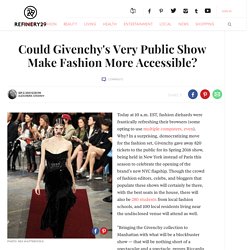 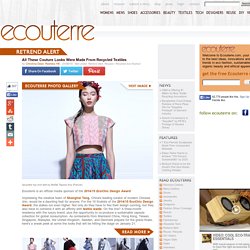 For the 10 finalists of the 2014/15 EcoChic Design Award, the stakes run even higher. Timberland, Pharrell Create Bee-Inspired Boots With Organic Cotton, Recycled Plastic Bottles. Shoe enthusiasts have something to buzz about. Timberland has teamed up with music mogul Pharrell Williams to create a pair of boots inspired by nature—bees, to be exact.

Luxury fashion embraces 'ethical values' and 'sustainability' Few things can bring on dismissive eye-rolling in a sophisticated consumer like a luxury-goods giant talking about social responsibility and sustainable production. Inevitably, suspicions of ‘greenwashing’ and token gestures are quick to surface. Yet something of substance does seem to be happening. As luxury goes digital, 'diffusion' brands become obsolete. The diffusion brand, as it has existed for the past few decades, feels ancient in the modern fashion industry. In fashion, the term “diffusion brand” means a secondary line by a well-known designer. (Think Marc by Marc Jacobs, CK by Calvin Klein.) They are intended to reach a younger, aspirational demographic with lower price points and edgier items — all while generating extra revenue.

Diffusion brands had their heyday in the 1990s and early 2000s, but since then, the industry has changed. Today’s consumers are shopping and researching across brick-and-mortar, online and mobile channels, and legacy fashion houses have been slow to realign their resources accordingly. Advertisement. Ralph Lauren's Biometric-Sensing "PoloTech" Shirt Now on Sale.

(Photo/CFP) Many global high-end fashion brands are still hesitant to fully embrace e-commerce despite consumers all over the world showing interest in buying goods online, according to the website of Shanghai's China Business News. Many global luxury brands believe that high-end fashion should have its own unique sales strategies and that embracing the e-commerce would disrupt industry marketing models, the report said. Luxury brands consider that embracing e-commerce channels would unsettle production and sales schedules, said the report. Stocking online stores would would pressure on limited supplies and revenue cycles could become altered from the steady growth associated with these brands to more erratic patterns throughout the year. Online shipping also posses security risks, as the products are vulnerable en route and could be swapped and sold illegally while customers end up with counterfeit merchandise, said the report.

Accessible luxury: Brands may be devaluing 'luxury' – but they’re making a mint - Features - Fashion - The Independent. What China's currency devaluation means for luxury fashion brands. Why Has Apple Been Poaching Fashion Execs? SAN FRANCISCO, United States — Apple has long applied the rules of fashion to the design and marketing of its popular iPod, iPhone and iPad devices, desirable not only for their functionality, but for their slick aesthetics and symbolic value, differentiating Apple users from others and signalling their affiliation with specific social tribes.