Top 10 worst Apple products of all time - Phone News. If you're the kind of person who thinks that Apple can do no wrong, and that anyone who points out that the emperor occasionally has no clothes is a filthy disciple of Bill Gates in the pay of the Wintel conspiracy then stop reading right now. 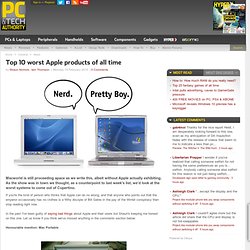 In the past I've been guilty of saying bad things about Apple and their users but Shaun's keeping me honest on this one. Let us know if you think we've missed anything in the comments section below. Honourable mention: Mac Portable Iain Thomson: OK, we can all have a giggle at 'portable' computers from the early days of computing but at nearly 16 pounds the Mac Portable really was taking the piss.

It was four inches thick, bulky enough to be awkward to carry and had a screen that was unreadable half the time, with the original models. The Mac Portable also had a novel problem when it came to power. The two systems were night and day: the portable was big. Nike Rebounds: How (and Why) Nike Recovered from Its Supply Chain Disaster. "I thought we weren’t going to talk about i2," growls Roland Wolfram, Nike’s vice president of global operations and technology, his eyes flashing at his PR manager with ill-concealed ire. 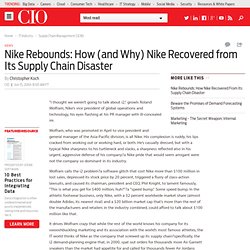 Wolfram, who was promoted in April to vice president and general manager of the Asia-Pacific division, is all Nike. 10 Famous ERP Disasters, Dustups and Disappointments. The world of enterprise applications (ERP, CRM, BI and supply chain apps) may seem boring to those caught up in the hysteria over Twitter and iPhone applications, but there's plenty of drama to be found (even more than on an episode of "The Bachelor"): Troubled multimillion-dollar software deals that produce spectacular failures and huge spending nightmares; vendor marketing bravado that breeds cut-throat competition and contempt; and embarrassing and costly lawsuits over botched implementations and intellectual property breaches. 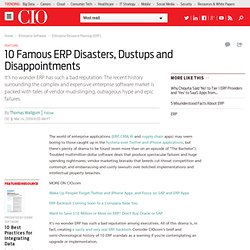 MORE ON CIO.com Wake Up People! Forget Twitter and iPhone Apps, and Focus on SAP and ERP Apps ERP Backlash Coming Soon to a Company Near You. 10 Famous ERP Disasters, Dustups and Disappointments. The world of enterprise applications ( ERP, CRM, BI and supply chain apps) may seem boring to those caught up in the hysteria over Twitter and iPhone applications, but there's plenty of drama to be found (even more than on an episode of "The Bachelor"): Troubled multimillion-dollar software deals that produce spectacular failures and huge spending nightmares; vendor marketing bravado that breeds cut-throat competition and contempt; and embarrassing and costly lawsuits over botched implementations and intellectual property breaches. 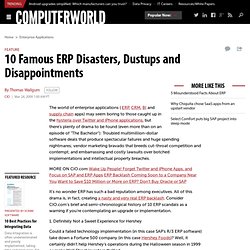 MORE ON CIO.com Wake Up People! Forget Twitter and iPhone Apps, and Focus on SAP and ERP Apps ERP Backlash Coming Soon to a Company Near You Want to Save $10 Million or More on ERP? Don't Buy Oracle or SAP. IT's biggest project failures. Every year, the Improbable Research organization hands out Ig Nobel prizes to research projects that "first make people laugh, and then make them think. 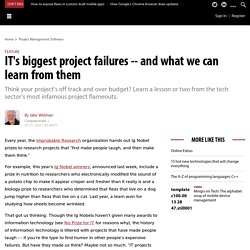 " For example, this year's Ig Nobel winners, announced last week, include a prize in nutrition to researchers who electronically modified the sound of a potato chip to make it appear crisper and fresher than it really is and a biology prize to researchers who determined that fleas that live on a dog jump higher than fleas that live on a cat. Last year, a team won for studying how sheets become wrinkled. Why was the Zune brand so hated? History has not been kind to Microsoft's Zune. 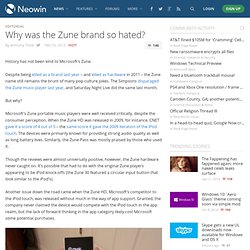 Despite being killed as a brand last year – and killed as hardware in 2011 – the Zune name still remains the brunt of many pop-culture jokes. The Simpsons disparaged the Zune music player last year, and Saturday Night Live did the same last month. Mfrtech - How the Air Force Could Have Prevented its $1 Billion ERP Disaster. About a month ago, an article titled “Air Force scraps massive ERP project after racking up $1 billion in costs” caught my attention. 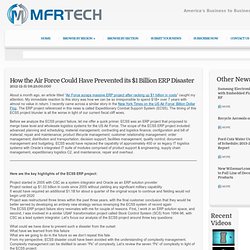 My immediate reaction to this story was how we can be so irresponsible to spend $1B+ over 7 years with almost no value in return. I recently came across a similar story in the New York Times on the US Air Force’ Billion Dollar Flop. The ERP project referenced in this news is called Expeditionary Combat Support System (ECSS). The timing of this ECSS project blunder is all the worse in light of our current fiscal cliff woes. 10 Great Companies That Lost Their Edge.

The Executive Briefing Center at Dell in Round Rock, Texas. 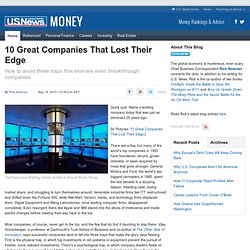 Quick quiz: Name a leading company today that was just as dominant 25 years ago. [In Pictures: 10 Great Companies That Lost Their Edge.] There are a few, but many of the world's top companies in 1985 have foundered, shrunk, grown obsolete, or been acquired by rivals that grew stronger. General Motors and Ford, the world's two biggest carmakers in 1985, spent the last decade in a dizzying tailspin, bleeding cash, losing market share, and struggling to turn themselves around. Project management 'failure' behind absence of Apple Maps updates at WWDC - report. By Sam Oliver A number of improvements to Apple's mapping service that were slated to hit the stage at last week's Worldwide Developers Conference did not appear after poor planning and "internal politics" caused deadlines to be missed, a new report alleges. 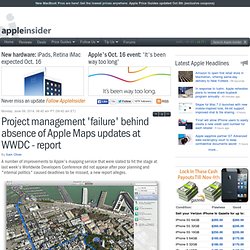 Apple Maps as seen in OS X Mavericks. BlackBerry Q10 cited to be a commercial failure by retailers. Phones with QWERTY keyboards have always been the strong suite of BlackBerry. 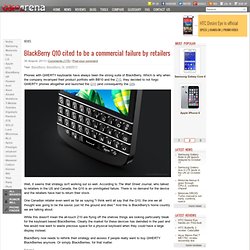 10 Famous ERP Disasters, Dustups and Disappointments. Why BlackBerry failed. "A tech giant rises – another falls," said the front-page headline on the Financial Times. Boeing conducts further 787 Dreamliner tests after battery failures - Aerospace Technology. Boeing has conducted the second test flight of a 787 Dreamliner in Seattle, US, as part of its ongoing efforts to investigate the reason behind recent battery failures. The Chicago-based aeroplane manufacturer stated that the test flight on ZA005, a Boeing 787 test plane, lasted one hour and 29 minutes on 11 February and was uneventful. No further test flights are currently planned, Boeing added. On 9 February, the company flew the first 787 test flight for two hours and 19 minutes after receiving approval from the US Federal Aviation Administration (FAA).

Why HP's TouchPad Tablet Strategy Failed - Hewlett Packard news from Channel Insider. HP (NYSE:HPQ) didn't always think webOS and TouchPad was doomed. It was only 16 months ago that HP proudly announced plans to buy Palm for $1.2 billion and use its webOS as the basis for a new line of business. "Palm's innovative operating system provides an ideal platform to expand HP's mobility strategy and create a unique HP experience spanning multiple mobile connected devices," said Todd Bradley, executive vice president, Personal Systems Group of HP, in a statement released back then.

"And, Palm possesses significant IP assets and has a highly skilled team. The smartphone market is large, profitable and rapidly growing, and companies that can provide an integrated device and experience command a higher share. Advances in mobility are offering significant opportunities, and HP intends to be a leader in this market. " Classic Mistakes – Why Projects Fail. Analysis of the examples in the “Catalogue of catastrophe” reveals the most common mistakes. Given the frequency of occurrence, these mistakes can be considered the “classic mistakes”.

The following list outlines the most common themes and provides links to examples; Tech Failures: The 10 Biggest Over The Last 10 Years. The blog 24/7 Wall St. has created a list of the 10 biggest failures in the technology sector over the last decade. To make the list: -A product had to be widely available. -It had to be aimed at a global market.

-It had to be either equal or superior to its competitor in the tech space. -It had to have the potential to bring in billions of dollars in revenue. Apple’s Folly: The story of the Pippin game console. Lessons from a Billion-Dollar Project Failure. One billion dollars. Zero results. The Top 10 Failed NASA Missions. Verizon’s attempt to compete with Netflix ends in hilarious failure.