When baldy doesn’t want your tit: newborn breast refusal - Emma Pickett breastfeeding support. When Baby Does Not Yet Latch. Why Would A Baby Not Latch? 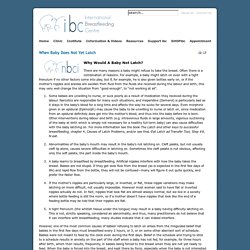 There are many reasons a baby might refuse to take the breast. Often there is a combination of reasons. For example, a baby might latch on even with a tight frenulum if no other factors come into play, but if, for example, he is also given bottles early on, or if the mother’s nipples and areolas are swollen from fluid from the fluids she received during the labour and birth, this may very well change the situation from “good enough”, to “not working at all”.

Some babies are unwilling to nurse, or suck poorly as a result of medication they received during the labour. Narcotics are responsible for many such situations, and meperidine (Demerol) is particularly bad as it stays in the baby’s blood for a long time and affects the way he sucks for several days. There is no evidence that a healthy full term newborn must feed every three hours (or two hours, or whatever) during the first few days. But The Baby Is Not Latching On! Okay, so how long can we wait? The Alpha Parent: Timeline of a Breastfed Baby. All babies reach milestones on their own developmental timeline. 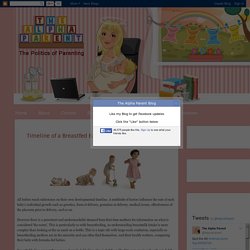 A multitude of factors influence the rate of each baby’s individual growth such as genetics, form of delivery, gestation at delivery, medical issues, effectiveness of the placenta prior to delivery, and so on. However there is a persistent and understandable demand from first-time mothers for information on what is considered ‘the norm’. This is particularly so with breastfeeding, as understanding breastmilk intake is more complex than looking at the oz mark on a bottle. This is a topic rife with large-scale confusion, especially as breastfeeding mothers are in the minority and can often find themselves, and their health workers, comparing their baby with formula-fed babies. Breastfed babies are not the same as formula fed babies. What follows is a timeline detailing the journey of the average breastfed baby. At Birth: During your baby's first 24 hours, he might wet his nappy only once or twice (Fredregill 2004). 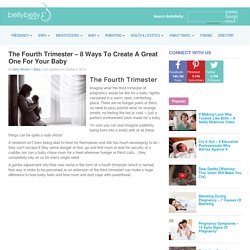 There are no hunger pains or thirst, no need to pass painful wind, no strange smells, no feeling the hot or cold — just a perfect environment tailor made for a baby. I’m sure you can also imagine suddenly being born into a world with of all these things can be quite a rude shock! A newborn isn’t born being able to fend for themselves and still has much developing to do – they can’t escape if they sense danger or fear, go and find mum or dad for security or a cuddle, nor can a baby chase mum for a feed whenever hunger or thirst calls… they completely rely on us for every single need.

A gentle adjustment into their new world in the form of a fourth trimester (which is named that way in order to be perceived as an extension of the third trimester) can make a huge difference to how baby feels and how mum and dad cope with parenthood. Sarah Ockwell-Smith. Breastfeeding your newborn — what to expect in the early weeks. By Kelly Bonyata, BS, IBCLC Image credit: jcgoforth on flickr The First Week How often should baby be nursing? 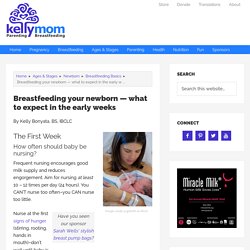 Frequent nursing encourages good milk supply and reduces engorgement. Aim for nursing at least 10 – 12 times per day (24 hours). Nurse at the first signs of hunger (stirring, rooting, hands in mouth)–don’t wait until baby is crying. Is baby getting enough milk? Weight gain: Normal newborns may lose up to 7% of birth weight in the first few days. Dirty diapers: In the early days, baby typically has one dirty diaper for each day of life (1 on day one, 2 on day two…).

Wet diapers: In the early days, baby typically has one wet diaper for each day of life (1 on day one, 2 on day two…). Breast changes Your milk should start to “come in” (increase in quantity and change from colostrum to mature milk) between days 2 and 5. Weeks two through six Frequent nursing in the early weeks is important for establishing a good milk supply.

The following things are normal: