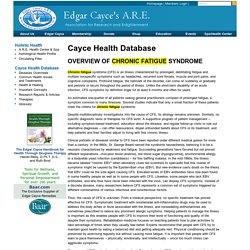 Profound fatigue, the hallmark of the disorder, can come on suddenly or gradually and persists or recurs throughout the period of illness. Unlike the short-term disability of an acute infection, CFS symptoms by definition linger for at least 6 months and often for years. An estimated one-quarter of all patients seeing general practitioners complain of prolonged fatigue, a symptom common to many illnesses. Several studies indicate that only a small fraction of these patients meet the criteria for chronic fatigue syndrome. Despite multidisciplinary investigations into the cause of CFS, its etiology remains unknown. Clinical portraits of diseases similar to CFS have been reported under different medical guises for more than a century.

Thus, the cause of CFS is unknown. ME Association. Article index > Effects> Prognosis> Treatment> Controversy> The Role of the ME Association It should be explained that there are a number of different names for what is an illness of uncertain cause affecting many thousands of people. 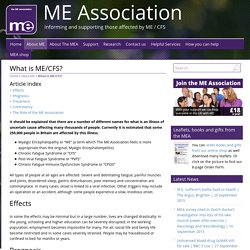 Currently it is estimated that some 250,000 people in Britain are affected by this illness. Myalgic Encephalopathy or “ME” (a term which The ME Association feels is more appropriate than the original, Myalgic Encephalomyelitis)Chronic Fatigue Syndrome or “CFS”Post-Viral Fatigue Syndrome or “PVFS”Chronic Fatigue Immune Dysfunction Syndrome or “CFIDS” All types of people at all ages are affected. Effects In some the effects may be minimal but in a large number, lives are changed drastically: in the young, schooling and higher education can be severely disrupted; in the working population, employment becomes impossible for many. 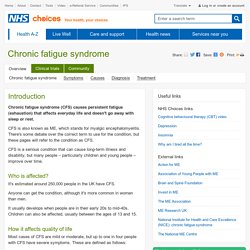 CFS is also known as ME, which stands for myalgic encephalomyelitis. There's some debate over the correct term to use for the condition, but these pages will refer to the condition as CFS. CFS is a serious condition that can cause long-term illness and disability, but many people – particularly children and young people – improve over time. Who is affected? It's estimated around 250,000 people in the UK have CFS. Anyone can get the condition, although it's more common in women than men. It usually develops when people are in their early 20s to mid-40s. Fatigue and neurological conditions. Many people with a neurological condition experience feelings of fatigue. 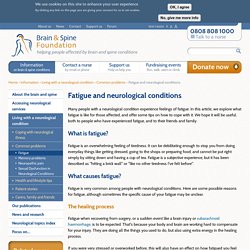 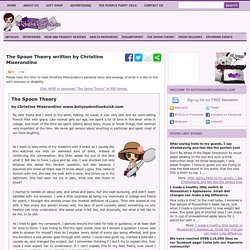 As usual, it was very late and we were eating French fries with gravy. Like normal girls our age, we spent a lot of time in the diner while in college, and most of the time we spent talking about boys, music or trivial things, that seemed very important at the time. We never got serious about anything in particular and spent most of our time laughing. As I went to take some of my medicine with a snack as I usually did, she watched me with an awkward kind of stare, instead of continuing the conversation. I started to ramble on about pills, and aches and pains, but she kept pursuing, and didn’t seem satisfied with my answers. As I tried to gain my composure, I glanced around the table for help or guidance, or at least stall for time to think. International ME/CFS and FM Awareness Day is May 12: The World Will Know. 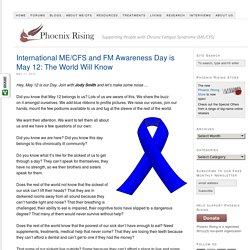 Join with Jody Smith and let’s make some noise … Did you know that May 12 belongs to us? Lots of us are aware of this. We share the buzz on it amongst ourselves. We add blue ribbons to profile pictures. We want their attention. Did you know we are here? Do you know what it’s like for the sickest of us to get through a day? Does the rest of the world not know that the sickest of our sick can’t lift their heads?

Does the rest of the world know that the poorest of our sick don’t have enough to eat? That some of our sickest live outside? Our goal is to make these shocking facts known to as many people as we can reach. Most of the world doesn’t know any of this. But they will. I had never heard that May 12 was our day until six years ago when I came back online after many years of sickness-induced absence. I learned then that Thomas Hennessey had kicked off this May 12 thing the same year I had gotten sick, in 1992. Is it a drop in the bucket?