Down the Rabbit Hole

Saturn in Scorpio. Saturn, the planet of hard, cold reality, is retrograding back into Scorpio on June 14, 2015. 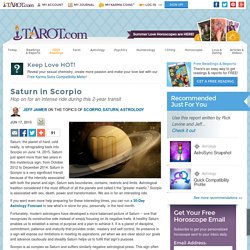 Saturn just spent more than two years in this mysterious sign, from October 2012 to December 2014. Saturn in Scorpio is a very significant transit because of the intensity associated with both the planet and sign. Saturn sets boundaries, contains, restricts and limits. Astrological tradition considered it the most difficult of all the planets and called it the "greater malefic. " Scorpio is associated with sex, death, power and transformation. If you want even more help preparing for these interesting times, you can run a 30-Day Astrology Forecast to see what's in store for you, personally, in the next month. Fortunately, modern astrologers have developed a more balanced picture of Saturn -- one that recognizes its constructive side instead of simply focusing on its negative traits. 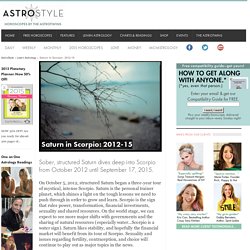 Saturn is the personal trainer planet, which shines a light on the tough lessons we need to push through in order to grow and learn. Scorpio is the sign that rules power, transformation, financial investments, sexuality and shared resources. Saturn in Scorpio—Your Guide through the Dark. Donna says: Mandi Lockley has written a timely and useful guide for those who will be affected by Saturn’s transit through Scorpio. 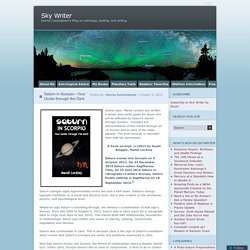 Included are interpretations of this transit through all 12 houses and to each of the natal planets. This brief excerpt is reprinted here with her permission. A book excerpt, (c)2012 by Guest Blogger, Mandi Lockley Saturn moves into Scorpio on 5 October 2012. On 23 December 2014 Saturn enters Sagittarius. Saturn changes signs approximately every two and a half years. Whatever sign Saturn is travelling through, we witness a crystallisation of that sign’s themes. 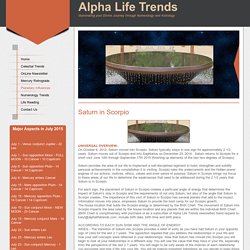 Saturn typically stays in one sign for approximately 2 1/2 years. Saturn moves out of Scorpio and into Sagittarius on December 23, 2014. Saturn returns to Scorpio for a short visit June 14th through September 17th 2015 (finishing up elements of the last two degrees of Scorpio). Return of Saturn in Scorpio June 14 – September 17, 2015. A cruel summer (or winter, for the southern hemisphere) is ahead of us as Saturn reenters the sign of Scorpio from Sunday, June 14 at 7:36 P.M. until Thursday, September 17 at 9:49 P.M. 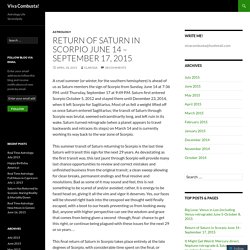 Saturn first entered Scorpio October 5, 2012 and stayed there until December 23, 2014, when it left Scorpio for Sagittarius. Most of us felt a weight lifted off us once Saturn entered Sagittarius; the transit of Saturn through Scorpio was brutal, seemed extraordinarily long, and left ruin in its wake. Saturn turned retrograde (when a planet appears to travel backwards and retraces its steps) on March 14 and is currently working its way back to the war zone of Scorpio. Ring of Fire. Ring of fire. Cinematic Enemas - Writing the Ring Of Fire - Raindance Toronto. If you've taken any scriptwriting classes or read any book about cinema creation, you will soon come across the idea that the script is the most important part of the process. 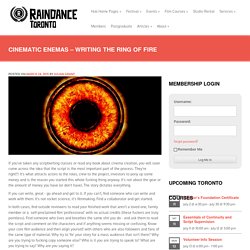 They're right!!! It's what attracts actors to the roles, crew to the project, investors to pony up some money and is the reason you started this whole fucking thing anyway. It's not about the gear or the amount of money you have (or don't have). The story dictates everything. If you can write, great - go ahead and get to it. In both cases, find outside reviewers to read your finished work that aren't a loved one, family member or a self-proclaimed film 'professional' with no actual credits (these fuckers are truly pointless). Houses of HH. Thaumaturgy and the Magic of Miracles. Thaumaturgy is an ancient concept which defines the capacity of a saint or a master to realize and manifest miracles. 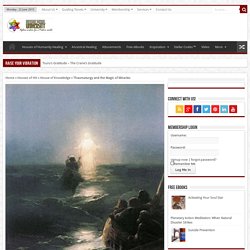 Thaumaturgy in theology is defined as the doctrine of miracles which inspired the particular branch of religion that deals with wonders and miracles. Thaumaturgy has some of its origins in the early practices of Hermetic alchemy and Theurgy. As an art, thaumaturgy is the ability to change the properties of ideas, ideals and situations. In the Hermetic Kabbalah, the mystical tradition, a person titled a “Magician” has the power to make subtle changes in higher realms, which in turn produce physical results. In real terms, a thaumaturge is someone that has the power of intercession and manifestation not only for the self but also for the benefit of others.

Thaumaturgy has its genesis on the Greek word for miracle; wonder. Wonderworker is a branch of magic, a magical art devoted to produce miracles. Lymphatic System - body, used, water, process, type, form, cells, cause, primary, part, Movement of lymph, Lymph nodes. Photo by: Matthew Cole The lymphatic system is a network of vessels that transports nutrients to the cells and collects their waste products. 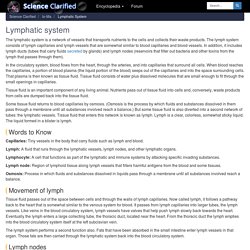 The lymph system consists of lymph capillaries and lymph vessels that are somewhat similar to blood capillaries and blood vessels. In addition, it includes lymph ducts (tubes that carry fluids secreted by glands) and lymph nodes (reservoirs that filter out bacteria and other toxins from the lymph that passes through them). Trace The Path of The Water From The Mouth to the Urethra: Human Anatomy - ichurya.ExpertsColumn.com. Path of water in the Digestive System Tracing the path of water from the mouth to urethra involves both the digestive and renal system. 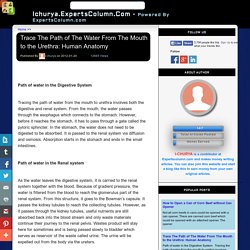 From the mouth, the water passes through the esophagus which connects to the stomach. However, before it reaches the stomach, it has to pass through a gate called the pyloric sphincter. In the stomach, the water does not need to be digested to be absorbed. It is passed to the renal system via diffusion and osmosis.

The Path of Blood through the Human Body. When a heart contracts and forces blood into the blood vessels, there is a certain path that the blood follows through the body. 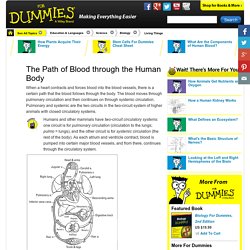 The blood moves through pulmonary circulation and then continues on through systemic circulation. Kundalini. Kundalini Kundalini is a Sanskrit word meaning either "coiled up" or "coiling like a snake. " There are a number of other translations of the term usually emphasizing a more serpent nature to the word - e.g. 'serpent power'. The caduceus symbol of coiling snakes is thought to be an ancient symbolic representation of Kundalini physiology. Kundalini. What Chinese Element Am I? Top left to right: metal, wood, earth, water, fire Source Anyone with an interest in Chinese astrology has surely asked themselves "What Chinese element am I?

" at some point in their life. Chinese astrology differs from Western astrology in the fact that there are five elements in the Chinese system, and they emphasize different positions in life rather than a specific set of characteristics. However, these elements can still indicate the characteristics a person bears and which traits someone from one element shares with others from the same element. What Are the Five Chinese Elements? Characteristics of the Fire Snake.

Characteristics of the Fire Snake: 1917, 1977 This type of Snake tends to be the most vigorous, sociable and lively out of all the other Snakes. They are go-getting, self-assured and are never slow in getting their opinions across. They have many great leadership qualities and can win the respect and support of all those around him with great ease. They usually have a good sense of humour which gains them a wide circle of friends and a very active social life.

They love to travel. The Snake is an extremely intelligent and active person. There will be many points in their life where they decide its time for a change and shed their old skin and take up a whole new range of activities or sometimes even a completely different area of work. Most Snakes are financially secure in later life as long as they do not gamble; this is due to the fact that the Snake is known as the worst gambler in the Chinese zodiac. Thoroughly. Thaumaturgy. "Miracle worker" redirects here. For the works about Helen Keller, see The Miracle Worker. Religious views[edit] Christianity[edit] In original Greek writings, the term thaumaturge referred to several Christian saints. This is usually translated into English as "wonderworker", a saint through whom God works miracles, not just occasionally, but as a matter of course.

You are here: Home / Health / The Truth About Estrogen And A Woman’s Body Our modern world is saturated with excess estrogens. 13 Estrogenic Ingredients in Consumer Products. Estrogen is a naturally occuring element, one that is needed by the human body for basic functions like reproduction. While small amounts are critical to healthy human development, too much estrogen has been linked with many health problems including premature breast development (or breast development in men), PMS, endometriosis, fibroids, cancer and pregnancy complications among many other issues scientists are just discovering.

For example, women undergoing estrogen-driven breast cancer are cautioned against eating foods containing Soy, but could the sources of estrogen in our environment have an even greater impact on our hormone health? Delivering The Groin Kick Of Common Sense: How Fake Estrogen Fools Your Body. What’s the Difference Between “Good” & “Bad” Estrogen? Two Food Additives Found to Have EstrogenLike Effects. Fake Estrogen – a modern health epidemic. The Hormone Reset Diet on The Health Bridge. Dr. Yu's 10-Second Hormone Test.

No Place Like Home GPS shoes by Dominic Wilcox. Wizard of Oz-inspired gadget proves there's no place like home. Baffling Butterfly-Shaped Cloud Turns Out To Be... A Huge Swarm Of Actual Butterflies. How To Chant the Gayatri Mantra. Mithraism and Christianity. Zeitgeist. “Hope is a thing with feathers” — Emily Dickinson. Latin proverbs and locutions. [current-page:page-title] Grail Lore in the Isle of Avalon by Kathy Doore. Rabbit Hole. Reweaving the Web of Life: An Interview with Carol Brouillet. Imagination, Imaginal Cells, and Evolutionary Leaps. The Spider Goddess & The Web She Weaves. The Writing Spider (Argiope aurantia) What's In Your Web? Animal Symbolism Series—Spider. Energies of Today: Expanding Your Sacred Spiral. The Meaning of Sacred Geometry Part 2. What's The Point?