How Do You Save a Dying Language? Crowdsource It - Education. Websites have already tackled language education, but it's not that easy to learn Navajo or Lakota from places like Wikiversity or the Rosetta Project. 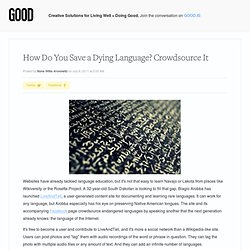 A 32-year-old South Dakotan is looking to fill that gap. Biagio Arobba has launched LiveAndTell, a user-generated content site for documenting and learning rare languages. It can work for any language, but Arobba especially has his eye on preserving Native American tongues. The site and its accompanying Facebook page crowdsource endangered languages by speaking another that the next generation already knows: the language of the Internet. It's free to become a user and contribute to LiveAndTell, and it's more a social network than a Wikipedia-like site. Fast Company points out that out of 175 Native American languages still being spoken, only about 20 are taught to children. Photo (cc) by Flickr user skene. Is English or Mandarin the language of the future? 22 February 2012Last updated at 01:03 By Jennifer Pak BBC News, Kuala Lumpur English has been the dominant global language for a century, but is it the language of the future? 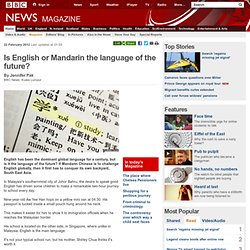 If Mandarin Chinese is to challenge English globally, then it first has to conquer its own backyard, South East Asia. In Malaysia's southernmost city of Johor Bahru, the desire to speak good English has driven some children to make a remarkable two-hour journey to school every day. Nine-year-old Aw Yee Han hops on a yellow mini van at 04:30. His passport is tucked inside a small pouch hung around his neck. This makes it easier for him to show it to immigration officials when he reaches the Malaysian border. His school is located on the other side, in Singapore, where unlike in Malaysia, English is the main language. It's not your typical school run, but his mother, Shirley Chua thinks it's worth it. "Science and maths are all written in English so it's essential for my son to be fluent in the language," she says.

After Brexit, EU English will be free to morph into a distinct variety. If your planification isn’t up to snuff, you might need to precise your actorness. 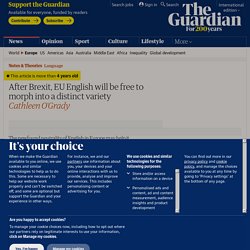 English in the EU, spoken primarily by non-native speakers, has taken on a life of its own. While “planification” might be jargon unlikely to pop up outside of Brussels, there are also changes afoot in more everyday spoken English in Europe. You might hear a mobile phone referred to as a “Handy”, and be asked to SMS, not text, your friend. “Actorness” and a multitude of other examples are listed in “Misused English words and expressions in EU publications”, a guide published by European Court of Auditors senior translator Jeremy Gardner. The guide details many of the ways in which European English has gone a bit wibbly – to a native speaker’s ear, at least. Following Brexit, the UK will no longer be able to call these kinds of shots.

The dominance of English as a lingua franca in Europe is startling. However, Modiano argues that Brexit will give English a surprise boost, by making it the neutral option. Italian anger over English-language slogans used to promote Rome and country’s navy. World Englishes: 30 countries with a million English speakers. The creole continuum. The much-loved “jive talk” scene from the comedy film Airplane! 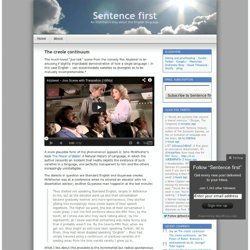 Is an amusing if slightly improbable demonstration of how a single language – in this case English – can accommodate varieties so divergent as to be mutually incomprehensible.* A more plausible form of the phenomenon appears in John McWhorter’s book The Power of Babel : A Natural History of Language , in which the author recounts an incident that neatly depicts the existence of such varieties in a language, one perfectly transparent to him and the others increasingly unintelligible. The dialects in question are Standard English and Guyanese creoles.

They started out speaking Standard English, largely in deference to me, but as the elevator went up and their conversation became gradually warmer and more spontaneous, they started gliding into increasingly more creole layers of their speech repertoire. . * Sometimes this communicative shortfall hinges on a single word, as in the famous case of William Caxton’s egges / eyren .