Average Cost of a Geothermal Heat Pump Installation. If you're thinking about installing a geothermal system, the initial cost is certainly one of the factors that plays a role in the decision-making process. 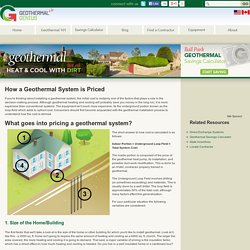 Although geothermal heating and cooling will probably save you money in the long run, it is more expensive than conventional systems. The equipment isn't much more expensive, its the underground portion known as the loop-field which adds to upfront cost. Consumers should first become acquainted with the geothermal installation process to understand how the cost is derived. The short answer to how cost is calculated is as follows: Indoor Portion + Underground Loop Field = Total System Cost. 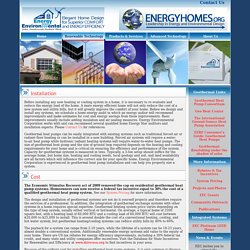 Homeowners can now receive a federal tax incentive equal to 30% the cost of a qualified geothermal heat pump system. See our System Pricing for more information. The design and installation of geothermal systems are not do it yourself projects and therefore require the services of a professional. In addition, the integration of geothermal exchange systems with other systems in a home requires special expertise. Geothermal heating system price varies depending on the type of loop system, usually either vertical or horizontal.

The payback for a system can range from 2-10 years, while the lifetime of a system can be 18-23 years, almost double a conventional system. Because of the upfront cost for installing geothermal heat pump systems, it is very common to finance these systems. Back to: Unlocking the Gigawatts of Geothermal Power in Kenya. Environmental Impacts of Geothermal Energy. The most widely developed type of geothermal power plant (known as hydrothermal plants) are located near geologic “hot spots” where hot molten rock is close to the earth’s crust and produces hot water. 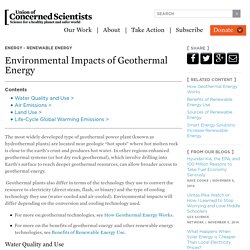 In other regions enhanced geothermal systems (or hot dry rock geothermal), which involve drilling into Earth’s surface to reach deeper geothermal resources, can allow broader access to geothermal energy. Geothermal plants also differ in terms of the technology they use to convert the resource to electricity (direct steam, flash, or binary) and the type of cooling technology they use (water-cooled and air-cooled). A Student's Guide to Global Climate Change. If you were to dig a big hole straight down into the Earth, you would notice the temperature getting warmer the deeper you go. 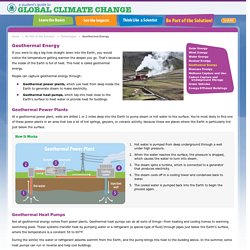 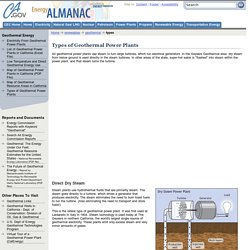 In the Geysers Geothermal area, dry steam from below ground is used directly in the steam turbines. In other areas of the state, super-hot water is "flashed" into steam within the power plant, and that steam turns the turbine. Direct Dry Steam Steam plants use hydrothermal fluids that are primarily steam. The steam goes directly to a turbine, which drives a generator that produces electricity. Geothermal Energy: Geothermal Electricity Production. Geothermal Electricity Production This geothermal power plant generates electricity for the Imperial Valley in California. 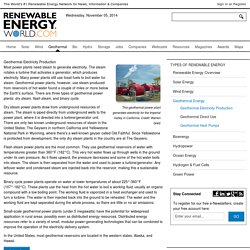 Credit: Warren Gretz Most power plants need steam to generate electricity. The steam rotates a turbine that activates a generator, which produces electricity. Many power plants still use fossil fuels to boil water for steam. Geothermal Energy Technology. Geothermal energy is a consistent and reliable resource that is ideal for replacing baseload power sources such as polluting coal plants. 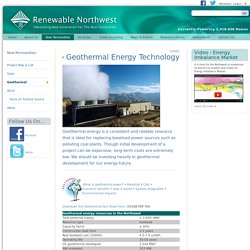 Though initial development of a project can be expensive, long-term costs are extremely low. Geothermal Basics - Economic Benifits. Geothermal energy provides long-term answers to some of the most pressing issues in today’s economy. 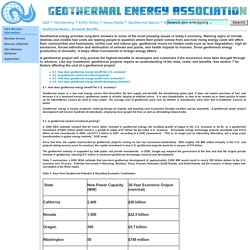 Warning signs of climate distress and volatile fuel costs are leading people to question where their power comes from and how rising energy costs will affect their communities and businesses. Unlike coal and natural gas, geothermal incurs no hidden costs such as land degradation, high air emissions, forced extinction and destruction of animals and plants, and health impacts to humans. Since geothermal energy production is domestic, it helps offset involvement in foreign energy affairs. A geothermal project will only provide the highest benefits to developers and customers if the economics have been thought through in advance. Like any investment, geothermal projects require an understanding of the risks, costs, and benefits. Energy Source Comparison. Geothermal FAQs. How Geothermal Energy Works. Heat from the earth can be used as an energy source in many ways, from large and complex power stations to small and relatively simple pumping systems. 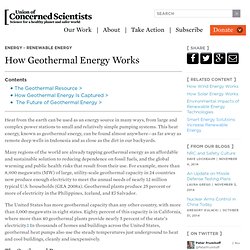 This heat energy, known as geothermal energy, can be found almost anywhere—as far away as remote deep wells in Indonesia and as close as the dirt in our backyards. Many regions of the world are already tapping geothermal energy as an affordable and sustainable solution to reducing dependence on fossil fuels, and the global warming and public health risks that result from their use. For example, more than 8,900 megawatts (MW) of large, utility-scale geothermal capacity in 24 countries now produce enough electricity to meet the annual needs of nearly 12 million typical U.S. households (GEA 2008a). Geothermal plants produce 25 percent or more of electricity in the Philippines, Iceland, and El Salvador. The United States has more geothermal capacity than any other country, with more than 3,000 megawatts in eight states. 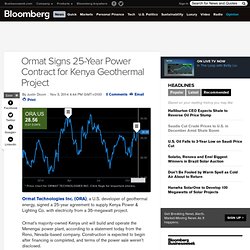 (ORA), a U.S. developer of geothermal energy, signed a 25-year agreement to supply Kenya Power & Lighting Co. with electricity from a 35-megawatt project. Ormat’s majority-owned Kenya unit will build and operate the Menengai power plant, according to a statement today from the Reno, Nevada-based company. Construction is expected to begin after financing is completed, and terms of the power sale weren’t disclosed. Geothermal Energy: Pros and Cons. There is no perfect energy source. Each and every one has its own advantages and compromises. This series will explore the pros and cons of various energy sources. Learn about other forms of energy generation here.

The core of the Earth, some 4,000 miles beneath its surface, is a fiery morass of superheated gas and molten rock which exists at roughly 7200 degrees Fahrenheit. That temperature is maintained by the decay of radioactive particles located within the Earth’s core. Moving away from the core, the temperature cools down to the point where it might be 1500 degrees, fifty miles down and 3-400 degrees, three to four miles below the surface. Geothermal Energy. Geothermal Energy The Earth's heat-called geothermal energy-escapes as steam at a hot springs in Nevada.