YouTube Goes to College. In 1995, University of California—Berkeley computer science professor Lawrence Rowe began recording lectures and posting them as webcasts on the school's intranet for his students to view at their leisure outside of the classroom. 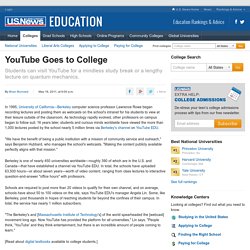 As technology rapidly evolved, other professors on campus began to follow suit; 16 years later, students and curious minds worldwide have viewed the more than 1,000 lectures posted by the school nearly 5 million times via Berkeley's channel on YouTube EDU. "We have the benefit of being a public institution with a mission of community service and outreach," says Benjamin Hubbard, who manages the school's webcasts.

"Making the content publicly available perfectly aligns with that mission. " Berkeley is one of nearly 450 universities worldwide—roughly 390 of which are in the U.S. and Canada—that have established a channel via YouTube EDU. "The Berkeley's and [Massachusetts Institute of Technology's] of the world spearheaded the [webcast] movement long ago. 5 Ways Technology Will Impact Higher Ed in 2013. 10472.pdf. Colleges use technology to promote student success. ​Denise Swett, vice president for student services at Foothill College in California, didn’t start out as a technology expert, but that’s the direction she’s taken as she and her colleagues discovered technology offers the best ways to inform and engage students. 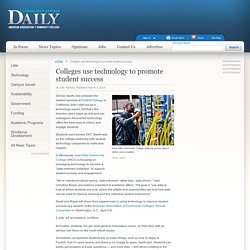 Students want access 24/7, Swett said, so the college partnered with several technology companies to make that happen. In Minnesota, Inver Hills Community College (IHCC) is focusing on leveraging technology to become a “data-informed institution” to support student success and engagement. “We’re intentional about saying ‘data-informed’ rather than ‘data-driven,'” said Christina Royal, provost/vice president of academic affairs. The goal is “use data to look at where students are now, where the pitfalls and opportunities are and how data can be used to improve learning and the collective student experience.”

Lots of answers online Phone and email inquiries dropped by 54 percent after students started using Ask Foothill, Swett said. Colleges see the future in technology. Coastline Community College was a higher-education pioneer in the late 1970s when it started developing television-based courses that students could take from anywhere as long as they had another innovation of the time, a video player. 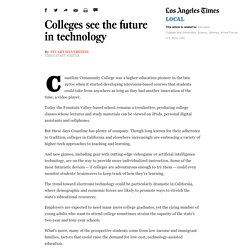 Today the Fountain Valley-based school remains a trendsetter, producing college classes whose lectures and study materials can be viewed on iPods, personal digital assistants and cellphones. But these days Coastline has plenty of company. Though long known for their adherence to tradition, colleges in California and elsewhere increasingly are embracing a variety of higher-tech approaches to teaching and learning.

And new gizmos, including gear with cutting-edge videogame or artificial intelligence technology, are on the way to provide more individualized instruction. Some of the most futuristic devices -- if colleges are adventurous enough to try them -- could even monitor students' brainwaves to keep track of how they're learning. Technology and the College Generation. Photo As a professor who favors pop quizzes, Cedrick May is used to grimaces from students caught unprepared. 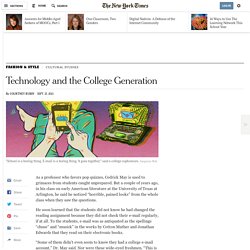 But a couple of years ago, in his class on early American literature at the University of Texas at Arlington, he said he noticed “horrible, pained looks” from the whole class when they saw the questions. He soon learned that the students did not know he had changed the reading assignment because they did not check their e-mail regularly, if at all. To the students, e-mail was as antiquated as the spellings “chuse” and “musick” in the works by Cotton Mather and Jonathan Edwards that they read on their electronic books. “Some of them didn’t even seem to know they had a college e-mail account,” Dr. That is when he added to his course syllabuses: “Students must check e-mail daily.”

So students prefer social media. How to get students, some of whom consider their school e-mail accounts so irrelevant that they give their parents the passwords, to take a look? In an e-mail, Dr. Ms. Mr. Colleges Sharpen the Educational Experience with Classroom Technology. Colleges and universities understand that technology generates excitement among students and faculty and can ­significantly improve teaching and learning on ­campus. 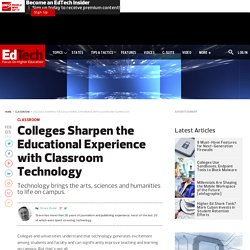 But that's not all. Aric Huang, Theresa Eggleston and Mike Rocke are transforming the anatomy labs at the Southern California University of Health Sciences Photo: Thomas Alleman While technology tends to represent change, that change is often for the better, says Theresa Eggleston, executive director of information technology at the Southern California University of Health Sciences (SCU) in Whittier, Calif. Until a year ago, Eggleston says, technology in the university's anatomy lab consisted of 20-inch CRT monitors that were well more than a decade old. "We're talking VHS stuff," says Mike Rocke, SCU's information systems manager. "We're talking VHS stuff.

" All of that changed in August 2012, when SCU undertook a major upgrade in its anatomy lab. Across the Board, Tech Is a Top Priority Bringing Science Up to Snuff. New Class(room) War: Teacher vs. Technology.