The Dining Club by IKEA 30&quot; Online shopping and Americans' purchasing preferences. America has long been a nation of shoppers, and that is as true online as it is in the physical world. 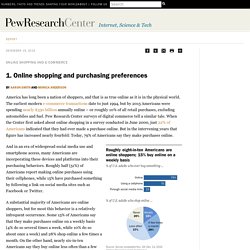 The earliest modern e-commerce transactions date to just 1994, but by 2015 Americans were spending nearly $350 billion annually online – or roughly 10% of all retail purchases, excluding automobiles and fuel. Pew Research Center surveys of digital commerce tell a similar tale. When the Center first asked about online shopping in a survey conducted in June 2000, just 22% of Americans indicated that they had ever made a purchase online. But in the intervening years that figure has increased nearly fourfold: Today, 79% of Americans say they make purchases online.

Smartphones: Making Us More Social Or Less? People use smartphones more often, and in a greater variety of ways, to contribute to -- and avoid -- group gatherings, according to new Pew research. 9 Ways Technology Is Slowly Killing Us All (Click image for larger view and slideshow.) 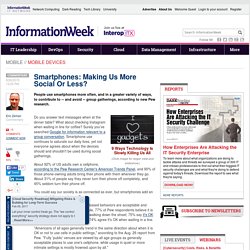 Do you answer text messages when at the dinner table? Second Home. Ace Hotel : A friendly place, continually new. Active In Style flagship store by Unibox, London – UK. Active In Style is a predominantly e-commerce business, sourcing and selling new and modern activewear for women. 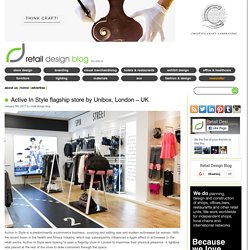 With the recent boom in the health and fitness industry, which has subsequently influenced a ripple effect in activewear in the retail sector, Active In Style were looking to open a flagship store in London to maximise their physical presence. A lightbox was placed at the rear of the store to draw customers through the space. The Ledge 65 Magnetik lightbox is an easy, cost-effective graphic display tool that is quick to refresh with new graphics and easy to re-configure the magnetic shelves and hooks. The New Anthropologie + Co in Walnut Creek - The Vintage Rug Shop The Vintage Rug Shop. This past Friday was a very exciting day for all East Bay-ers. 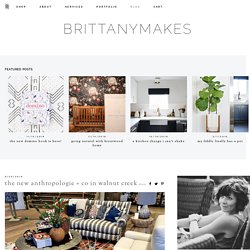 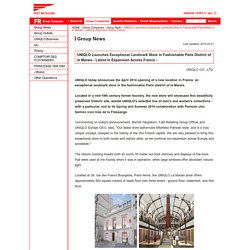 We are very pleased to bring this exceptional store to both locals and visitors alike, as we continue our expansion across Europe and worldwide. " Retail &amp; Leisure Archives. Hotel Saint George · Marfa TX · Home. A Look Inside The Goodhood Store's New Shoreditch Flagship. The Dining Club. Sensory Retail Design Report Short. MVRDV and ADEPT complete KuBe community center. Sep 02, 2016 MVRDV and ADEPT complete community center in copenhagen to encourage an active lifestyle MVRDV and ADEPT have completed ‘KuBe’, an activities hub in copenhagen that explores the themes of culture, health, and movement. facilitating both fixed and spontaneous programs, the building serves as a community space that focuses on developing a healthy lifestyle. internally, main volumes determine specific activities, while voids have been left without a defined use to let users interpret them in different ways. activity spills out into the community as a garden, which offers a variety of interactive environments. all images by adam mørk. 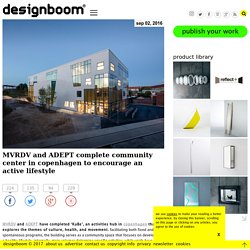 Coworking, Office Space - All Locations. Www.likeyou.com - Erneste Neto - There is Nothing Else to Be Seen, but the World - Galerie Yvon Lambert, Paris. Tutorial 9. Utopia Now: Life Off the Grid at a Modern-Day Commune. When I told a colleague at a dinner party about my summer travel plans, he replied, “Utopian communities? 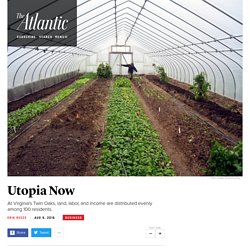 Are there any still around?” Actually, there are, though these days they prefer to call themselves “egalitarian” or “intended” communities. The Fellowship for Intentional Community lists more than 300 such examples of communal living in the United States and thousands worldwide. Only seven of those American sites qualify for recognition by the Federation of Egalitarian Communities (FEC). Communal living: Meet the millennials living and networking in modern communes. When the residents of The Collective communal living space in west London push open their front door they are greeted by a sign emblazoned with the words “Welcome Home!” 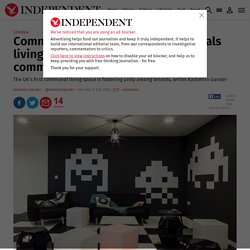 But don’t be fooled: the notice isn’t hand-carved out of wood by hemp-wearing hippies. It’s a glowing, old-school cinema-style sign, hanging in front of a wall of white neon lights. This is Generation Rent’s slick take on the commune. The first purpose-built co-living space of its kind in the UK, The Collective Old Oak is at the vanguard of a new housing model also being tested out in New York and other metropolitan US cities. Like similar US set-ups Pure House and WeLive – by the hugely successful WeWork workspace firm – the residents at The Collective stay in student-housing-style rooms with shared communal spaces. Anthropologie: On Our Way. The Dining Club by IKEA 60&quot; About - The Modern Society. Modern Society is a London based general store, dedicated to bringing a selection of luxury products from around the globe. 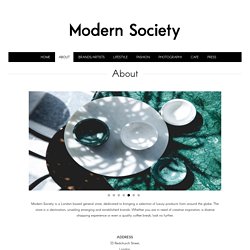 The store is a destination, unveiling emerging and established brands. Whether you are in need of creative inspiration, a diverse shopping experience or even a quality coffee break, look no further. ADDRESS33 Redchurch Street, London. Concept Store, Venue Hire, Urban Spa, Restaurant. The Store. About The Shop at Bluebird. Soho House. Goodhood. SUPER concept space - Shop, Eat, Meet in BIKINI Berlin. Deus Ex Machina. Ziferblat. You can pay for your lunch at this Covent Garden cafe with a 10 minute work out.

If you’re carrying more pounds round your waist than in your wallet, you might want to head down for lunch in Covent Garden. 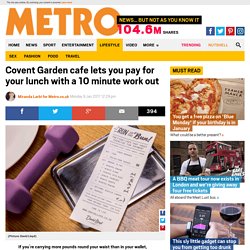 Because a pop-up cafe is launching this week where you don’t have to spend a penny and they’ll help you get fit. This 'gin and tonic' is perfect for Dry January Rather than splashing your cash on lunch, you pay for food by exercising. The Run For Your Bun Cafe claims to be ‘the first cafe that takes exercise for payment’. Wapping Wharf. Get ready: London's giant gin hotel will open next month. Furnished, Flexible Apartments. What is the circular economy? Minimising waste In a circular economy, products and materials are reused and production chains are redesigned to minimise waste and maximise the value of resources.

The idea of a circular economy has many different aspects, all looking towards being more careful with raw materials and natural resources. This includes more and new ways of recycling, but also a change in designing, manufacturing and using products to limit the use of raw materials. Beyond recycling Reorganising supply chains and changing processes of manufacturing and maintenance are just as much a part of the circular economy as sharing, rather than buying, rarely used products. Why a circular economy In the face of diminishing raw materials and resources, moving towards a circular economy is not only important for the environment, but also for business. Industries and companies The ways to a circular economy vary wildly. Circulair Buiksloterham Community. General Information – De Ceuvel. De Ceuvel is one of the most sustainable and unique urban developments in Europe De Ceuvel is an award-winning, sustainable planned workplace for creative and social enterprises on a former shipyard adjacent to the Johan van Hasselt kanaal off the river IJ in Amsterdam North.

In 2012, the land was secured for a 10-year lease from the Municipality of Amsterdam after a group of architects won a tender to turn the site into a regenerative urban oasis. The former industrial plot is a thriving community of entrepreneurs and artists, where all involved have lent a hand to build Amsterdam’s first circular office park. Roll for the Soul: Bristol's community bike cafe and workshop. Westberlin. About — Espresso Library. Breezy Bagel bar and LOFT clothing open new Loughborough store - Loughborough Echo. BrewDog to open beer-themed hotel after crowdfunding £19m. The Scottish brewer raised £19m of its £25m goal in its latest round of crowdfunding, which ended last week after running for a year. It was initially aiming to use the money to expand its UK bar estate, build a new Brewhouse and a beer-themed hotel in Aberdeen called The Kennel.

However, a spokeswoman for BrewDog told BigHospitality that despite falling short on funding the plans would still be going ahead. She said: “The £25m target was the upper limit of what we were able to raise in this round, and to reach £19m, with 42,000 craft beer obsessed shareholders in our ranks, is an absolutely incredible achievement and something we’re massively proud of. “Despite falling slightly short of the upper limit, all our future plans are still firmly set to go ahead as before.” Want To Escape The Modern World? 9 'Utopias' That Really Exist (PHOTOS) The idea of the “utopian” community has a long, storied history (and a largely unsuccessful one at that), from the fictional island dreamed up by Sir Thomas More to present-day attempts to build the perfect urban ecosystem.

This Dutch town will grow its own food, live off-grid, and handle its own waste. The Edge Is the Greenest, Most Intelligent Building in the World. Inside the connected future of architecture By Tom Randall | Sept. 23, 2015 From It knows where you live. It knows what car you drive. Coworking in Berlin. Unicorn.BerlinMitte.