The People, Ideas, and Things (PIT) Journal. For centuries, when someone thought about piracy they thought about boats, the sea, and scurvy—not computers, the world wide web, and viruses. 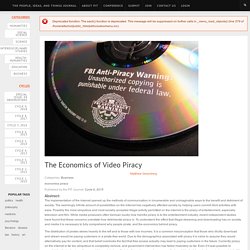 Today, though, online piracy is significantly more detrimental than maritime piracy. A 2010 study conducted by the One Earth Future (OEF) Foundation estimated that maritime piracy costs the global economy between $7 billion and $12 billion annually (Bowden, 2010). That same year the Directors Guild of America (DGA) estimated that global online piracy cost the United States economy $25 billion and 375,000 jobs a year (DGA, 2010). Streaming doesn’t stop stealing: New research on digital piracy. The issue: Most of us wouldn’t walk into a shop and pocket a DVD without paying for it. 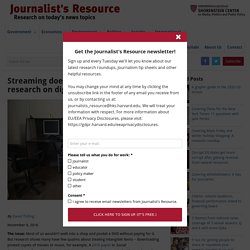 But research shows many have few qualms about stealing intangible items – downloading pirated copies of movies or music, for example. A 2016 paper in Social Neuroscience found less brain activity in an area typically associated with moral questions when people imagined illegally downloading copyrighted material than when they imagined stealing a physical object. Piracy wasn’t much of a problem for the entertainment industry until the 1990s and the birth of Napster, which allowed web users to share music files. Napster was stopped by court order in 2001, but other peer-to-peer sharing platforms steadily eroded the entertainment industry’s profits.

These days, streaming offers an alternative. An academic study worth reading: “Streaming or Stealing? Study summary: What makes people download pirated music? What Is Fair Use? - Copyright Overview by Rich Stim. In its most general sense, a fair use is any copying of copyrighted material done for a limited and “transformative” purpose, such as to comment upon, criticize, or parody a copyrighted work. 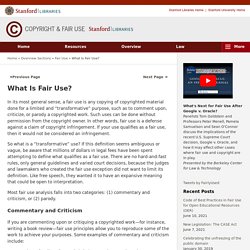 Such uses can be done without permission from the copyright owner. More Information on Fair Use. Fair use is a legal doctrine that promotes freedom of expression by permitting the unlicensed use of copyright-protected works in certain circumstances. Section 107 of the Copyright Act provides the statutory framework for determining whether something is a fair use and identifies certain types of uses—such as criticism, comment, news reporting, teaching, scholarship, and research—as examples of activities that may qualify as fair use.

Section 107 calls for consideration of the following four factors in evaluating a question of fair use: Guide to Personal Online Reputation Management. By Susan P. 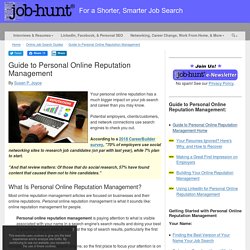 The advice provided here is also useful for others who may be further along in their careers. Many of us have devoted our careers to higher education, proudly watching class after class come in and work their way through college toward graduation. We support them with learning and extracurricular activities to develop well-rounded people. Those graduating this year are already turning their attention to recruiting fairs and future employment. EJ1118457. Cyberbullying across the Lifespan of Education: Issues and Interventions from School to University. The Online Disinhibition Effect, 20 Years Later.

As researchers like Norman Holland, Adam Joinson, and myself noted twenty years ago, people tend to say and do things online that they would not typically say and do in the in-person world. 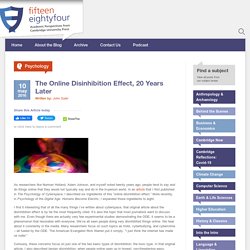 In an article that I first published in The Psychology of Cyberspace, I described six ingredients of this “online disinhibition effect.” More recently, in Psychology of the Digital Age: Humans Become Electric, I expanded those ingredients to eight. I find it interesting that of all the many things I’ve written about cyberspace, that original article about the disinhibition effect is by far the most frequently cited. It’s also the topic that most journalists want to discuss with me. Even though there are actually very few experimental studies demonstrating the ODE, it seems to be a phenomenon that resonates with everyone. Curiously, these concerns focus on just one of the two basic types of disinhibition: the toxic type. The Wild West Perhaps the focus on toxic disinhibition is a sign of our times. The Online Disinhibition Effect. Challenges in Addressing Plagiarism in Education. 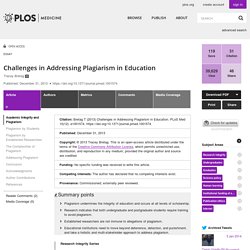 PLoS Med 10(12): e1001574. Published: December 31, 2013 Copyright: © 2013 Tracey Bretag. This is an open-access article distributed under the terms of the Creative Commons Attribution License, which permits unrestricted use, distribution, and reproduction in any medium, provided the original author and source are credited. Funding: No specific funding was received to write this article.

Competing interests: The author has declared that no competing interests exist. Provenance: Commissioned; externally peer reviewed. Summary points Plagiarism undermines the integrity of education and occurs at all levels of scholarship. EJ909069.

Related:  Ethical Online Behavior   -  What Is Fair Use? - Copyright Overview by Rich Stim   -  More Information on Fair Use   -  Education   -  Enterprise