Yeezy Spring 2016 Ready-to-Wear Collection. Kanye West only confirmed he was putting on a show last Saturday when his invitations went out, but save for his friend Riccardo Tisci’s 9/11 Givenchy presentation, Yeezy was the event of the week. 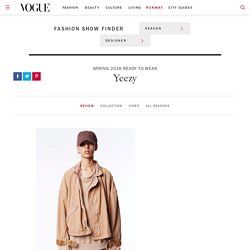 Outside beforehand, camera phone–wielding fans swarmed the VIP door, angling for a picture of Drake, Lorde, and Jaden Smith. Just as many people were trying to scoot past security without a ticket at the main entrance. Once inside, the setting was comparatively serene, but only until those celebrities and the designer’s family—Kim, North, Khloé, Kourtney, and Kendall—started to take their front row seats; from then on, it was pretty much pandemonium. West worked with performance artist Vanessa Beecroft for the second season going. ​is kanye showing a collection with givenchy tonight at new york fashion week? It has been rumoured for at least a month that Kanye West would be showing a second collection at New York Fashion Week, with most assuming that the snippets of information fit together to make a sophomore Adidas collab. 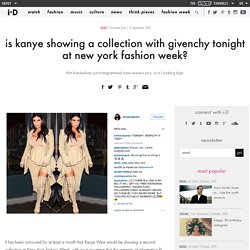 A load of cinemas across America had listings for a Kanye West Yeezy Season 2 Premiere tonight and, though most have been taken down, one cancelled listing remains. However, it now seems that the collaboration is with Givenchy, as Kim K instagrammed an outfit and footwear close-up this morning with the captions, "TONIGHT- GIVENCHY X YEEZY" and "SNEAK PEEK- YEEZY SEASON2". In the snaps, Kim wears an all beige outfit with a peplum skirt over her baby bump, a ruffled jacket and open toe and heel, over the knee heels… or possibly just a beige sandal with matching beige sports sock cover. The Givenchy show is scheduled for tonight at 11.30pm UK time (6.30pm American time) and i-D have the catwalk livestream, so watch this space! Kanye West x Adidas Yeezy Season 1. Yeezy Season 1: How to Shop Kanye West's First Collection for Adidas.

In this era of collaboration, it's not rare to hear a celebrity attach themselves to a major brand — or vice versa. 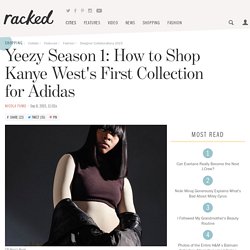 Roots From Above: "Humus" by Giuseppe Licari. A spacious gallery can make for the most dramatic installation. 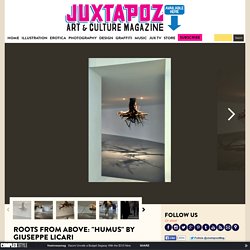 Rotterdam-based artist Giuseppe Licari created this fantastic installation, Humus 2012, at Tent Rotterdam, which features tree roots hanging from the ceiling. Licari invites the public to participate, share, experience and interact, creating a collective memory, making it the central point of his work. Photos by Job Janssen & Jan Adriaans. All images and texts are copyright of Giuseppe Licari unless stated differently © 2012 via designboom.

Selfridges. "Not a mannequin in sight, our challenge with Agender was to create windows without using any gender forms. 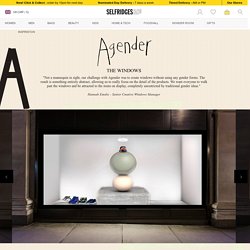 The result is something entirely abstract, allowing us to really focus on the detail of the products. We want everyone to walk past the windows and be attracted to the items on display, completely unrestricted by traditional gender ideas. " Hannah Emslie - Senior Creative Windows Manager. SUS - Sick Urban Streetwear.

Kanye West x Adidas Yeezy Season 1. Release Date for Kanye West's Yeezy Season 1 Collection. 'Men Buy, Women Shop': The Sexes Have Different Priorities When Walking Down the Aisles. When it comes to shopping, women are from Nordstrom’s and men are from Sears. 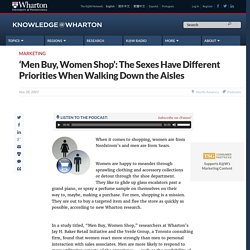 Women are happy to meander through sprawling clothing and accessory collections or detour through the shoe department. They like to glide up glass escalators past a grand piano, or spray a perfume sample on themselves on their way to, maybe, making a purchase. For men, shopping is a mission. They are out to buy a targeted item and flee the store as quickly as possible, according to new Wharton research.

In a study titled, “Men Buy, Women Shop,” researchers at Wharton’s Jay H. “Women tend to be more invested in the shopping experience on many dimensions,” says Robert Price, chief marketing officer at CVS Caremark and a member of the Baker advisory board. As one female shopper between the ages of 18 and 35 told the researchers: “I love shopping. Price says women’s role as caregiver persists even as women’s professional responsibilities mount. 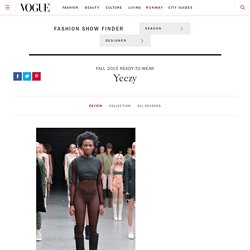 That Grammys ceremony said it all: the strongest musical performances of the night undermined by the assholery that would deny another artist his well-deserved moment in the spotlight. West's collaboration with Adidas launched tonight in a similar storm of conflicted emotion. "I'm here to crack the pavement," his fierce voice-over announced. "I want to create something better for you. " But a show that started this willfully late in a schedule as dense as New York's spoke to a certain insensitivity. 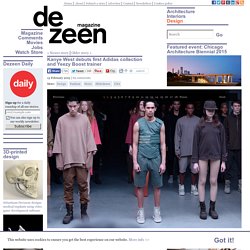 Kanye West's line for Adidas' Originals brand was unveiled at a show to mark the beginning of New York Fashion Week last night. Yeezy Season 2 NYFW Show. Adidas Originals x Kanye West. Yeezy Season 2 Is Still Going to Be Pricey. If you were hoping that Kanye West would fulfill his earlier promises to make his clothing affordable (and were disappointed with the prices for Yeezy Season 1), don't hold your breath. 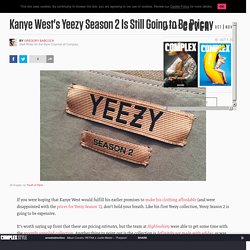 Exclusive: Kanye West Talks Yeezy Season 2, Presidential Run, and Swea. Outside the Mercer hotel at 4:30 P.M. on Wednesday, September 16, the scene was chaos, with squads of paparazzi and camera-phone-wielding fans tumbling into the cobbled SoHo streets. 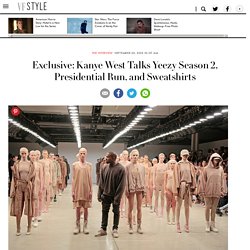 Inside, the object of their attention lay stretched across a sofa in a corner of the crowded lobby and appeared to sleep. Four hours earlier, Kanye West had unveiled the second season of his Yeezy clothing line at a live New York show that was also streamed to 40 movie theaters across the globe, and seven days of round-the-clock preparations had caught up with him. As West readily acknowledges, the Yeezy concept is in its early stages, but with its muted color palette, insistent focus on elevating everyday staples like sweatshirts and army jackets, and diverse cast of models, his presentation was much closer to the way we live now than many of the more established shows that took place during New York Fashion Week. Vanity Fair: Was it harder or easier this time? Kanye West: It was calmer. It’s family first. Adidas Group makes it to the podium of most sustainable companies worldwide. The adidas Group ranks third among the Global 100 Most Sustainable Corporations in the World (Global 100 Index).

The results were announced last night by Corporate Knights, a Toronto-based media and investment advisory company, during the World Economic Forum in Davos. The adidas Group was recognized as best European company by Corporate Knights and as leader in its industry. We are absolutely excited about the recognition ‎our sustainability efforts are receiving. The nomination as one of the world's most sustainable companies underlines the great work our teams have been doing over the last years and the positive impact we have made.

Through our work, we will continue to push boundaries as we strive to lead the way towards a sustainable future for our company and the entire industry.Herbert Hainer, adidas Group CEO. Companies named to the Global 100 index are the top overall sustainability performers in their respective industrial sectors. For full rankings please visit: .