This study is reliable; it was published by Current Directions in Psychological Science. The author's agenda seems to be to prove that some children have a greater biological sensitivity to context. Though in some ways it is relevant, it appears to focus on children and stress, so i think I will not read it fully. – jenadkins 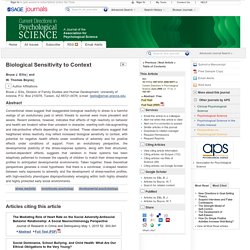 Box 210078, Tucson, AZ 85721-0078; e-mail: bjellis@email.arizona.edu. Conventional views suggest that exaggerated biological reactivity to stress is a harmful vestige of an evolutionary past in which threats to survival were more prevalent and severe. Recent evidence, however, indicates that effects of high reactivity on behavior and health are bivalent rather than univalent in character, exerting both risk-augmenting and risk-protective effects depending on the context. . © 2008 Association for Psychological Science. Adult Shyness: The Interaction of Temperamental Sensitivity and an Adverse Childhood Environment.

This is an article on adverse environments in childhood creating significant effects in shyness for people in their adulthood. The article seems geared toward adult shyness which I am largely uninterested in. While seemingly reliable as it is vetted by the APA, this is not relevant to my audience. – jenadkins

Traditional versus Open Office Design. A Longitudinal Field Study Abstract Research in open office design has shown that it is negatively related to workers’ satisfaction with their physical environment and perceived productivity.

This is a longitudinal study on the effect of office space design on the worker. It seems reliable and worth reading, but on second look, teacher often have few options of creating spaces in the classroom, so I think it is not as relevant as I initially thought. I will not read fully. – jenadkins

A longitudinal study was conducted within a large private organization to investigatethe effects of relocating employees from traditional offices to open offices. 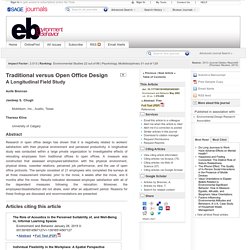 A measure was constructed that assessed employees’satisfaction with the physical environment, physical stress, coworker relations, perceived job performance, and the use of open office protocols. The sample consisted of 21 employees who completed the surveys at all three measurement intervals: prior to the move, 4 weeks after the move, and 6 months after the move. Margaret Heffernan: Why it's time to forget the pecking order at work.

This is a tedtalk on re-thinking workers and and their value. Although Ms. Heffernan is clearly an authority and expert on leading people and teams in the workplace, I will not watch fully, as I think I will stick to the classroom environment, when addressing my colleagues. – jenadkins

This is a list of tips for teachers on inclusion of introverted students. It was published in a Canadian educator magazine. Although it looks interesting to me personally, there is no real research or empirical data here. I will NOT fully read. – jenadkins 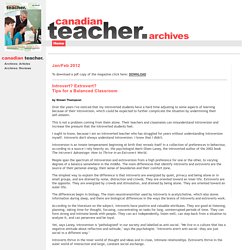 Tips for a Balanced Classroom by Shawn Thompson Over the years I've noticed that my introverted students have a hard time adjusting to some aspects of learning because of their introversion, which could be expected to further complicate the situation by undermining their self-esteem. This is not a problem coming from them alone. I ought to know, because I am an introverted teacher who has struggled for years without understanding introversion myself. Introversion is an innate temperament beginning at birth that reveals itself in a collection of preferences in behaviour, according to a source I rely heavily on, the psychologist Marti Olsen Laney, the introverted author of the 2002 book The Introvert Advantage: How to Thrive in an Extrovert World. The differences begin in biology. According to the literature on the subject, introverts have positive and valuable attributes.

This appears to be a short blog from a teacher's perspective on an introverted student. Although it looks interesting to me personally, it is entirely anecdotal; there is no real research or empirical data here. I will NOT fully read. – jenadkins 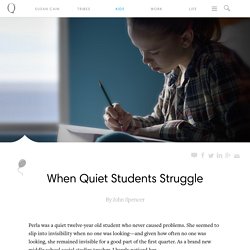 As a brand new middle school social studies teacher, I barely noticed her. Global Superpower: Is the Best of the Best Really the Best? This article accompanies the feature "Never Too Young: The International Baccalaureate Program Goes Down a Grade. 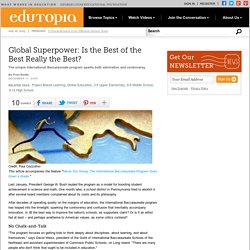 " Last January, President George W. Bush lauded the program as a model for boosting student achievement in science and math. One month later, a school district in Pennsylvania tried to abolish it after several board members complained about its costs and its philosophy. After decades of operating quietly on the margins of education, the International Baccalaureate program has leaped into the limelight, sparking the controversy and confusion that inevitably accompany innovation. Is IB the best way to improve the nation's schools, as supporters claim? No Chalk-and-Talk "The program focuses on getting kids to think deeply about disciplines, about learning, and about themselves," says David Weiss, president of the Guild of International Baccalaureate Schools of the Northeast and assistant superintendent of Commack Public Schools, on Long Island.