Electronics. Introduction Hardware 433 MHz pulses are detected by a hardware receiver connected to various different ports (GPIO, USB, …). a) On the pilight website, there is a list of proven receivers to work well. 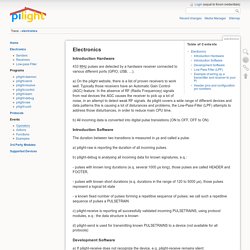 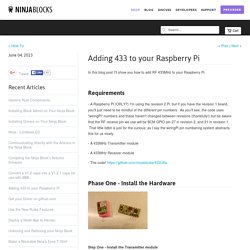 Requirements - A Raspberry Pi (ORLY?) Wiore. Decoding 433MHz RF data from wireless switches. [Update 2013-03-01] I have added more documentation on the codes these remotes use in a different post. 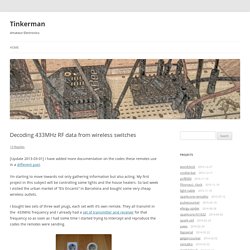 I’m starting to move towards not only gathering information but also acting. My first project in this subject will be controlling some lights and the house heaters. So last week I visited the urban market of “Els Encants” in Barcelona and bought some very cheap wireless outlets. I bought two sets of three wall plugs, each set with it’s own remote.

They all transmit in the 433MHz frequency and I already had a set of transmitter and receiver for that frequency so as soon as I had some time I started trying to intercept and reproduce the codes the remotes were sending. Sample outlets from each set plus remotes In the image above you can see an outlet and the remote for each of the sets. The right one is branded “Avidsen” and rated 1000W, just below the consumption of my house electrical heaters, but good to control lights and other appliances. Safe Automated Mains Sockets. What's this all about? 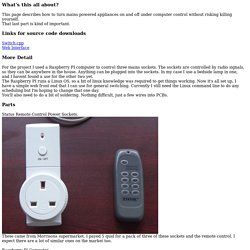 This page describes how to turn mains powered appliances on and off under computer control without risking killing yourself. That last part is kind of important. Links for source code downloads Switch.cppWeb Interface More Detail For the project I used a Raspberry PI computer to control three mains sockets. Parts Status Remote Control Power Sockets. These came from Morrisons supermarket. Raspberry PI Computer. This is ideal for this kind of project for lots of reasons. A Floppy Disk Drive Cable. 433MHz Transmitter and Receiver Modules This may look complicated but it isn't as bad as it seems. 1M Ohm Resistor That's just a random picture of a resistor, not the actual 1M one I used.

Optional Items. One IC socket. One piece of stripboard 3 x 2 holes with the strips going the short way. One Breadboard This was used to plug the receiver into while capturing the remote codes. One 3.5mm socket. One 5V power supply. Temporary Items One PC. Building the system The transmitter system. Decode 433 MHz signals w/ Raspberry Pi & 433 MHz Receiver. This post will show you how to read 433 MHz codes using a Raspberry Pi. 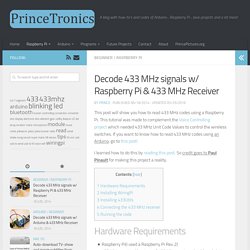 This tutorial was made to complement the Voice Controlling project which needed 433 MHz Unit Code Values to control the wireless switches. If you want to know how to read 433 MHz codes using an Arduino, go to this post! I learned how to do this by reading this post. So credit goes to Paul Pinault for making this project a reality. Raspberry Pi(I used a Raspberry Pi Rev.2)433 MHz receiver(Any type of 433 Mhz receiver should work, but for this tutorial I used a 4 pin variant)A breadboardSome jumper wiresA 433 MHz transmitter(I used a 4 channel 433 MHz transmitter Remote) WiringPi is needed to control the pins on the Raspberry Pi. To install WiringPi, SSH into your Raspberry Pi or open up a console, then run these commands: cd ~/ git clone cd wiringPi .

After running the last command, WiringPi should be installed! 433Utils is made by GitHub user wolfeidau. To install 433Utils, run these commands: OLS - alternative Java client. Welcome to the project page of Logic Sniffer Java client. 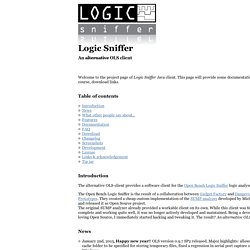 This page will provide some documentation and, of course, download links. Table of contents Introduction The alternative OLS-client provides a software client for the Open Bench Logic Sniffer logic analyser hardware. 433 MHz projects. This page is about reverse engineering protocols used in simple AM RF modules at 433 MHz. 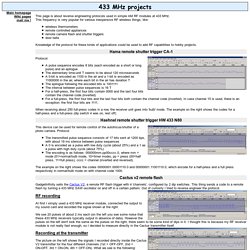 This frequency is very popular for various inexpensive RF wireless things, like: wireless thermometers remote controlled appliances remote camera flash and shutter triggers door bells Knowledge of the protocol for these kinds of applications could be used to add RF capabilities to hobby projects. Protocol: A pulse sequence encodes 8 bits (each encoded as a short or long pulse) and an epilogue The elementary time-unit T seems to be about 120 microseconds A 0-bit is encoded as 1100 in the air and a 1-bit is encoded as 11000000 in the air, where each bit in the air has duration T The epilogue following the encoded bits is 1001111 The interval between pulse sequences is 16 T For a half-press, the first four bits contain 0000 and the last four bits contain the channel code (inverted) For a full-press, the first four bits and the last four bits both contain the channel code (inverted).